In 2020, the state Department of Agriculture began issuing licenses to grow and process hemp.

The Green Toad Hemp Farm, the state’s first Black-owned facility to grow the controversial plant, has quickly become one of Georgia’s leading hemp producers since receiving its license in 2020.

“I didn’t know what I was doing but here we are,” said Dwayne Hirsch, the farm’s chief operating officer. “It’s been a great business for us,” 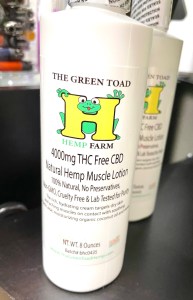 But agriculture wasn’t always the goal. The two took different paths to become part business owners. Hirsch said that they first met in the late 2000s when he was working with Reese, then a regional vice president for Walmart in Ill., to get his beverage products on the shelves. That company was ultimately unsuccessful, but the two kept in touch.

What first interested Reese to find out more about CBD was his own relationship with traditional medicine. After several back and hip surgeries that caused chronic pain, he became dependent on opioids. CBD products, however, eased his pain and relieved him of the dependency he developed on prescription medicine.

Hirsch moved to Denver shortly after Colorado legalized marijuana and learned about the booming industry so he could set up an operation in his hometown of Chicago. The father of a son with autism, Hirsch was most intrigued by the plant affects on the illness.

“I needed to pursue this to prove something that I believed to be true — that CBD and cannabis could help resolve certain symptoms related to the autism spectrum,” Hirsch said.

Hirsch later heard that Reese purchased land in Metter, and he wanted to pitch the opportunity to be his consultant.

Inspired by the loud green toads that lived in the fountain of Reese’s Atlanta area home, The Green Toad Farm has become a licensed and fully functional agricultural entity with an entire season of hemp cultivation under its belt.

As a first-generation farmer, Hirsch was not privy to the ongoing treatment African American farmers had experienced from the U.S. Department of Agriculture. Practices including redlining and loan discrimination have led to minorities making up less than two percent of landowners in the U.S.

Hirsch told SaportaReport that by adding hemp to their crop portfolios could help Black farmers overcome the current economic climate and reduce the chances of losing their property.

It’s been two years since The Green Toad Hemp Farm received one of the first licenses from the state to grow low-level THC hemp under the Georgia Hemp Farming Act that passed in 2019. 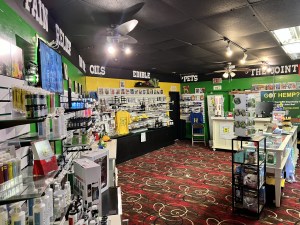 The Green Toad Hemp store has a large selection of hemp and CBD-related products made on their farm in Metter, Ga. (image by Allison Joyner.)

Hirsch believes in the restorative properties of the crop, both physically and socially. Although the Second Chance Hemp Act, which would allow those with legal issues to grow industrial hemp, failed to pass this session he hopes it will be presented next year.

“They could go out and farm any other agricultural commodity and hemp is no different. It offers a lot of greater benefits to the community that we now understand,” Hirsch said.

As for their crop, Hirsch and Reese have produced over 50 items that they create and assemble right on the farm. From creams to clothing, The Green Toad’s two locations in Metter and on McDaniel Street in Southwest Atlanta houses the world’s largest supply of Delta 8 pre-rolled joints.

“It’s done from our sacrifice driven by our love for our own health and daily wellness. I love to see that for other people to be able to have that and for all of us to have an opportunity to advance our professional interests in the future,” Hirsch said.

Hirsch is working on expanding the company for franchising opportunities for future retail stores and help entrepreneurs bring health and wellness to the world in a way that is affordable, manageable and sustainable. 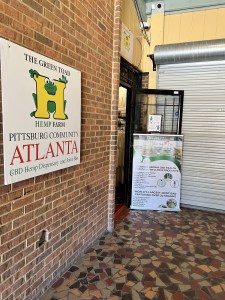 The main entrance of The Green Toad Hemp Store is located in Southwest Atlanta. (image by Allison Joyner.)

“Our intent is to be a diligent operator within our community and one that can be a platform for inspiration for others,” Hirsch said.

He said that he never imagined being a farmer when he grew up in the Southside of Chicago.

“It’s funny,” he said, “because you think about the toys that we played with are the ones that we gravitate towards. I didn’t have tractors as toys. I had to overcome a fear of the woods to be able to live out here. Now I live in a camper in the middle of nowhere,” Hirsch said.

In addition to their stores, products from The Green Toad Hemp Farm are available on their website.