Georgia’s deficit of jobs was 372,300 in March 2014 and Georgia companies employ fewer workers than before the recession began as they continue to hire slowly, according to a report released Thursday by the Georgia Budget and Policy Institute. 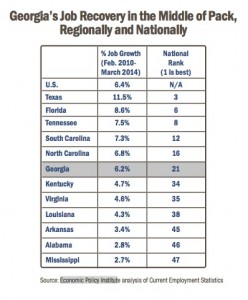 Georgia ranks in the middle of the pack of southern states in terms of job creation rates. Credit: GBPI

To fill the gap by March 2017, the GBPI report states: “Georgia’s economy would need to add an average of about 13,000 jobs per month. Georgia averaged only 5,670 jobs per month over the past year.”

The GBPI findings on employment trends are in line with those contained in the April 16 Beige Book, released by the Atlanta district of the Fed. The Fed report states: “Firms continued to show a preference for implementing technology to increase output as opposed to adding staff.”

GBPI’s report calls on policymakers to address the situation by increasing spending on education, transportation and the social safety net. These structures attract employers, and employees are more productive when they have the skills and resources to manage their lives, according to a brief that accompanied the report.

Prepared by Wesley Tharpe, GBPI’s tax and economic policy analyst, the report is a mid-year update to the institute’s annual “State of Working Georgia” report, which typically is released in August. 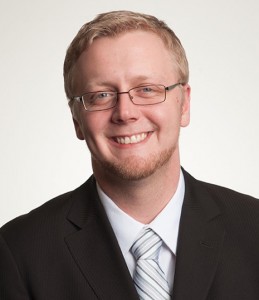 Georgia’s rate of job growth was lower than any of the adjacent states, and fell in the middle of the pack of 12 southern states, the report by Tharpe notes, citing research by the Economic Policy Institute.

Nationwide and in Georgia, the rate of long-term unemployment is especially worrisome. A growing body of research indicates that the longer a person is out of the workforce, the less like it is that person will ever be hired.

The report cites a story published on theatlantic.com in April 2013. The story relates research into unemployment by three academicians – one at the Boston Fed and two at Northeastern University, and concludes:

The picture in Georgia is no different, according to Tharpe’s research into the unemployment rate for those out of work for six months or longer:

Previous Article
Former Pennsylvania Gov. Rendell tells Atlanta leaders to act like a region
Next Article
Philadelphia reinvents itself from manufacturing to ‘eds and meds’