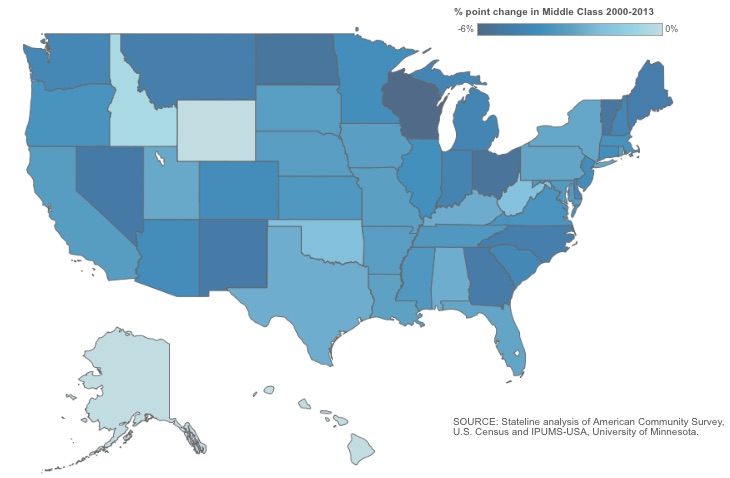 A report released today by Pew Charitable Trust shows that Georgia’s middle-class has shrunk since 2000 – even as the benchmark, which is median household income, plummeted by 18 percent during the period.

Here are the numbers: 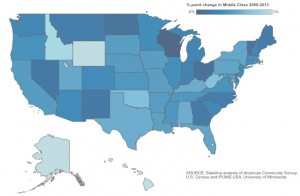 Georgia’s middle class has shrunk even as the benchmark, median household income, has plummeted. Credit: pewtrusts.org

Share of household spending at least 30 percent of income on housing:

The analysis produced by Pew’s Stateline shows the middle class shrank in all 50 states. The median household income declined during the period in most states.

Pew’s report speaks to a growing discussion over job growth and wages.

Jim Clifton, CEO/chairman of Gallup, and Daniel Quinn Mills, a professor of business administration at Harvard University, spurred some lively debate with their recent observations on unemployment.

Clifton offered several examples to support his premise, include this:

Clifton backed off his contention a week later, telling CNBC that he feared he may “suddenly disappear, I need to make it home tonight,” if he contested the accuracy of unemployment rates reported by the federal government.

In an op-ed published in The Wall Street Journal, Mills contests the government’s practice of adjusting employment figures based on seasonal conditions. That may have made sense when adopted 70 years, when:

Mills began his piece with this statement:

Pew’s analysis is based on data collected in the Census Bureau’s American Community Survey and the University of Minnesota’s IPUM project, with the acronym standing for Integrated Public Use Microdata Series.

The federal standard for housing affordability is 30 percent of household income.