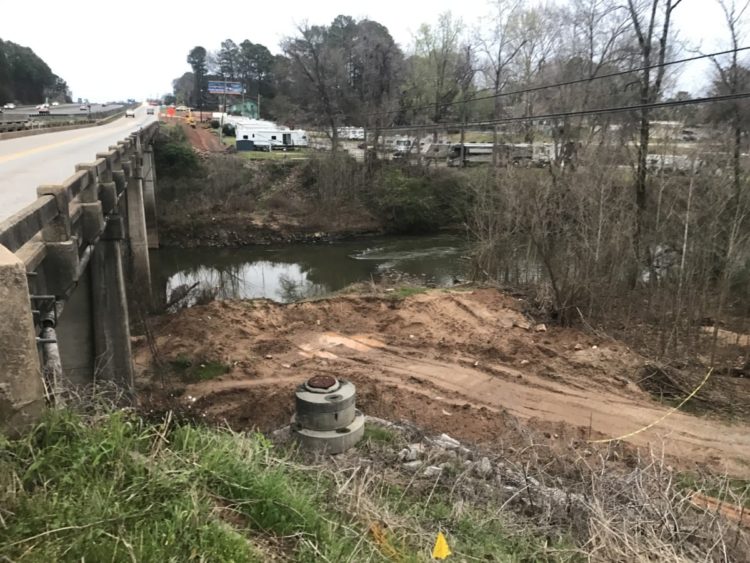 The Yellow River Water Trail passes beneath I-20 in Newton County. Access is being improved to Abe's Landing. Credit: David Pendered

At the end of a dirt path that touches the Yellow River in Newton County, one piece of the future of Georgia’s network of water trails is taking shape – a network that now has the blessings of the state House of Representatives. 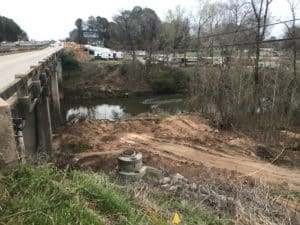 The Yellow River Water Trail passes beneath I-20 and this secondary road in Newton County. Access to the water trail is being improved at this site, Abe’s Landing. Credit: David Pendered

Abe’s Landing is at mile 33 of the 53-mile Yellow River Water Trail. The water trail begins near Lilburn, at Five Forks Trickum Road, and ends at Jackson Lake. According to a description of the water trail, it passes beneath bridge columns that date to the Civil War; a working train trestle; and I-20, where Abe’s Landing is being improved. Critters living along the water trail include great blue heron, North American river otters and American Beavers.

“We try to bring in anybody and everybody,” said Gwyneth Moody, director of programs and outreach for the Georgia River Network

The House approved a resolution March 9 that endorses efforts by the Georgia River Network and its partners to create water trails. The resolution provides no funding. But in a state that doesn’t provide funding for a statewide water trails program, the resolution sponsored by Rep. Spencer Frye (D-Athens) is seen as a  step in the right direction. 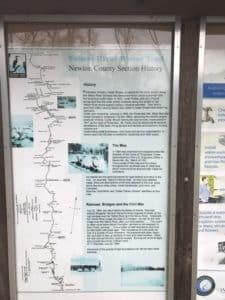 This sign at Abe’s Landing goes beyond the level of information the Georgia River Network requires of established water trails. This sign provides history of the area. Nearby panels provide information about river etiquette and paddling safety, and a map of the water trail. Credit: David Pendered

“It’s a show of support, especially given that some of the legislators who passed the resolution have not been supportive of some of the environmental issues that have come to the table,” Moody said. “It was nice of them to show support, and recognize the importance of highlighting the value of water trails.”

A water trail in Georgia is established by a stakeholder group, which often is comprised of volunteers and a local entity, typically a government. Governments are natural partners because their employees interact with waterways via water and sewer services, police, fire, and emergency medical services.

Established water trails must meet six criteria established by the Georgia River Network. According to a report on GRN’s website, the criteria include:

HR 281 cited the economic impact of water trails as one reason the House endorsed the concept.

Pennsylvania’s network of water trails includes the Lewiston Narrows, part of the old Pennsylvania Canal that was to connect Pittsburgh and Philadelphia but was surpassed by faster rail service. Credit: David Pendered

“People come to an area to get on a water trail and spend money in restaurants, coffee shops, hotels and gas stations, and all of that benefits the community, “ Moody said. “One thing we encourage is for partnerships to incorporate other points of interest into marketing materials, so when people come they have other things to do. They may spend a day paddling and decide to stay an extra day to see an awesome nature center or other destination.”

As Georgia continues to develop water trails, it is joining a nationwide movement, Moody said.

“Water trails are definitely growing to not only increase opportunities for recreation in a community, but to increase health and well-being,” she said.

Pennsylvania, for example, has an incredible existing resource in the form of the Pennsylvania Canal. Built in the 1800s, the canal was to link Pittsburgh with Philadelphia and eventually stretched 1,243 miles, though segments weren’t operated concurrently. 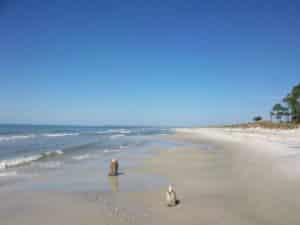 Although it collapsed economically in the face of competition from railroads, portions of the canal system remain open for recreational use, including the Lewiston Narrows, which was part of the 123-mile Juniata Division.

Florida has the 1,515-mile-long Circumnavigational Saltwater Paddling Trail. The state refers to it as a, ”strategic long-term priority of the Florida Department of Environmental Protection.” The trail stretches from near the Alabama border, around the peninsula, to the Georgia border.

Florida’s saltwater trail is part of an 800-plus mile coastal trail that connects the Chesapeake Bay and the Georgia-Florida border. Florida extended the Southeast Coast Saltwater Paddling Trail all the way around the peninsula.

“Florida is a role model, but we have 70,000 miles of rivers and streams in Georgia,” Moody said. “We have amazing rivers – the Flint, with blue springs; the Alapaha has sink holes; the Altamaha is the little Amazon. And right under our nose, the Chattahoochee.”

Previous Article
Diversity and Space to Innovate: Keys to Creating Georgia’s Next Generation of Entrepreneurs
Next Article
A generational walk through the health care debate