Late Sunday, Brad Raffensperger disputed facts about the election and voting that were touted by the president and his party

Georgia’s Secretary of State Brad Raffensperger has had his hands full ensuring the state finishes its risk-limiting audit this week. But in the meantime, he’s working to debunk election and voting myths from his own Republican Party and outgoing president Donald Trump. Raffensperger began posting information on his Facebook page late Sunday night and continued into Monday. 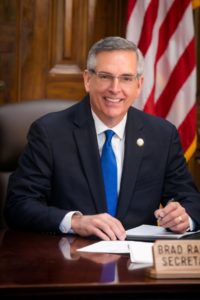 “My office will fight any and all federal overreach to take over Georgia’s elections — regardless of party,” Raffensperger said in one post. “This is about states’ rights. No federal takeover. Georgia voters deserve free and fair elections.”

Here are a few of the myths Raffensperger has tackled:

If there’s anything Raffensperger has repeated since the week of Nov. 3, it’s that there’s no conspiracy on the part of elected officials to steal the election. To prove that, Raffensperger said county elections must allow Georgia voters to view the audit process.

That includes allowing monitors for both Democrat and Republican parties to watch the count and audit being conducted over the past week.

“Are you showing up to the recount and find yourself in the back? The state of Georgia placed the responsibility of recruitment of monitors solely on both parties,” Raffensperger said in a post. “Don’t have credentials? Call your state party and demand monitor credentials. Find them horribly disorganized? Show up to their office and demand credentials.”

Raffensperger echoed the same message just a few days before in a separate post:

“The state parties name monitors. If party officials claim they don’t have monitors on-site — and are not being let in — it is because the party didn’t provide them credentials. It’s their responsibility — if they fail to credential people properly, email us as soscontact@sos.ga.gov and we will make sure you have access,” Raffensperger said in the post.

In 2019, Georgia passed a law that made it illegal for third-party groups to collect ballots and submit them as a group. The law only allows for the voter, a relative, in-law, or caregiver to submit their ballot. An imprisoned voter may get an employee of their jail to deliver their ballot.

Raffensperger also noted photo ID was required for ballots uploaded to the state’s absentee ballot portal and that his office trained election officials on GBI signature matches, which is confirmed twice before a ballot is cast.

In an interview with WSB-TV on Tuesday, Raffensperger said it was likely Trump’s disinformation about mail-in voting that cost him the election.

Myth: There were discrepancies in Georgia’s exact signature match system

An increased number of ballot rejections or inaccuracies has led some to believe the state conspired to have votes thrown out. Raffensperger broke down the number of ballots rejected dating back to 2016, with percentages indicating the rate of rejection is only slightly higher than 2016’s election cycle.

Georgia is expected to finish its audit this week. However, early voting begins in Senate runoff elections next month. More information can be found on the Georgia Secretary of State website.