A New York credit rating agency has named Georgia as the state to watch for its efforts to control the spiraling cost of higher education. 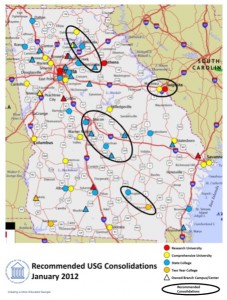 Moody’s Investors Service has tagged Georgia as a state to watch for the outcome of the consolidation of universities. This map shows the proposal for the first four mergers. Credit: Board of Regents

Moody’s Investors Service highlighted Georgia’s consolidation of universities as an example of a state’s attempt to improve the fiscal efficiency of its university system. Georgia was the only state singled out.

Moody’s report stands in contrast to the current debate over post-secondary education in Georgia’s gubernatorial campaign. Gov. Nathan Deal and Sen. Jason Carter appear to be focused on the role of lottery-funded HOPE scholarships in subsidizing the cost of advanced academic and technical education, rather than the system’s structural challenges.

Most recently, Deal announced a proposal to allow HOPE scholarships to pay for additional programs in technical schools. Carter characterized the plan as a hollow attempt to make up for previous cuts to the state’s Technical College System. The Legislature restored some of the funding cuts in 2013.

Moody’s report in July focused on the severe fiscal pressures facing the nation’s colleges and universities. The report extends the negative outlook Moody assigned the entire higher education sector in 2013.

Here’s what Moody’s said of Georgia:

This single sentence ended a paragraph that outlined some of the broad strokes college administrators could take to address their bottom line. The full paragraph reads:

The budget request approved last month by the Board of Regents suggests the anticipated cost savings have yet to appear in the bottom line.

The board adopted a budget that would increase spending by 2.5 percent, compared to the state appropriation to the university system for the fiscal year that began July 1. In addition to adopting a $1.99 billion funding request to operate the system, the regents adopted a separate $254.8 million funding request for capital improvements.

According to a statement the board released Sept. 9:

Georgia Chancellor Henry “Hank” Huckaby has guided the Board of Regents down the path of consolidation since his appointment in 2011.

Huckaby was heralded for his long career in state finance, which the board highlighted when it announced his selection as chancellor:

Mergers are not new to academia, though they are more common in the corporate world. A handful of other mergers were cited in a number of stories in 2013, when Georgia’s full embrace of consolidation captured attention at a time the impact of the recession on university systems was becoming more widely known.

Previous Article
If the U.S. Senate race and the governor’s race end up in run-offs, Georgia will be in nation’s spotlight
Next Article
Georgia’s beauty all around us — a trip to Cave Spring