A group of German aerospace engineers are to tour the booming aviation industry in Georgia and Alabama after attending a science seminar Monday at Georgia Tech. 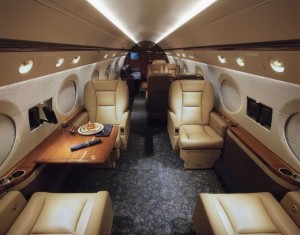 Office work can be done in this plush setting aboard the Gulfstream G650 aircraft, while cruising at 685 mph for more than 8,000 miles on a single fueling. Credit: privatejetseurope.com

The scientists are traveling in a group of about 50 individuals, all of whom are part of a broader trade mission that seeks to foster relations among German engineers and manufacturers and their U.S. counterparts. The trip’s being coordinated by the German American Chamber of Commerce in the Southern U.S.

These conversations underscore the tremendous advancement in the aerospace industry since aviation pioneer Charles Lindbergh flew his first solo flight in Georgia, in 1923 from Souther Field, in Americus. Four years later, Lindbergh entered the annals of history with his transatlantic flight from New York to Paris.

More than a dozen speakers are scheduled to cover topics including the future of unmanned aircraft, advances in information and communications technology, and new materials.

The speakers’ titles acknowledge the advanced technology that goes into modern aircraft: 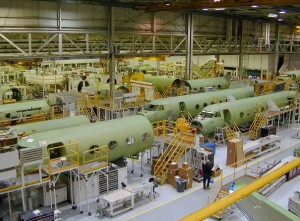 Gulfstream’s plant in Savannah provided nearly a third of the entire list of billings built by the U.S. aerospace industry, according to a trade publication. Credit: madmikesamerica.com

“The presenters are basically engineers and scientists working on the future of aircraft, their design, and what needs to be done to make them more efficient,” Nico Rudolph, a senior coordinator with the German American chamber, said May 30.

Rudolph’s point was that this crowd is focused on improving the performance of aircraft. They are not addressing issues such as trade between Germany and the U.S., or how to pack more trade goods onto a plane.

“It’s more about the exchange of ideas and concepts, and the future cooperations that might be possible between Georgia Tech and Bavarian universities,” Rudolph said. “It’s more about physics, and the science behind aircraft.”

Once done with the seminar and networking, the scientists will visit centers of aerospace technology including the University of Georgia and the Mercer Engineering Research Center in Warner Robins.

But it’s through site visits to manufacturing centers in Savannah and Mobile, Ala. that the scientists will see how aerospace technology is being put to practical use.

The Gulfstream plant in Savannah is booming and is a big reason Georgia has climbed to No. 4 among states that report aerospace exports, according to a report by Georgia’s Department of Economic Development. 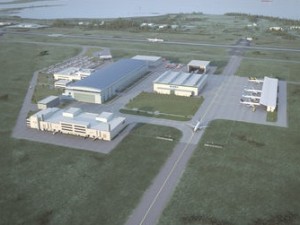 Airbus planned to build up to 50 aircraft a year at its plant in Mobile, Ala. when it released this rendering in 2012. Credit: airbus.com

Gulfstream’s latest aircraft is its new flagship, the G650, a $65 million aircraft that now has a four-year waiting list, according to ainonline.com. The plane is able to cruise from Atlanta to Baghdad, Iraq, in less than 10 hours. Then it could fly the 1,800-plus mile to Rome, Italy, without the need to refuel.

Gulfstream’s business is so strong that the company’s $7.354 billion in billings in 2013 accounted for nearly a third of the entire list of billings reported by the nation’s 31 aircraft manufacturers to the General Aviation Manufacturers Assoc., according to ainonline.com.

And there’s no slowdown in sight at Gulfstream. The company’s billings in the first quarter of this year reached $2.05 billion, up from $1.51 billion in the same period of 2013, according to ainonline.com.

In Mobile, the trade delegation will visit a $600 million Airbus manufacturing plant that is about halfway complete. Construction is to be complete in 2015 and the first A320 is to be delivered from the assembly line in 2016, according to airbus.com.

Airbus’ description of the A320, priced upwards of $100 million each, is aimed at the growing market for planes that serve trips of short- to medium-distances. As the international market matures, U.S. airlines are looking to the domestic market to grow profits, according a Rajeev Dhawan, head of Georgia State’s Economic Forecasting Center.