‘Get Out’ melds humor, horror in a race-conscious screenplay 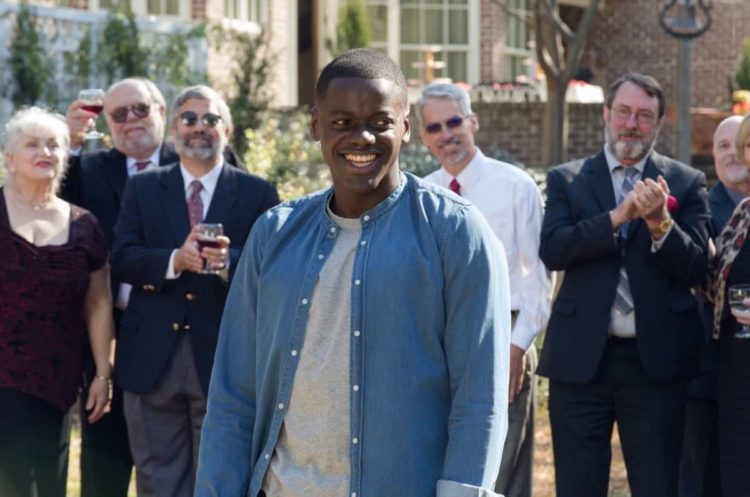 Daniel Kaluuya's character is the center of attention at a party filled with pasty white friends of his girlfriend's parents. Credit: rottentomatoes.com

The brainchild of Jordan Peele (best known as the shorter half of the Peele and Key comedy duo), “Get Out” has been hanging on in theaters for weeks now. No wonder. It’s an eminently satisfying film, combining sharp social satire with a horror flick’s incremental sense of dread. 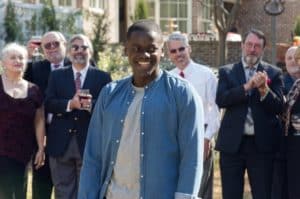 Daniel Kaluuya’s character is the center of attention at a party filled with pasty white friends of his girlfriend’s parents. Credit: rottentomatoes.com

Chris (Daniel Kaluuya) and Rose (Allison Williams) have been dating for several months and things have gotten serious enough to reach the Meet The Parents stage. He’s black. She’s white. It apparently matters not to either of them. Still, both are aware that, in America, the conversation about race is far from over (if it ever will be).

Well, Chris is certainly aware. When he asks if her parents know he’s black, Rose gives a perfect color-blind shrug: “No. Should they?”

“I just don’t want to get chased off with a shotgun,” he says, semi-facetiously.

Though they live in a lily-white suburban conclave, Dean (Bradley Whitford), Rose’s neurosurgeon dad, and Missy (Catherine Keener), her psychologist mom, are the very model of a modern liberal couple. Dad insists he would’ve voted for Obama a third time if he could’ve (Adding another level of knowing satire, Rose has even predicted to Chris that he would say just that). The ultimate Guilty White Guy, Dean even jokes about their just-like-family maid and groundskeeper (Betty Gabriel and Marcus Henderson):  “White family. Black Servants. I know. Total cliché.”

So what’s the scary part? That’s one of the things the picture does so well. We sense something’s not quite right (as does Chris) and we keep waiting for the other shoe to drop. And it does, but in an unexpected way. 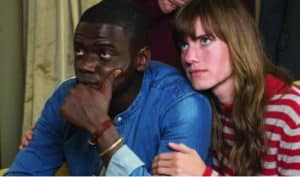 Daniel Kaluuya and Allison Williams star as a picture-perfect couple as the plot moves to the sinister reason he was invited to her parents’ estate. Credit: movienewz.com

“Get Out” evokes a plethora of horror-movie antecedents: “The Wicker Man,” “Rosemary’s Baby,” “The Stepford Wives, “ “White Zombie” (a Val Lewton classic from the ‘40s), even “Abbott and Costello Meet Frankenstein.”

Yet “Get Out” is also a total original. Not merely in the way it works out its shuddery second half, but also because of the picture’s omnipresent cultural observations about black/white relations – especially as perceived by smug limousine liberals.

Williams, whose motivations become more complex as the movie goes on, completely makes up for her “Peter Pan” debacle a few years back.  Her moment of total white-girl relaxation – snacking on Fruit Loops, with a glass of milk at her side and the “Dirty Dancing” soundtrack on her iPod – is classic.  And comedian Lil Rel Howery as Chris’ TSA-agent best friend – he’s the only one to fear something’s rotten upstate – brings a fine low-comedy energy to his role.

Still, Kaluuya, another of those amazing British chameleons (You saw him in “Sicario”), holds it all together. His reactions set the tone for our reactions and his every choice is spot on.

“Get Out” insists, with a knowing eye and a malicious grin, that everything wasn’t solved when we voted in our first African-America president. In fact, it suggests, things may have gotten worse.

Previous Article
Fiery bridge collapse spotlights three plagues: Homelessness, drug abuse, immobility
Next Article
Want to run the country like a business? Your CEO is behind the curtain