Getting around without a car: Transportation funding proposals promote transit, walking, biking

Bicycling, walking and transit are getting more attention as metro Atlanta planners prepare to adopt the proposed update of the region’s short- and long-term transportation plans. The plans are to be approved within 30 days. 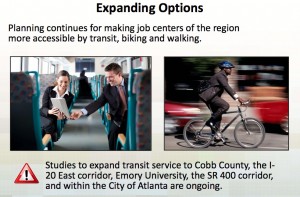 “We will see this discussion grow more robust: How can we ensure a transit network and pedestrian network that improves moving people to regional job centers,” the ARC’s David Haynes said at Wednesday’s GRTA board meeting.

Transit is slated to receive a significant portion of the region’s transportation funds over the next five years. Of note, transit is in line for almost as much as the construction fund for managed lanes – which are Gov. Nathan Deal’s preferred method for adding capacity to highways in and around Atlanta.

The category of transit operations and maintenance is to receive 16 percent of overall spending – $1.13 billion of the anticipated $7.05 billion appropriation, according to Haynes’ presentation. Managed lanes are to receive $1.24 billion, or 17.6 percent of the proposed spending.

This is not to say that the region’s historic focus on enabling single-passenger trips is going by the wayside. Far from it.

Nearly $4 billion of the $7.05 billion spending plan is clearly marked for road projects. About $2.4 billion is slotted to address roadway capacity and interchanges. Another $1.5 billion is slated for road optimization and safety. 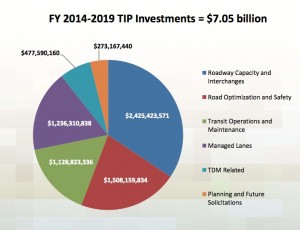 But there’s no denying that MARTA trains will run more frequently if this spending plan is approved and operating funds flow to the region’s largest transit system. And that transportation planners are working with PEDS to create safe havens for pedestrians as they walk to and from transit stops.

The spending is proposed in the region’s five-year Transportation Improvement Program. This plan is the short-term view contained in the 2040 Regional Transportation Plan.

The ARC board is slated to approve both plans on March 26. The GRTA board is to approve the plans on April 9. At that point, the plans will be used to allocate federal funds and other resources to improve transportation and mobility in the region.

Haynes anticipates metro residents will begin to expect more options to walk, cycle and ride transit as part of their travel to work and other necessary destinations. This demand could well be driven by the success of the region’s recreational paths for walking and cycling. 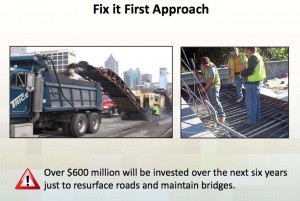 “We have a good foundation of a recreational system, but we need to start knitting the network together and making it attractive to get to job functions,” Haynes said.

“Recreation is an admirable goal, but we need to get to the next objective and make sure it [alternative modes of transit] is playing a bigger role in transportation than it does now,” Haynes said.

Haynes brought up biking, walking and transit during a portion of his presentation on the topic of, “Strategically expand the system.” This topic is actually one of the three pillars that transit planners have created in response to Gov. Nathan Deal’s vision for a statewide transit system that moves both people and goods.

The other two other pillars are, “Optimize/Manage existing assets,” and “Planning and execution improvements.”

Incidentally, Deal has provided critically needed state funding that has kept GRTA’s Xpress buses on the road since the great recession.

Deal stepped in to fill the gaps that resulted from metro Atlanta’s counties inability to pay for the service as their own revenues declined. Federal funding fell, as well. Deal went so far in the budget that begins July 1 to include Xpress funding in the state budget in a way that will make it difficult to remove in the future.