Glimmer of hope emerges from foreclosure meeting: Community hasn’t surrendered to the challenge

Three central messages about the foreclosure crisis in metro Atlanta emerged from a recent gathering of policy makers and community advocates. 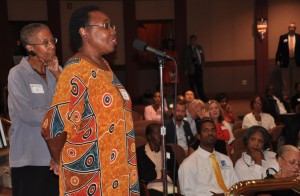 First, jobs are needed to enable homeowners to have the resources to stabilize their mortgages. Second, government services shouldn’t be taken for granted for the foreseeable future, because cities and counties have to cut budgets to offset the loss of property taxes collected on falling property values.

The third message was unspoken, but evident among those who attended the third annual meeting of Piece by Piece: A Regional Foreclosure Initiative. The message is this: The community still has the energy to combat an intractable problem.

As the foreclosure crisis has become a chronic condition, local elected officials have become more stoic in describing how their governments are responding. The foreclosures drive down property values, which results in fewer property taxes to provide government services. 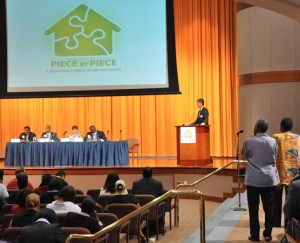 Two people wait to pose questions to the panel of county commissioners at the Piece by Piece meeting. Credit: Donita Pendered

One notable shift from last year’s meeting was in the responses from four chairmen of county commissions, who participated in a panel discussion and then answered questions.

Their conversation was less about how the counties are managing through a storm, and more about how they are trying to survive a series of whitewater rapids. Gwinnett County Commission Chairman Charlotte Nash used such an analogy to describe her outlook.

“In Gwinnett, we are trying to mend the raft enough to keep afloat while crossing a raging river, with enough of our things intact to sustain a recovery,” Nash said.

“The raft loses pieces on a daily basis because of the stress,” Nash said. “But we have to keep core services, and we have to have a workable organization when we come out on the other end of the economic recovery. Services include code enforcement that comes with property maintenance, includes fire, includes courts, and you’re probably going to see additional escalation of battles over revenue between cities and counties because the [revenue] pot is shrinking.”

Some in the audience brought questions about whether local governments are doing all they can to help in the foreclosure crisis. 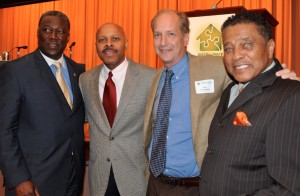 Harriett Maclin asked the panel how many jobs their governments had created with federal funds each has received, money that comes with requirements that the money be used to create local jobs. Maclin is a former vice president of the Atlanta Neighborhood Development Partnership, Inc. and serves on a number of boards, including the BeltLine Tax Allocation District Advisory Board.

Others in the audience brought questions about their own back yards.

Denise Walker, of southwest Atlanta, asked about the applicability of certain programs and grants to ensure the blighted neighborhoods around Fort McPherson can benefit from the planned conversion of the shuttered fort into a civilian community.

Questions are rising about the future of Fort McPherson’s redevelopment as the impact of the recession lingers. The development plan adopted by the state authority overseeing the project appears to be in line for revisions, due largely to the lack of response among private-sector investors to bankroll the creation of a bio-life research center. 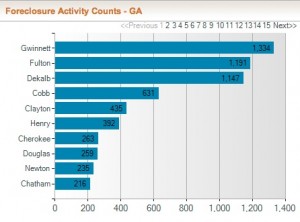 Metro Atlanta is the only region in the nation where the rate of foreclosures increased in the first half of 2012. This chart shows the raw numbers. Credit: RealtyTrak, Inc.

Maurice Jones, the keynote speaker at the annual meeting, encouraged Walker and others in the audience to use every resource they could find to improve their community’s situation. Jones is the deputy secretary of the U.S. Department of Housing and Urban Development.

Jones said he is hopeful the foreclosure crisis will be resolved, in part because of the efforts of grassroots organizations such as Piece by Piece.

“We are fighting back,” Jones said. “The strong partnerships you formed by Piece by Piece are model for the rest of the country. You can rest assured that I will be talking about you. It is an impressive collection of folks working together as a team.”