After months of contemplating her next move and exploring her options, Denise Cleveland-Leggett decided to join Atlanta-based Integral Group to continue to push the envelope in the revitalization of urban America.

Cleveland-Leggett, who until earlier this year served as the Southeast regional administrator for the U.S. Department of Housing and Urban Development (HUD), has now joined Integral as a senior vice president where she will help the firm grow and expand regionally and nationally.

The move is part of several leadership moves at the company founded by Egbert Perry, who will focus his efforts on new product lines and new markets. The firm recently announced that Vicki Lundy Wilbon, a patner, was promoted to Integral’s president of real estate.

While she was at HUD, Cleveland-Leggett managed more than 840 employees in a region that included Alabama, Florida, Georgia, Kentucky, Mississippi, North Carolina, South Carolina, Tennessee, Puerto Rico, and the U.S. Virgin Islands. She oversaw an annual budget of more than $519 million, multifamily and public housing funding of $5.3 billion, and single-family housing insurance of more than $236 billion. 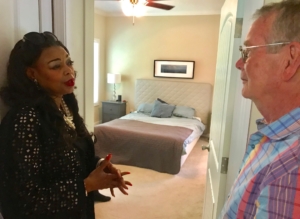 After leaving HUD, Cleveland-Leggett, a trained attorney, was approached by law firms, banks and developers, which she described as flattering.

“What set Integral apart, not only are they excellent in putting together housing and commercial developments, but they bring people along with them,” Cleveland-Leggett said of the firm’s ground-breaking work in the mid-1990s to redevelop public housing areas into mixed-income communities beginning with redeveloping Techwood Homes into Centennial Place just before Atlanta hosted the 1996 Summer Olympic Games.

Cleveland-Leggett was working in Atlanta in the 1990s when she got to know fellow attorney Renee Glover, who later became the transformative CEO of the Atlanta Housing Authority around the time Perry launched Integral and developed Centennial Place.

Born in Savannah and growing up in Atlanta, Cleveland-Leggett’s family moved to Ohio. She attended Oakwood College in Alabama and then Boston University’s School of Law before returning to Atlanta to practice law.

While at HUD, Cleveland-Leggett worked to settle the legal conflicts that existed between the City of Atlanta’s housing authority and Integral, issues that are still unresolved.

When asked about that relationship, Cleveland-Leggett spoke in broad strokes. 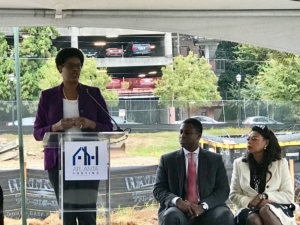 “I love this city, and I believe in this city,” she said. “I think the desire is there. Through strong leadership at the housing authority and through strong partnerships, I believe Atlanta will get there.”

One of Cleveland-Leggett’s favorite poems is Emily Dickinson’s “I dwell in possibility,” which has a housing metaphor.

“I’m attracted to fearless leaders – people who are not afraid to do something that’s different,” she said. “That’s what I tried to do during my tenure at HUD. I look for solutions. You have to be open to new ideas. Now I have the opportunity bring that leadership to Integral.”

Cleveland-Leggett said she’s been preparing her entire career for her journey at Integral, which currently has developments in 18 cities.

“I want to help Integral grow,” she said. “I believe they are part of the solution of what we need, not just in Atlanta but throughout the country. I’m working very closely with Vicki to expand opportunities.”

“Denise has a reputation for bringing innovative and successful resolutions to transactions and regulatory matters, property assets, and funding challenges,” Wilbon said. “I, and the rest of our leadership, look forward to her bringing that same level of creativity and effectiveness to Integral.”

Cleveland-Leggett said the only way to solve the nation’s housing problems is to have the public and private sectors work collectively on a goal of affordability.

“It’s so important we do whatever we can to solve solve the problem,” she said. “Every city that I’ve gone to, there’s an outcry for workforce housing. People who work in our cities can’t afford to live in them.” 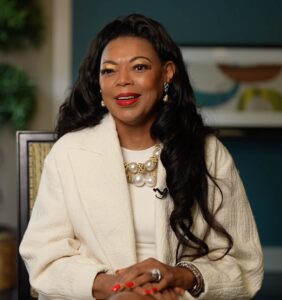 Cleveland-Leggett remembered seeing a homeless man outside of HUD’s Atlanta offices wondering about the cracks in society.

“You look in the eyes of people, and they have no hope,” she said. “If you don’t get to the root of why they are homeless, it won’t solve the problem. How do we provide wrap-around services to make sure people get out of a cyclical situation? A home gives people an opportunity to change the trajectory of their lives.”

Perry, Integral’s chairman and CEO, said he was delighted Cleveland-Leggett had decided to join Integral.

“Denise is broadly respected in the business community and her relationships will be invaluable to our commercial real estate, community development, and asset/investment management teams,” Perry said in a statement “As we are diversifying the company’s products and its geographical footprint, including our international ventures, Denise brings additional critical capacity to the team.”

Cleveland-Leggett is married to Dr. Christopher J.W.B. Leggett, a cardiologist; and they have two children –Alexandria and Christopher II.

From her standpoint, Cleveland-Leggett said all approaches will be needed to improve housing affordability across the country, from land trusts and land bank authorities to public-private partnerships.