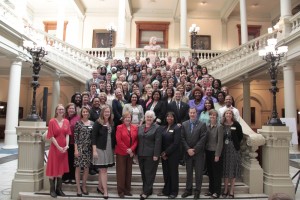 Atlanta’s recognition was especially poignant. The district accepted a Golden Radish Award for trying to improve the quality of food served to pupils, even as court testimony continued a few blocks away in the trial over the cheating scandal.

The award also is significant because a number of Atlanta schools are located in areas where students may not get much fresh food at home, because not all neighborhoods have grocery stores that supply fresh foods. The shortage of fresh foods has been linked to various health issues.

“Poor nutrition can cause health problems, overweight and obesity,” said Georgia Public Health Commissioner Brenda Fitzgerald “Half or more of your plate should be fruits and vegetables, and farm to school programs have been shown to increase student consumption of these foods. The Georgia Department of Public Health has been a long-time partner and supporter of Georgia’s farm to school efforts and we’re pleased to see the movement’s leaders recognized today.”

According to Georgia Organics, the Golden Radish Award recognizes districts for farm-to-school efforts that include:

Volunteers and Atlanta school officials have been working for several years to increase the amount of fresh foods served to students. In 2010, the district’s Farm to School Task Force presented a report that included a number of recommendations.

Atlanta’s former director of sustainability, Mandy Mahoney, was among the presenters.

Mahoney chairs the board of Georgia Organics and now serves as president of Southeast Energy Efficiency Alliance. Her interest in the farm-to-table food movement includes making cheese from local, raw milk.

“We are so proud of the school district leaders being recognized through the Golden Radish Award,” Mahoney said in a statement. “In reviewing the applications, it’s clear that farm to school programs are popping up all over Georgia, and that Georgia school districts are committed to continuing to grow and support thriving programs.”

According to APS, the district was recognized for the following initiatives:

Atlanta was recognized at the gold level of the Golden Radish Award. Here are the other local winners:

None in metro Atlanta

School districts across the state participate in farm-to-school food programs. An interactive map on Georgia Organic’s website indicates that the greatest participation is in the urbanized northern part of the state.

The greatest concentration is in metro Atlanta, stretching east to Athens.

Other participants in north Georgia include Union County High School, in Blairsville; Northwest Whitfield High School, in Tunnel Hill; and Georgia School for the Deaf, in Cave Spring – which is in the process of starting a garden that will provide produce for student meals.

Previous Article
Judge says ruling on Fort Mac and Tyler Perry cases is premature; Ubiquitous CEO is ‘ecstatic’
Next Article
Georgia’s beauty all around us — a trip to Cave Spring