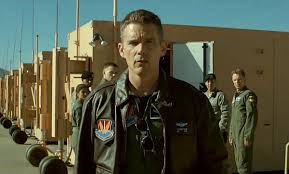 The new movie “Good Kill” takes its title from what drone pilots — stationed in sterile trailers 7,000 miles away from the Middle East — say when they demolish a target (i.e., people).

They also say “Splash,” but that title was already taken (Millennials, please look up Tom Hanks on IMDB).

Hunkered down in their air-conditioned bunkers, these joystick killers experience war as the ultimate video game. That’s beginning to bother Air Force pilot Tom Egan (Ethan Hawke) who longs for the good old days when he flew F-16s. The days, when, as someone says, “You had to go to the country to make war on the country.”

But then, Egan and his team aren’t exactly working in their country, either. Note the sign on the outside of the bunker’s door: “You are now leaving the U.S. of A.”

In other words, what goes on near Vegas, stays near Vegas. And yes, Sin City is the closest metropolis. Nobody lives in town, though. Their homes are sad little facsimiles of suburbia —artificial patches of green with barbecue pits and swimming pools, a man-made mecca in the midst of the barren Nevada flats. 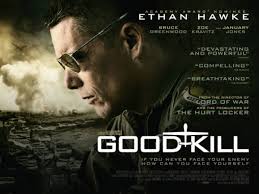 Egan’s boss, Lt. Col Johns (Bruce Greenwood), tries to keep things on a human scale, reminding his men (and occasional woman; this is the modern army) that those aren’t just pixels they’re blowing up. “It’s flesh and f*** blood,” is how he puts it.

Collateral damage, of course, is a given.

Things go from bad to worse when the drone pilots are assigned a new overlord, the CIA. The gang in Langley are much more comfortable in their roles as armchair warriors. Therefore, they are much more likely to order a strike — full speed ahead and damn the consequences.

So does Egan’s alcohol consumption.

Writer/director Andrew Niccol explores every aspect of his set-up — from the pros and cons of the war itself to the numbing effect long-distance death-dealing can have.

As Egan falls apart, so does his marriage. January Jones, playing an updated version of her “Mad Men” housewife, can’t understand why her husband doesn’t just move on.

Where else in the military can someone wipe out a building (and whomever is inside) in Afghanistan, then come home to dinner with the family?

The script is wonderfully literate whether aping military-ese  (“You could use a little I & I, intoxication and intercourse”), making grim jokes or waxing philosophical (“Don’t ask me if it’s a just war; it’s just war.”).  Niccol is especially drawn to the euphemisms of killing. “Permission to prosecute,” for instance, is CIA-speak for let’s kill some folks.

Or is it, let’s kill some bad guys?  The movie is probably liberal in its heart, but much like Francis Ford Coppola’s screenplay for “Patton,” “Good Kill” makes a case for both sides.  When Egan’s copilot  (Zoe Kravitz) expresses some reservations about what they do, a colleague demands if she prefers the way women are treated in the Middle East…and he has a point.

Hawke anchors the film with his anguished portrayal of a man who, as he loses his moral compass, loses everything. He hasn’t just been grounded; he’s been buried.

If Hawke is “Good Kill’s” emotional core, Greenwood is its conscience, the man who sees all sides and still is bound by duty. He’s also the resident jester, getting the majority of the good lines.

And what a plethora of good lines there are. The movie can be accused of being dialogue heavy; after all, it mostly travels between the bunker and Egan’s small-ish house, with the occasional trip into Vegas for the aforementioned “I & I.” But Niccol’s literate script easily carries the film over its more cramped aspects.

And cramped is the operative word. At times, the airless sterility of the bunkers calls to mind scenes from “2001.” But make no mistake. “Good Kill” isn’t science fiction or even a dire warning about what drone warfare could be like.