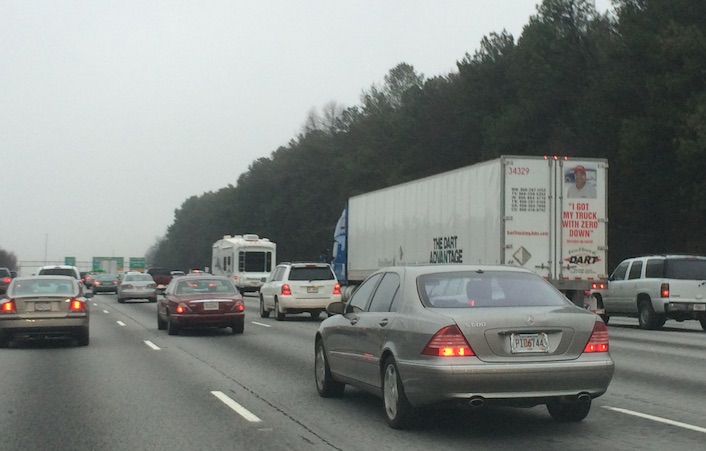 An uptick in the sale of new vehicles that’s been linked to lower gas prices spells more trouble for state road funding. 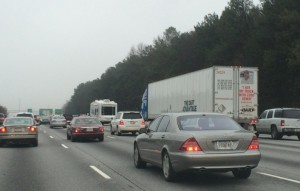 Georgia’s collection of motor fuel taxes fell by 2 percent in the last three months of 2014. Revenues from tag, title, and fees rose by 2.7 percent during that period, according to a tabulation of monthly reports from the Georgia Department of Revenue.

If the trend continues, an ever-increasing number of new, fuel efficient vehicles will be on the road sooner rather than later. While that’s good news for the auto industry, it’s bad news for the primary source of state revenues Georgia uses to build and maintain roads – a fuel tax collected on every gallon sold.

These figures and others will factor into this year’s debate in the Legislature over state transportation funding. Both Gov. Nathan Deal and a joint House-Senate study committee call for Georgia to raise more money for roads and transit.

The exact method for collecting that money is to be determined. The amount being discussed is staggering: At least $1 billion a year. To put that sum in perspective, it’s almost a fifth of Georgia’s entire budget for the fiscal year ending June 30 – $20.8 billion.

State revenue figures support the observations of auto dealers in the southeast in the fourth quarter of 2014. 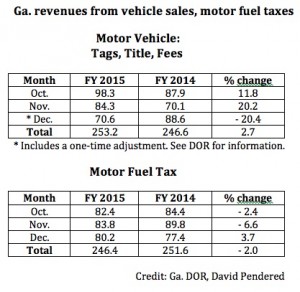 Dealers told the Federal Reserve that consumers jumped to buy big vehicles when fuel prices began a downward slide in late summer. Dealers began reporting a persistent uptick in sales in September, and by year’s end it had turned into a full-fledged boomlet.

The Fed included the following characterization of dealers’ comments in its description of economic conditions in the southeast, as reported in the Jan. 14 edition of the Beige Book from the Atlanta District:

These new vehicles will burn less fuel than almost anything they replace, according to federal estimates of minimum standards for fuel economy.

This will be especially true in the case of consumers who delayed a vehicle purchase as long as possible in the wake of the great recession.

These estimates are based market forecasts of the fleets manufactured in the U.S., according to a final ruling released by the federal Department of Transportation and Environmental Protection Agency.

Consider the Jeep Grand Cherokee, which autotrader.com says is in the Top 10 of most popular vehicles. Reported mpg estimates for the 2005 model were 17 city, 22 highway. The 2014 model had reported mileage estimates of 22 city, 30 highway.

Georgia no longer can rely on the federal government to pay for most of the state’s roads, bridges and other infrastructure. The days of the federal match have been waning for years, as Congress has been unable to compromise on a way to pay for transportation projects. The current federal transportation funding measure expires May 31.

Georgia is facing a $367.2 million shortfall in necessary federal transportation funds in the federal fiscal year that ends Oct. 1, the state’s chief engineer told GRTA’s board of directors at its Jan. 14 meeting.