Gov. Nathan Deal’s task force to reform transit governance seems to be serious about getting something done.

The panel met in public for the first time Tuesday. One bi-partisan message that emerged clearly is that the committee intends to comply with Deal’s order that legislation establishing an entity to oversee regional transit in metro Atlanta be presented to the state Legislature in January.

Another clear message also emerged, this one delivered to transit operators – tell us what you want now; don’t wait until after we’ve written a bill and then tell us how to tweak it to suit.

“We are very serious about having a bill ready to go in January,” said Rep. Edward Lindsey (R-Atlanta). “I don’t want to hear from [an organization] that you didn’t think about this, or think about that. I’d rather hear from you upfront.”

“It would be helpful to know what your utopia would be,” Sen. Ronald Ramsey (D-South DeKalb/Rockdale) told another transit provided. “We ask that you get that to us as quickly as possible.”

Lindsey pressed hard on the proposition that GRTA assume the role of chief transit provider. Deal’s executive order, which formed the committee, ordered the committee to designate “a state agency or authority with the responsibilities of oversight and coordination of transit services in the metro Atlanta region.” 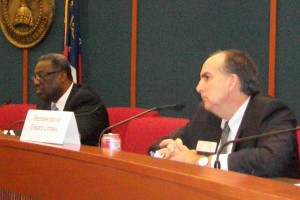 Earlier in the meeting, a panel of transit managers from Cobb and Gwinnett counties, and Douglasville, fielded questions that ended with Lindsey asking them about the idea of GRTA becoming the region’s transit administrator.

All generally agreed that GRTA could perform that task. Each also said the regional agency had to be structured in such a way that local officials were able to shape service to suit their hometown constituents.

“There’s no ‘One Size Fits All’ approach,” said Randy Hulsey, of the Douglasville Van Pool. “When you look at the governance process, and how funding priorities come about, look at the big-ticket items and the smaller pieces, too.”

MARTA General Manager Beverly Scott was the first to address the committee. Scott’s comments framed the conversation by providing virtual bullet points that resonated throughout the conversation that lasted just over four hours.