Georgia created the Innovation in Teaching Competition as part of the state’s implementation of President Obama’s Race to the Top initiative, which is to provide $400 million to Georgia through the American Recovery and Reinvestment Act of 2009.

This fourth round of awards was slated to be announced in spring 2014, according to a state website. Teachers from metro Atlanta school districts dominate the overall winners list.

The contest intends to recognize innovative teaching strategies for Georgia standards in English and language arts, and math. There’s also a cash award of $2,000 to each winning teachers and a $5,000 grant to the teacher’s school district that’s to be used to implement Georgia’s instructional standards, according to a statement released Friday by the governor’s office. 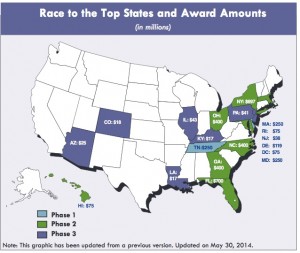 In a practical side of the competition, other educators will have the opportunity to see the award winners in action in the classroom. Georgia Public Broadcasting films the winners and the edited videos will be available at georgiastandards.org and through iTunesU, according to the statement.

As a candidate for governor in 2010, Deal said he would not accept funding from Race to the Top. A report by ajc.com quotes Deal as saying at the time:

Three weeks later, Georgia won a $400 million grant from Race to the Top. Deal determined at that time that he would accept the money, which resulted a grant initiated under by then Gov. Sonny Perdue’s administration, according to ajc.com

Along with funding this teaching competition, Race to the Top has enabled Georgia to create two “non-traditional schools” that intend to address high school students who are at risk of dropping out of school. The report released by the White House, in March, doesn’t elaborate on the program.

The White House report portrays Race to the Top as a successful successor of President George W. Bush’s educational initiative, No Child Left Behind.