Gov. Deal urges prayers for rain as he restricts water use in drought-ridden NW Georgia 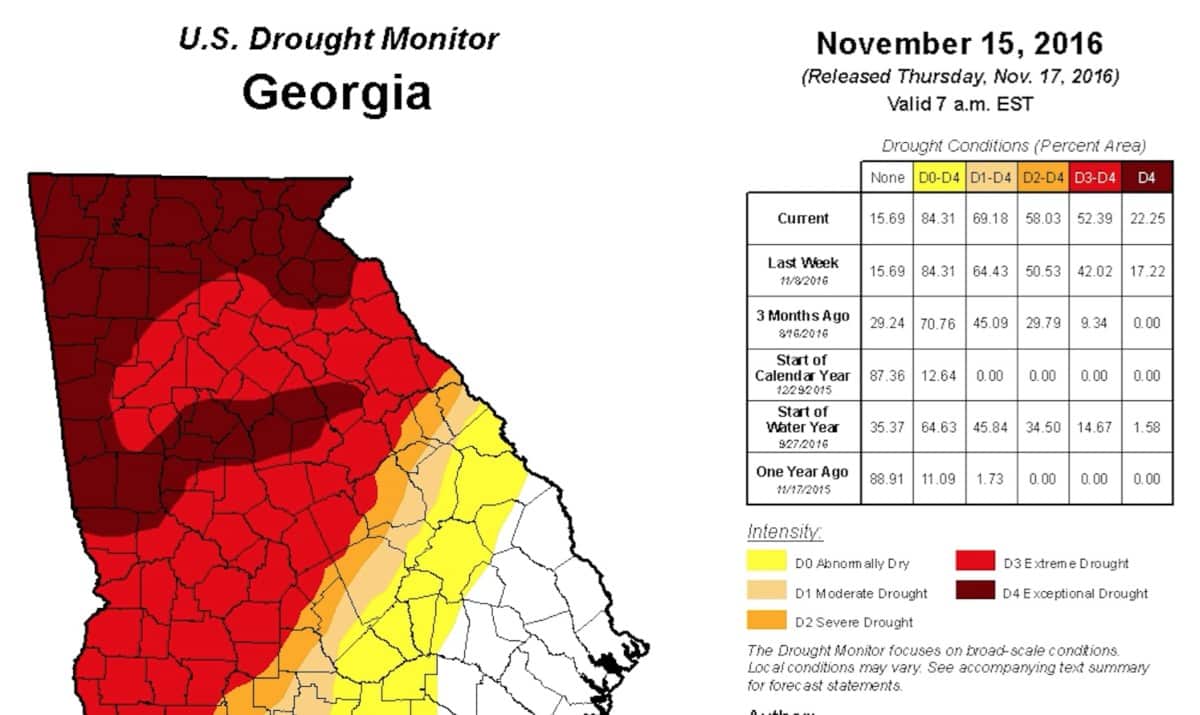 Gov. Nathan Deal on Thursday urged Georgians to pray for rain as he restricted outdoor use of water across most of northwest Georgia, while active forest fires blaze across 27,027 acres in Georgia’s mountains. 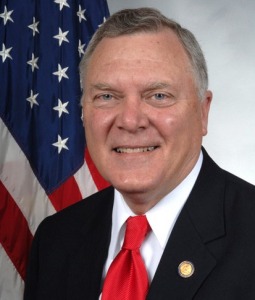 “We urge these communities to act accordingly, use good judgment and avoid outdoor burning and watering while we continue to work with the [Georgia Environmental Protection Division] and pray for rain across the state,” Deal said in a statement.

Deal was referring to communities located in the 52 counties where on Thursday he declared a Level 2 Drought Response. The area covers all of metro Atlanta. It stretches along the Alabama border south to Columbus, east to Athens and across all but two counties in north Georgia. The exceptions are Towns and Rabun counties.

Evidently, Deal and EPD acted on a long-range weather forecast issued Thursday by the National Weather Service’s Climate Prediction Center. The forecast calls for a dry winter with above normal temperatures.

“Today’s declaration is driven by an extended period of little or no rain and increasing dryness in the impacted areas,” said Richard Dunn, director of the Georgia Environmental Protection Division. “What’s more, there is little hope for relief as weather forecasters expect an unusually warm, dry winter across most of the state.” 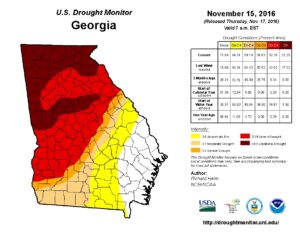 A drought report issued Tuesday shows the extent of the areas affected by drought in Georgia. Credit: National Weather Service

Exceptional drought conditions now cover 22.25 percent of Georgia, all of it in northwest Georgia and up to the outskirts of metro Atlanta. Three months ago, no extreme drought condition existed in the state.

Deal’s statement said this week marks the 24th week of continuous severe drought in northwest Georgia, the 22nd week for the metro Atlanta area, the 21st week in northeastern parts of the state and the 15th week in central Georgia. 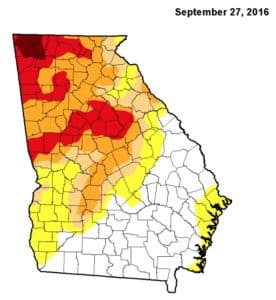 Drought conditions were not as pervasive on Sept. 27 as they are now. File/Credit: National Drought Mitigation Center

The ban does not apply to personal food gardens, newly planted plants, hand-watered plants, and private wells, according to EPD.

“I would like to remind Georgians that there are specific guidelines and prohibitions to follow during a Level 1 and Level 2 Drought Response,” Deal said.

The Level 1 Drought Response covers an additional 58 counties. It spans from the Level 1 region southeast to Augusta and diagonally across the state southwest through Albany to the Florida border. 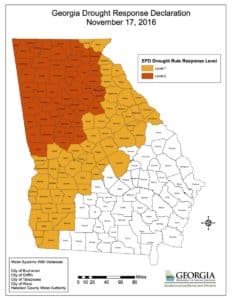 During a drought in 2007, then Gov. Sonny Perdue convened a prayer vigil on the grounds of the state Capitol to ask for rain.

“We’ve come together here simply for one reason and one reason only: To very reverently and respectfully pray up a storm,” Perdue said after a choir provided a hymn, according to a report by nbcnews.com. “It’s time to appeal to Him who can and will make a difference.”