Gov. Nathan Deal announced Thursday, on the first day of his trade mission to Asia, that a leading Chinese phosphates producer will open its U.S. headquarters and a manufacturing plant in Effingham County.

Gov. Nathan Deal is leading a trade mission to China and Japan.

“This trip marks a number of milestones for Georgia and emphasizes the state’s commitment to continuing to build on these key relationships,” Deal said in a statement released Aug. 16, in advance of his departure Monday.

The future Chinese-owned facility in Effingham is to employ 50 workers and become the county’s fifth foreign-owned plant. The Xingfa Group has strategic relations with familiar names including Proctor and Gamble and Chemical, and intends to ship through the nearby Savannah port, according to another statement by the governor’s office.

“We are grateful to Georgia and Effingham County for supporting our company, and are confident that the wide array of resources they offer will contribute significantly to Xingfa’s continuing success,” Guozhang Li, chairman and chief executive officer of Xingfa Group, said in the statement.

Details of the resources provided were not provided in the statement.

Effingham County’s four existing companies are all European – two Portuguese, one French and one German – and involved in manufacturing electronics, transformers or cement, or the sale of metal items, according to the county’s profile maintained by the Georgia Department of Economic Development. 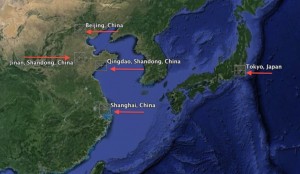 Deal’s current itinerary focuses on three areas in the northeast region of China, generally between Beijing and Shanghai.

In Shanghai, Deal intends to raise awareness of Georgia’s tourist attractions. To that end, the delegation include Frank Poe, executive director of the Georgia World Congress Center; William Pate, president and CEO of the Atlanta Convestion and Visitors Bureau; Joe Marinelli, president of Visit Savannah; and a delegation of senior representatives of the Georgia Aquarium and InterContinental Hotels Group.

While in China, Deal’s group is to connect with a separate trade mission led by Georgia’s Department of Economic Development.

The smaller group intends to meet with potential importers and distributors. Representatives include officials with Bell Plantation, a peanut products company; Lamar Pecan; JRJ Brokerage Co., a food broker; and American 3B Scientific, which produces artificial skeletons, organ models and other items used in medical education.

On the way home, the trade mission is slated to stop in Tokyo, where the group will join in celebrating the 40th anniversary of Georgia’s oldest economic development office.

“It’s an honor to lead this delegation, both to showcase what Georgia has to offer to an emerging market and to celebrate all Georgia has accomplished with a lasting partnership in another,” Deal said in a statement.

Deal conducted his first trade mission to Asian in October 2011, visiting China and Korea to seek bi-lateral opportunities for trade and investment. Six months later, Reed led a delegation of comprised of more than 20 Atlanta companies that included the signing of a memorandum of understanding with the Hangzhou Chamber of Commerce, which represents one of China’s leading commercial cities.

Atlanta’s COO, Duriya Farooqui joined the governor on the current trip, along with a host of other representatives including:

Companies slated to be represented include:

Previous Article
A Republican-Democratic tag team, on the road for immigration reform
Next Article
WXIA previews its documentary ’50 Years of Change: Share the Journey’