Grassroots soccer at the intersection of transit, equity, social infrastructure 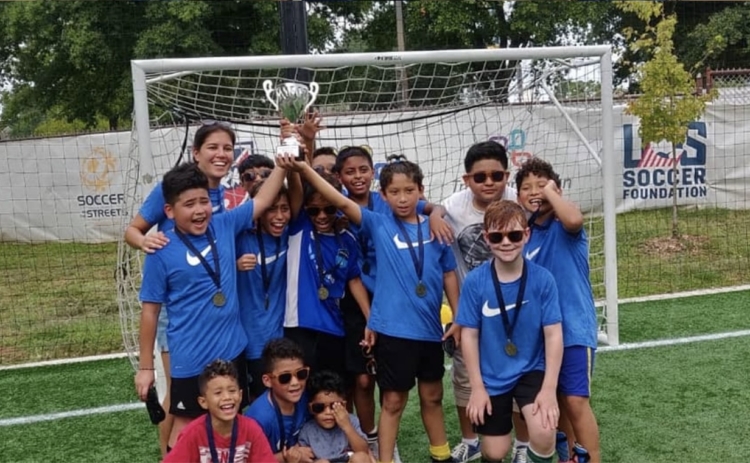 By Guest Columnist SANJAY PATEL, director of special projects at Soccer in the Streets

It’s Saturday morning in late August and a soccer team from the Garden Hills neighborhood is aboard a MARTA train heading southbound. As the youngsters approach their destination, the recorded announcement on the speaker system exclaims, “Welcome to West End Station, exit here for StationSoccer….” 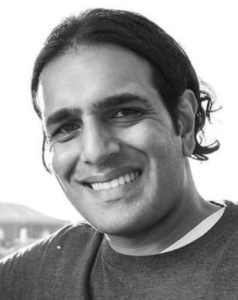 That day, teams from Soccer in the Streets programs across the city, and additional teams from as far as Chattanooga, had travelled to MARTA’s West End Station to play in an invitational tournament. Players represented many different nationalities, albeit most of these kids had a common trait – their love of the beautiful game.

Garden Hills took the U10 trophy home with them that day! Personally, this was a momentous win: We were building social capital.

Five years ago, people were calling me ​crazy​ for broaching the idea of building soccer fields at train stations. ​But I was certain we could do it. Soccer in the Streets​ has been working in the sport for development realm for 30 years this year — its roots go back to 1989. With soccer at its core the organization has been teaching life skills on and off the field in Atlanta’s low-income communities, of which many youth face the two most common hurdles affecting after school programs — affordability and transportation.

These twin issues were highlighted in a recent ​ESPN article​ based off an Aspen Institute report. Soccer in the Streets’ free programs meant it could provide a solution to the affordability gap,. The ​StationSoccer project ​is its answer to the transport hurdle – it’s a community project that is being driven by collaborative cross-sector partnerships. 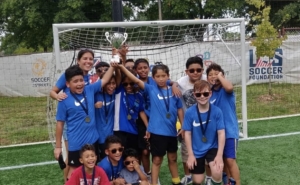 At MARTA’s Five Points Station, we converted an existing amphitheater area above the station into space for a pilot project that, in the end, became the first soccer field inside a train station in the world. Serving as a central location, we were able to showcase the need for access to soccer, especially given the lack of youth residing in the Downtown area. That project won numerous awards, including the 2017 Sport for Innovation and Technology Global Award from Beyond Sport.

At West End Station, we repurposed a space that had been fenced off since the late ’70’s in a residential area. As we entered our fall season, over 300 kids had registered for that program. In addition, at that location local businesses including Bank of America and ​the MET​ helped us introduce financial literacy classes to our youth, lending to our view of a future village model whereby local businesses and programs are able to plug in, providing access to the community.

We are working to expand offerings here to include a learning center and community gardens.
On Saturday, at a ​public event, w​e plan to open our third StationSoccer project at East Point. Two business owners and the City of East Point have come together to provide land on Main Street across from the MARTA station entrance. 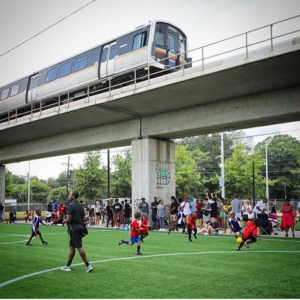 Children play and compete in a soccer league in a neighborhood where such an opportunity was in scarce supply before Soccer in the Streets, and its partners, developed space at MARTA’s West End Station. Credit: Dave Williamson

Atlanta United FC​ has changed the game with its presence in the city, both on and off the field. A typical game day provides a clear view of how the team has connected the city through soccer. Whether it’s the MARTA ride into downtown or the build up through to the atmosphere at Mercedes-Benz Stadium — it is a special connection point that is diverse and rich in social capital. We are fortunate they were early believers in the vision of StationSoccer and now, through their ​foundation​, Atlanta United is one of our founding partners.

MARTA is working towards a network of ​community hubs ​through its transit-oriented development program and we are working with them to help create some equitable parts of that effort through the project. We will also be working with MARTA to add transit enrichment to our off-the-field programs, which will involve excursions for youth to city attractions located along transit routes.

The City of Atlanta’s Department of City Planning, through the City’s Atlanta Design Studio, are keeping us focused on being more thoughtful about the spaces we are working in. Collectively, goals include working with communities to create safe spaces that essentially grow to become connected third spaces, whereby families can play, learn and grow. The Department of Planning showcases this type of work well in their ​City Design book​.

The TransFormation Alliance ​has played an important role in keeping us intentional about health and racial equity lenses, including hiring from within the communities we work in. This collaborative effort has yielded some early wins whereby we have been able to repurpose the built environment and through quality programs provide access to soccer and more. As we continue to grow and build the ​League of Stations,​ a planned network of 10 MARTA stations to be built over the next three years, we will look to bring on more partners and groups that are socially driven to align with connected community projects. 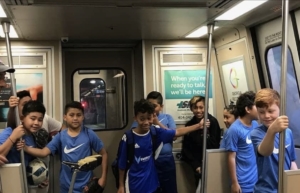 The Garden Hills soccer team takes MARTA to the StationSoccer match, to be played at MARTA’s West End Station. Credit: Soccer in the Streets

In a time when income inequality affects many communities in Atlanta and beyond, we feel this project could be replicated nationally as it is a good example of building social capital through intentional infrastructure and programmatic partnerships. In fact, Eric Klinenberg, renowned author of ​Palaces for the People​, is to be in town to discuss this very topic in a fireside chat with Planning Commissioner Tim Keane in an ​event hosted by Southface Institute, Soccer in the Streets and the City Design Studio on Monday, Oct. 7th.

As we look forward to the potential of hosting the ​World Cup here in 2026,​ and all the fanfare that we could bring to that, coming soon to a train station in Atlanta, consider the first official League of Stations match-up – West End United vs. East Point FC. Stay tuned, this train has left the station!

Notes to Readers:
Those interested in the StationSoccer project by Soccer in the Streets can send an email to Sanjay Patel.

Tickets to the Fireside Chat with Eric Klineberg and Tim Keane, on Oct. 7, are priced at $20 each. Information and registration is available on this page of Southface’s website. 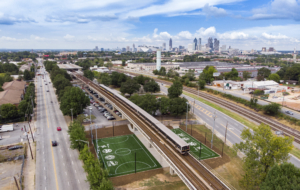 Saturday was a big day in East Point: ‘This site is going to change people’s lives’
David Pendered October 6, 2019 6:44 pm