The Greater Seattle area could write the textbook on how to pass (and how not to pass) a regional transportation sales tax.

The story actually goes back to the late 1960s when Seattle voters turned down a referendum to build a rail transit system with a 20 percent local match for 80 percent federal funds.

Their loss was Atlanta’s gain. In 1971, Atlanta voters in Fulton and DeKalb counties passed the MARTA Act, and the federal dollars flowed to the Atlanta region.

Speaker after speaker reminded 110 metro Atlanta leaders visiting Seattle on the 15th annual LINK trip that they should thank Seattle for their transit system.

“We have regretted that every since; and I do believe you benefitted from that,” said Aaron Reardon, chairman of Sound Transit — a three-county agency that operates commuter trains, light rail and express buses for the Greater Seattle region. Reardon also is the executive of Snohomish County — the most northern county in the Puget Sound region.

Sound Transit was established in 1996 when voters approved a regional transit plan for Puget Sound and to begin building a rail system.

By 2007, the decision was made to go back to voters to approve a new investment in transportation in the region. The referendum proposed splitting the tax revenues between road and transit projects. 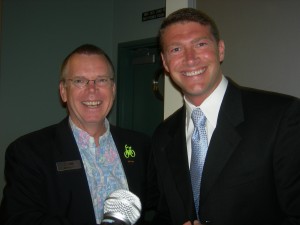 So they went back to the drawing boards, polling voters along the way. Voters wanted to vote for a regional transit system. Suburban and urban voters all wanted light rail, but leaders knew they couldn’t build out the whole system right away and it could take years if not decades for outlying areas to get rail.

The decision was made to serve those areas with express buses until they would be able to get rail transit. Leaders also divided the region into sub-areas, and they pledged that each sub-area would get a proportionate amount of the new tax revenues for transit.

Reardon said that polling showed that transit was much more appealing to voters even if they would rarely use it.

“We drive everywhere; we love to drive,” Reardon said. “But voters could identify with the Sound Transit plan. They knew it. It was something they could understand. They could see how it fit into their daily lives.”

Metro Atlanta leaders explained that they too soon would be voting on a regional transportation sales tax.

Reardon said it was critical to have a regional transit agency that could sell the plan and explain how it would be implemented.

Right now, metro Atlanta and the State of Georgia are trying to figure out a regional transit governance agency that would include a much greater area than just the two MARTA counties. 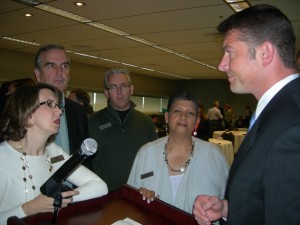 The timing of the 2008 Seattle referendum also was fortuitous because it was held on the same day as the general presidential election. That brought out many more transit-friendly voters to the polls, and the referendum passed by more than 60 percent.

Metro Atlanta leaders are becoming increasingly concerned about the timing of the regional sales tax vote — now slated for the primary election on July 31. Because it is expected that most of the contested races will be in Republican races, the likely voters would tend to be anti-tax, conservative and suburban.

There’s a growing consensus among those championing a new regional sales tax in the Atlanta region that the vote should be held in November during the general presidential election. That would attract a greater percentage of voters from throughout the metro area — including the core urban area that tends to be more accepting of transit and taxes.