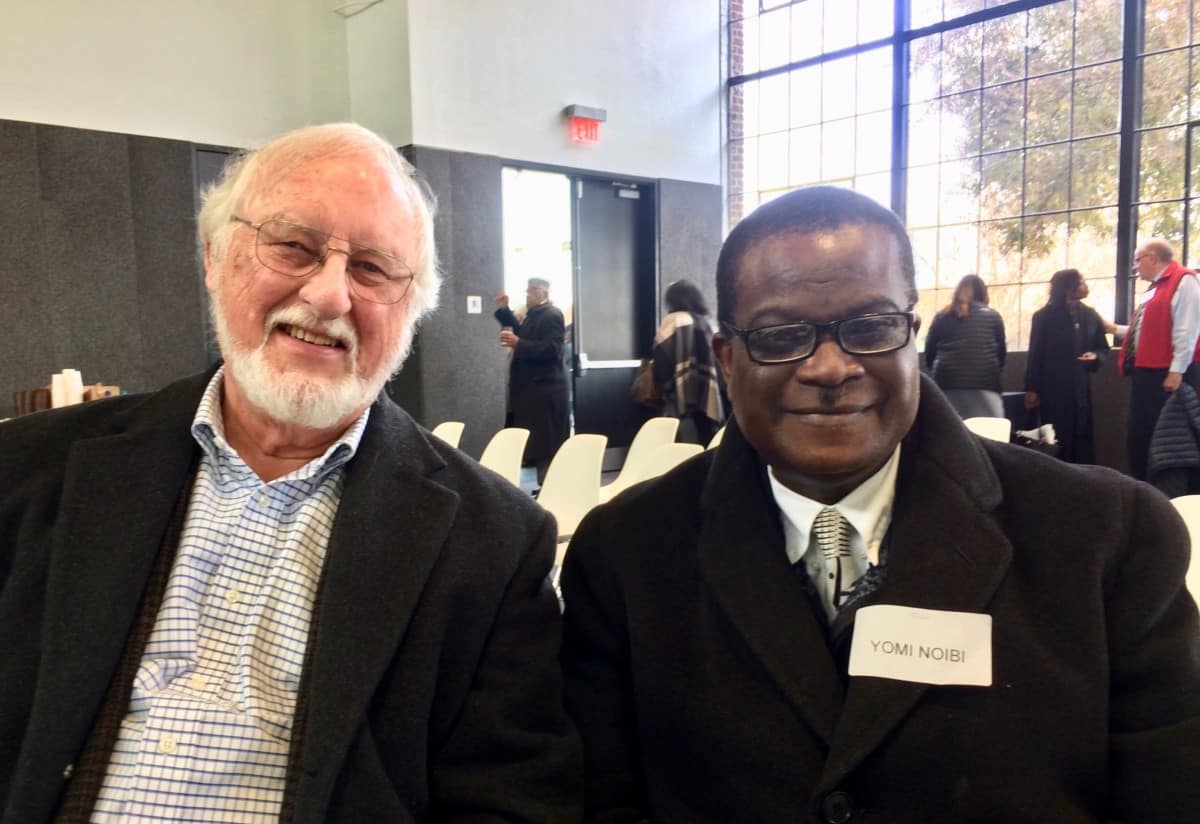 Westside Atlanta represents the rise and fall and the impending revival of a community.

“We were in the business of aspirations and dreams,” said Mary Schmidt Campbell, president of Spelman College, who was the keynote speaker at the Transform Westside Summit on Dec. 16. “They were the lynchpin during the Civil Rights period. The area around the Atlanta University Center was a community that went into decline.”

Today, there is tremendous energy to revive the communities on the Westside, and some of the most ground-breaking initiatives are coming out of the Atlanta University Center.

For the past two years, ECO-Action (Environmental Community Action) has been working with students from the colleges to develop “Green Infrastructure at Atlanta University Center.” The focus has been to help alleviate the flooding that has impacted the neighborhoods around the universities by capturing storm water. 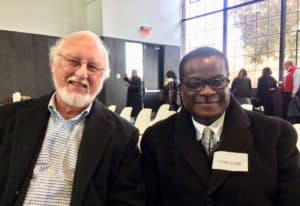 The Green Infrastructure plans also hopes to improve water quality along Proctor Creek, a watershed with headwaters around the Georgia Dome and the AU campuses which drains into the Chattahoochee River.

Dr. Yomi Noibi, executive director of ECO-Action, credited the two-year effort to a grant from the Environmental Protection Agency.

“It gave us and the AUC an opportunity for students plus staff to study nine conceptual areas,” Dr. Noibi said. “We conducted field investigations on site, studied the topography and researched available data. We figured out how we can save 40 million gallons of storm water within the AUC.”

The initiative extended the research and community engagement work that Park Pride had conducted in its Proctor-North Avenue (PNA) study that explored environmentally-friendly ways to alleviate flooding and sewage overflows in Vine City and English Avenue.

“The PNA only worked with low elevation areas that were flooding, and it didn’t work with higher elevation areas on the Atlanta University campus,” said Bill Eisenhauer, who has been working with Dr. Noibi on initiatives on the Westside. “We need all the flood control we can get.”

The AUC project involved as many as 350 students with 27 of them actively engaged in the nine conceptual plans to alleviate flooding. The group recently presented its findings, and now it is hoping the concepts will gain traction with the powers that be.

The nine conceptual plans presented in seven separate reports are summarized below. 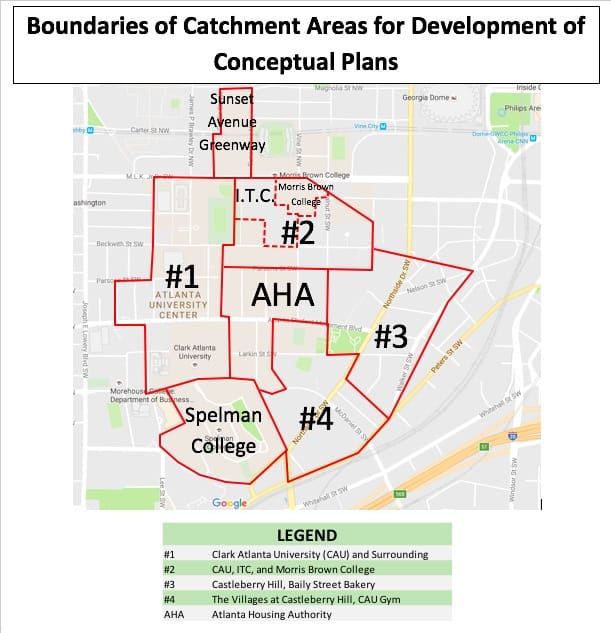 Sunset Avenue Greenway on the historic Morris Brown College Campus is identified in several of the Atlanta University Center (AUC) Conceptual Plans as a significant opportunity to detain, infiltrate and clean storm water from the AUC campuses before it impacts local neighborhoods.  Extending along Sunset Avenue north of Martin Luther King, Jr. Drive to Magnolia Street, the property is adjacent to Herndon Stadium on the Morris Brown Campus.  It can capture and detain 5 million gallons of storm water runoff during a major rain event.  It can also infiltrate 500,000 to 1.2 million gallons of runoff per year.  [It is the only Conceptual Plan for which resources were available to estimate greenway infiltration capacity.]

Catchment # 2 brings together three adjoining Conceptual Plans for the Interdenominational Theological Center, the high elevation portion of the historic Morris Brown campus, and contiguous parts of the CAU campus, as well as private and public/private areas uphill from the campuses.  It extends along the northern edge of the study area.  It captures 4.0 million gallons of floodwater, 2.3 million gallons in cisterns and 1.7 million gallons in greenways.

Catchment # 3 is central in the eastern side of the study area.  Some two-thirds of the Catchment is located outside of the boundaries of AUC, starting as high up in elevation as Walker Street in Castleberry Hill.  Rainwater from these portions of the Catchment drops 60 feet in elevation to flood the lower elevations at CAU and the Atlanta Housing Authority (AHA) at John Hope Drive and Lawshe Street.  Green infrastructure in this Conceptual Plan will capture 9.2 million gallons of floodwaters, 4.3 million gallons in cisterns and 4.9 million gallons in greenways.

Catchment # 4 takes in the southeastern portion of the study area.  As much as two-thirds of this Catchment is public/private apartment development starting at the high elevations of Peters Street down to and floods the parking lot behind the CAU Gym.  This Conceptual Plan captures 5.0 million gallons of floodwaters, 3.1 million gallons in cisterns and 1.9 million gallons in greenways. 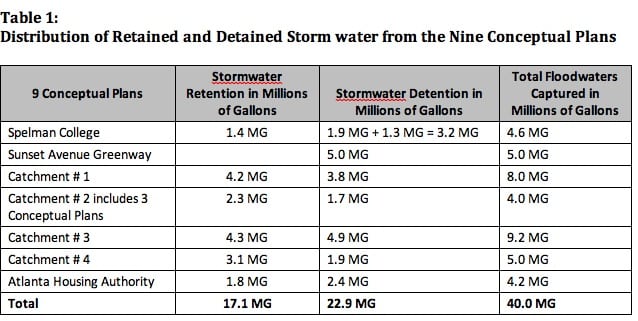 “It’s necessary to nurture collaboration among all the stakeholders,” said Eisenhauer, who was the inspiration behind Historic Fourth Ward Park with the lake that also captures storm water and prevents flooding. “There are 16 federal agencies involved.”

The group is hoping to meet with the presidents of each of the colleges – Spelman, Morehouse College, Clark Atlanta University, the Morehouse School of Medicine, Morris Brown College and the Interdenominational Theological Center. It also hopes to bring in the local, state and federal governments as well as civic organizations to prepare “shovel ready projects” that could be implemented as money becomes available.

Eisenhauer estimated it would cost between $40 million to $80 million to fully implement the plans over the next 10 years.

“It’s realistic, futuristic and sustainable,” said Dr. Noibi, who added their work is complementary to the efforts of the EcoDistrict, which will be holding its national summit in Atlanta in October. “We want a plan that will solve the problem. The work we are doing – greenfield infrastructure – is a good example of sustainability. We cannot get it institutionalized until we get the leadership of the colleges working with us.”

Eisenhauer also expressed hope that there will be plans for new infrastructure spending coming out of Washington, D.C., which could help the plans become a reality.

“This project has provided us an opportunity to build a bridge between the academic and the downstream communities of Vine City, English Avenue and others,” Dr. Noibi said. “Now they are talking.”

President Campbell described the 8,000 students and 3,000 faculty and staff members of the AUC as a largely untapped resource in the efforts to revitalize the nearby communities.

“We take up almost 300 acres on the Westside. Physically we take up a lot of space,” said Campbell, who talked about the proximity of the neighborhoods to the colleges. “In point of fact, they feel very separated from each other.”

Previous Article
Tested and proved in the South
Next Article
‘Fences’ not cinematic, but film version of August Wilson’s play a sure-footed shot at truth-telling