Atlanta and DeKalb County are passing some significant milestones in their efforts to promote sustainable, green practices when it comes to energy and water.

Both Mayor Kasim Reed and DeKalb CEO Burrell Ellis have joined in grand opening events in recent days to open fueling stations for CNG vehicles, which are fueled by compressed natural gas.

Two other environmental advances include Atlanta’s newly approved deal that aims to provide a pot of up to $500 million to retrofit commercial and multi-family buildings to curb water and energy consumption; and a vow by two state lawmakers to try again to convince the Legislature to approve tax credits for CNG vehicles.

The new CNG facility in Downtown Atlanta opened Wednesday to the public, and is aimed at the fleets of taxis, shuttle vans, waste-hauling trucks and any other vehicles that run on CNG. The facility, located on Whitehall Street, was opened by PS Energy Group, Inc.; Clean Energy Fuels Corp.; and Clean Cities Atlanta.

The station actually is part of a network of PS Energy facilities in Lithonia, East Point, and Tucker. A station near Atlanta’s airport, in College Park, is operated by Clean Energy Fuels Corp. 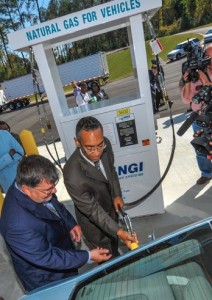 This network of CNG fueling facilities is funded in part though the Clean Cities Atlanta petroleum reduction program, which is a federal program backed by the U.S. Energy Department.

Parsons has introduced bills that would provide tax credits aimed at promoting CNG vehicles, and tax exemptions from sales and use taxes to promote the use of natural or artificial gas in manufacturing. Both bills died in the House.

In DeKalb, Ellis joined in the grand opening on Oct. 10 of a CNG fuel station on Clevemont Road. The fuel comes straight from DeKalb’s Renewable Fuels Facility at the county’s Seminole Road Landfill.

DeKalb’s Sanitation Department has converted 40 of its vehicles from diesel fuel to CNG, and has a goal of running its entire fleet of 306 waste trucks on CNG. The county intends to reach that number by either adapting or replacing existing trucks in the fleet.

The CNG fueling station is open to the public.

The DeKalb facility, like the one in Atlanta, resulted from a partnership between the local government and the Clean Cities Atlanta petroleum reduction program. The system is overseen  by Energy Systems Group.

Atlanta’s effort to create an infrastructure bank for retrofitting builidings was approved Thursday by the city’s Downtown Development Authority.

The DDA’s board approved a resolution creating a Clean Energy Atlanta Program that would operate in a clean energy finance district, should the city create such a district.

The program envisions Atlanta creating a district in which property owners would agree to pay additional property assessments that would be used to pay for clean energy improvements, according to the legislation.