By Guest Columnist STEPHANIE STUCKEY BENFIELD, executive director of the GreenLaw, an entity that has been providing legal and technical assistance to Georgia’s environmental community since 1992

As the mother of two young children, I try to teach them a few basic life lessons. Treat others with honesty and respect. Tell the truth. Clean up after yourself.

These are lessons that King America Finishing (KAF) has unfortunately failed to heed. The Chicago-based textile manufacturer illegally dumped harmful toxins into the Ogeechee River for five years, resulting in the worst fish kill in Georgia history in May of 2011.

Instead of responding to the death of 38,000 fish by holding the polluters accountable, the Georgia Environmental Protection Division (GA EPD) negotiated a backroom sweetheart deal with KAF. The result was a Consent Order, which allowed King America to continue polluting and disclaim responsibility.

An administrative law judge in Atlanta denied the local Riverkeeper standing and upheld the order. 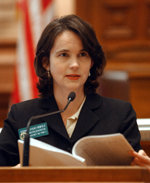 What was lost in this process was the public. It wasn’t just the fish that were harmed by King America’s failure to clean up its mess. The folks who fish, swim, paddle or just like to dip their toes in the river and daydream suffered as well. Fortunately, the Ogeechee Riverkeeper had the courage to stand up for the public’s interests, filing a legal challenge to the Consent Order.

The Georgia Environmental Protection Division seems to have forgotten the “Protection” part of its title. The state should be safeguarding Georgia’s rivers, not allowing them to be used as a dumping ground for industry.

And the public has the right to be engaged in the process of deciding what goes in our waterways. Public trust is earned when polluters are forced to clean up their act. Instead of issuing the up to $91 million in fines allowed by law, the EPD handed down a meager sanction of only $1 million in unspecified projects. Wrist slapping and sweetheart deals are no way to address the tough environmental problems our state faces.

Thankfully, Bulloch County Superior Court Judge John Turner brought some common sense to the process last week when he ruled that King America violated its permit and the public should have been part of the negotiations.

Quoting Jedi master, Yoda, of Star Wars’ fame, Turner lambasted King America’s failed efforts to clean up the river: “Do or do not. There is no try.”

Wise you are, Judge Turner.

The Superior Court ruling sends the case back to an administrative law judge in Atlanta for further proceedings.

Let’s hope the force remains with the Ogeechee Riverkeeper, and King America Finishing will learn to do the right thing: Clean up after themselves.

In addition to serving as GreenLaw’s executive director, Stephanie Stuckey Benfield is an outdoors enthusiast and nature lover. She was a vocal environmental advocate during her 14 years as a member of the Georgia House, serving on its Natural Resource Committee.