After seven years in the making, ground was broken Wednesday on the National Center for Civil and Human Rights in downtown Atlanta.

The ground also was broken in more ways than one.

The law firm of Jones Day announced that it was making a $350,000 gift, joining only a handful of other local law firms that have contributed to the Center, which will showcase the history, present and future of civil and human rights issues across the globe.

“We trace our roots in Atlanta back 150 years,” said Lizanne Thomas, the firm’s partner in charge, said at the luncheon following the ground-breaking. “This is an opportunity for us to deepen our commitment here at home.”

Thomas said the Jones Day Foundation and partners made the gift as a way to become the inaugural member of the Justice Society, a group of legal professionals who support the Center. She also said that she hoped more Atlanta law firms would contribute to the Center’s mission.

So far, the other law firms that have contributed are: Greenberg Traurig LLP; Paul Hastings LLP; and Troutman Sanders.

Reed started his comments by “acknowledging the extraordinary work of my predecessor — Mayor Shirley Franklin.” 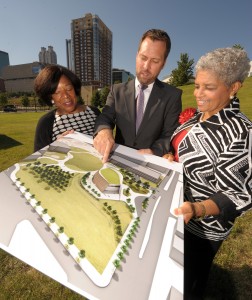 Before the ground-breaking ceremony on Wednesday, Deborah Richardson, executive vice president of the Center; Doug Shipman, CEO of the Center; and former Atlanta Mayor Shirley Franklin who chairs the Center’s board, look at an architectural rendering of the recently redesigned project. (Photo by Michael Pugh Photography)

He recalled how Franklin launched an 11-day effort to raise $32 million from the Atlanta business community to be able to acquire a treasured collection of the papers of Martin Luther King Jr., which had be scheduled to be sold at a Sotheby’s auction in New York.

“The City of Atlanta won the King papers and put us on the path of what we are celebrating right here, right now,” Reed said. “It is going to be a building and institution that is alive every single day.”

At the luncheon, Franklin insisted that “this is not one person’s vision or one person’s project.” She went on to say that “this is a very special day for Atlanta and for the world,” because the Center will become “a place to tell its story of peace and harmony.”

Franklin, who chairs the board of the Center, actually was recognized in two ways.

It was announced that an anonymous donor had made a donation of an undisclosed six-figure amount to create an annual Shirley Franklin Day at the Center. The endowment includes free admission for students in grades K-12 and special programming on or around the former mayor’s birthday, which is May 10.

The Center also gave its two inaugural “Bridge Builder” awards — one to Franklin and the other to Doug Shipman, the president and CEO of the organization, who has been involved in its development since day one.

The other major announcement was that women have emerged as a key constituency of supporters of the Center.

In 2010, the Women’s Solidarity Society established the Women’s Giving Circle to raise money for the Center. Under the leadership of Latonda Henderson, the Society has raised $600,000 toward a $1 million goal.

In all, the Center has raised $70 million for the project — $65 million for construction and $5 million for an endowment. The City of Atlanta provided $40 million in bonds from the area’s tax allocation district.

“We are fully funded for building the Center,” Shipman proclaimed at the luncheon while asking people to make contributions online to www.rightsgift.org. “All those gifts go to our programming, education and endowment. I stand here thinking of the fact that only in Atlanta could this happen.”

Originally, the Center was envisioned as a $125 million project, but fundraising proved to be more difficult that expected during the economic recession.

As a result, it was decided to build the project in phases, with the first phase being scaled down to a size where it could be built with the funds that it already had in hand. The Center is expected to open in the late spring of 2014.

But A.J. Robinson, president of Central Atlanta Progress, which has been championing the effort to build the Center, said the work had only just begun.

“Phases Two and Three hopefully coming very soon will require the same kind of generosity to help complete the entire vision of the Center,” Robinson said. “The journey has been long, but it’s not over yet.”