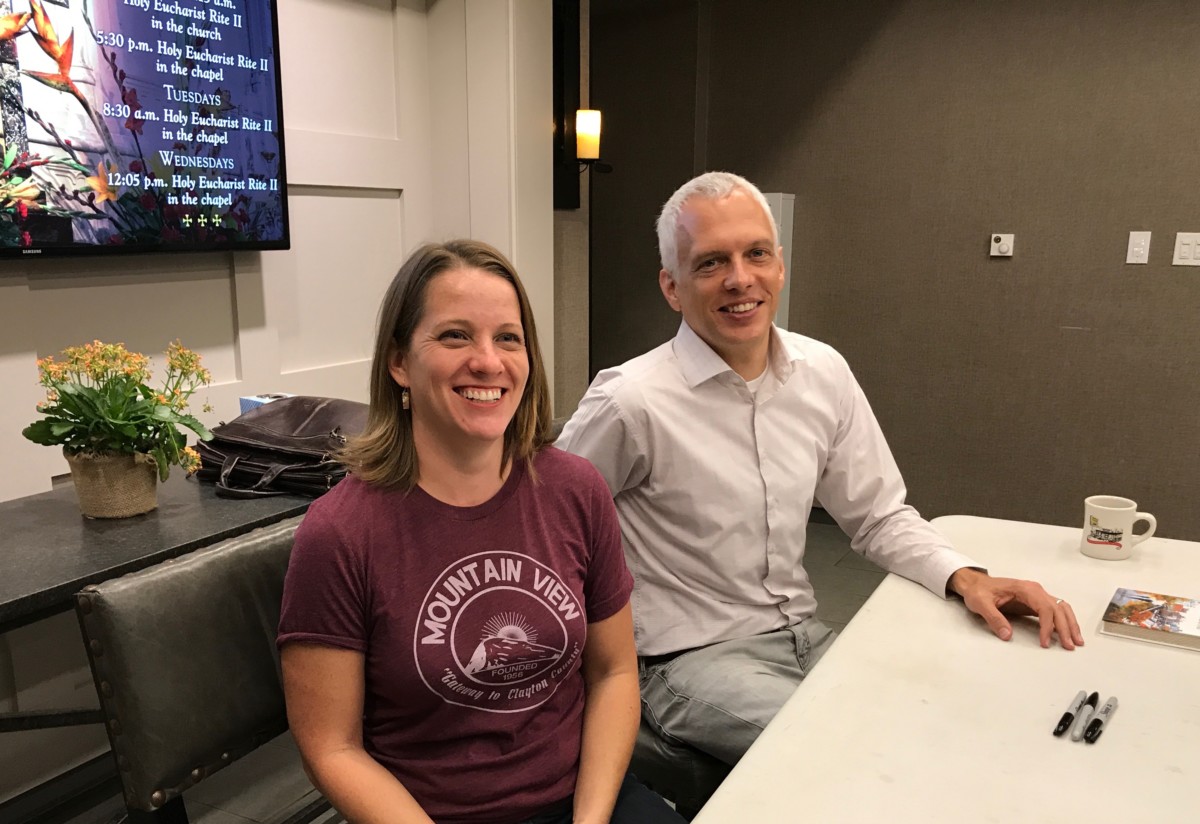 Atlanta’s largest mass of concrete – Hartsfield-Jackson International Airport – sits on top of the headwaters of the Flint River.

In looking over the acres and acres of concrete, it’s hard to envision streams and rivers that used to run through what once were working-class neighborhoods with 1950s-style homes lined with mature trees.

But Hannah Palmer and Ryan Gravel have done just that. 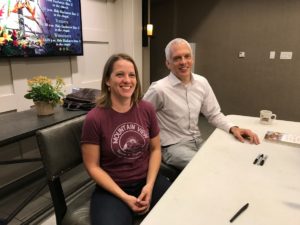 Palmer, who grew up around the airport, has just published her book: “Flight Path: A Search for Roots Beneath the World’s Busiest Airport,” which traces her ties to the communities that were enveloped and erased by the airport. One of those communities was the City of Mountain View, which actually was dissolved (its charter taken away) and obliterated from the map to make way for the “new” airport, which opened in Sept. 21, 1980.

Earlier this year, Palmer teamed up with Gravel, of the Atlanta BeltLine fame who has his own consulting firm – Sixpitch, to develop a vision of what the area around Hartsfield-Jackson could be if we were to reclaim our natural amenities – such as the Flint River. The Finding the Flint project is funded by American Rivers and the Conservation Fund in partnership with the Atlanta Regional Commission.

Both Palmer and Gravel presented their ideas and vision at the Oct. 6 meeting of the Sustainable Atlanta Roundtable, a monthly meeting of people interested in the environment and sustainability.

They presented the vision that is now being promoted by the newly-formed Finding the Flint Working Group.

“You can see the river disappear under the airport, but it’s still there,” Palmer said. “How can we restore those creeks and how can we create spaces for people.”

“This is just to inspire people – to have people see the possibilities of the Flint River and to support the health of the river,” Gravel chimed in. 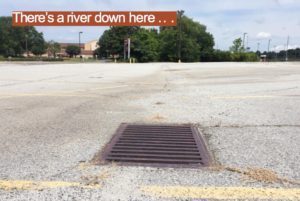 “There are not places to watch airplanes take off and land,” Palmer said. In their study, they identified several observation points that could be turned into viewing plazas for people attracted to the romance of air travel. Think Peachtree-DeKalb Airport and the 57th Fighter Group Restaurant.

Better yet, for us old-timers, we remember when the old airport (which was demolished a couple of years after the new one opened in 1980) had an observation deck right in the main terminal. I still remember us buying ice cream cones from a vendor at the entrance and walking up a ramp to see the planes take off and land.

“The airport is an underutilized amenity,” Gravel said. “We don’t take advantage of it as a place-making opportunity.”

So Sixpitch created a series of possible scenarios – showing what currently exists and then creating conceptual drawings of how those places could look if they were reconfigured for people and the natural environment.

“We have a phenomenal opportunity to connect people with nature,” Gravel added. “You could have a 1,200-acre park on the south side of town.”

The Finding the Flint Working Group is inviting stakeholders to a meeting later this month to build support for the concept. The Aerotropolis Atlanta Community Improvement District and other organizations seem to be embracing the idea. 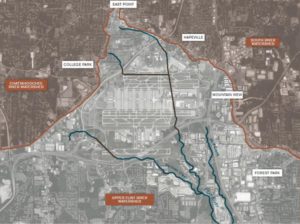 “They consider this a priority, and they are focused on the greenway plan,” Palmer said, acknowledging the difficulty of working with numerous cities and counties that converge in the airport area and touch the Flint River. “If we are really going to help the river. we have to work across all these jurisdictions. We all care about the health of the river.”

Ben Emanuel with American Rivers – Georgia (working with the Flint Riverkeeper), said the Flint will have to remain piped when it goes under the actual runways, but it is possible to daylight sections of the river both north and south of the airport.

“There are ways to restore the stream corridor around the airport,” Emanuel said. “You can take an existing ditch and restore it into a creek.”

Given its elevated location, Atlanta natural geography is full of creeks, springs and rivers – many of which have been buried and put in tunnels. The Gravel-Palmer vision for the Southside is one that could be replicated all over Atlanta.

“We have buried almost all our creeks in Atlanta,” said Palmer, who has combined her love of history with urban design.

She is focused on the communities around the airport because that’s where she grew up – having lived in three houses that no longer exist because of the  expansion of the airport.

“I choose to be here because my roots are here,” said Palmer, believing the area can become an amenity for the entire region. “We want to create awareness and get people inspired with a big vision for the Flint River watershed. The Southside can be someplace with a soul, a heart and a river.”

Possible before and after shots of what can happen on the Southside: 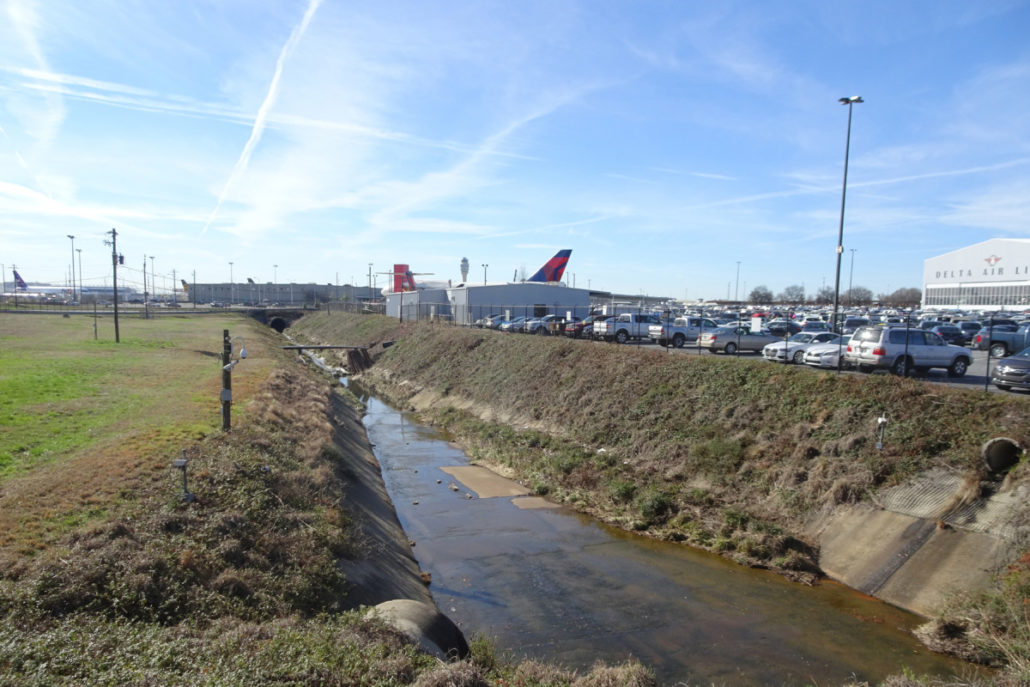 Existing ditch that is really the headwaters of the Flint River near the Delta Flight Museum (Special: Sixpitch) 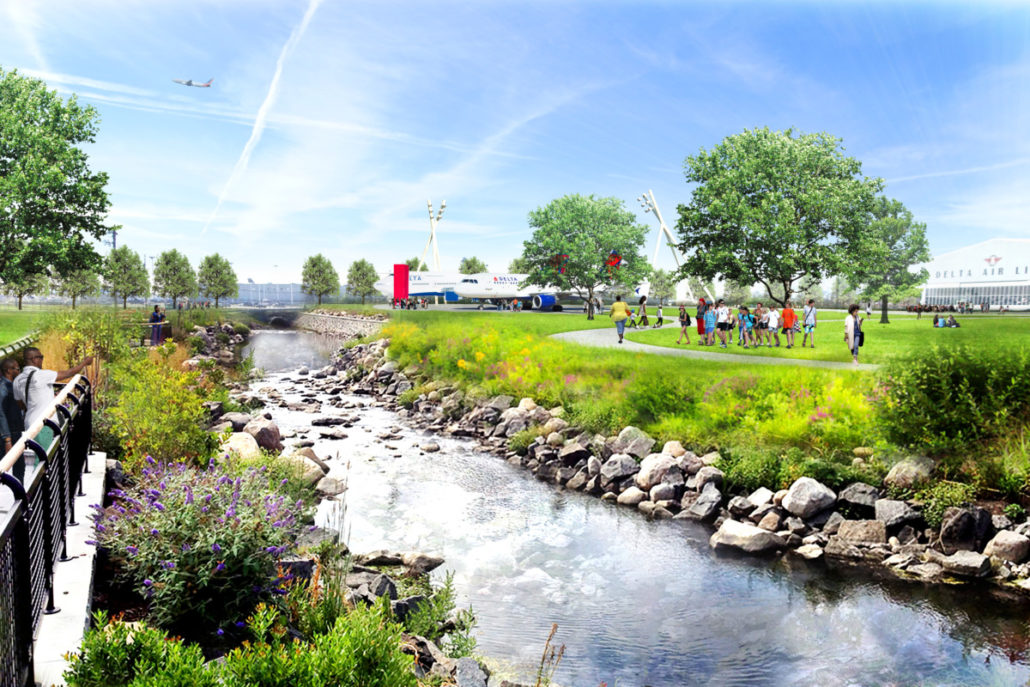 A conceptual drawing of how the ditch could be turned into an environmental amenity (Special: Sixpitch) 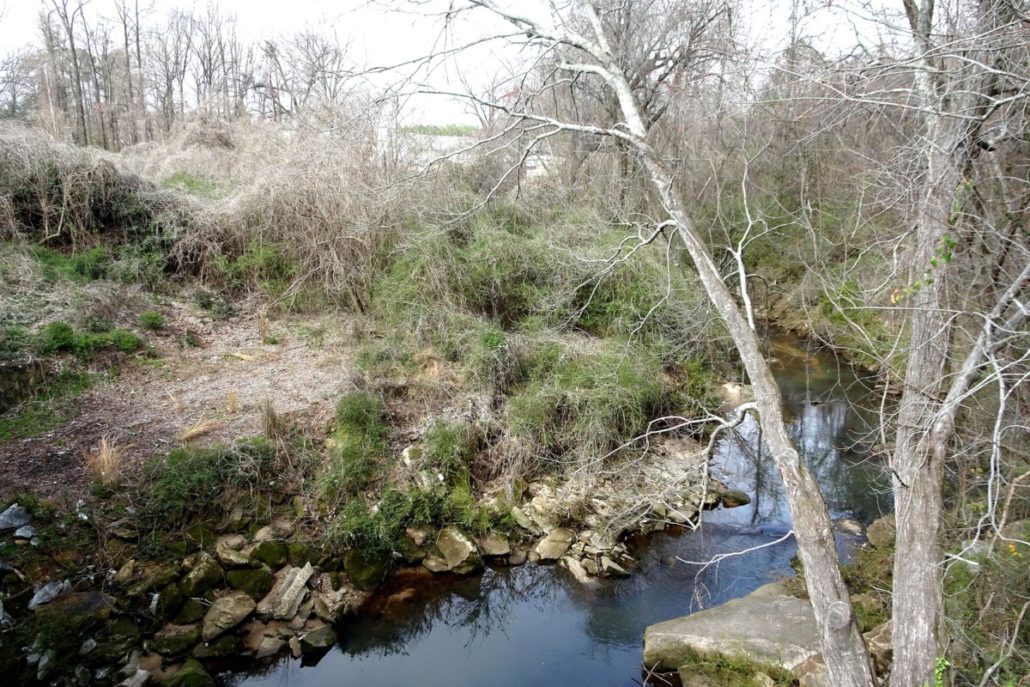 A section of Flint River near the airport (Special: Sixpitch) 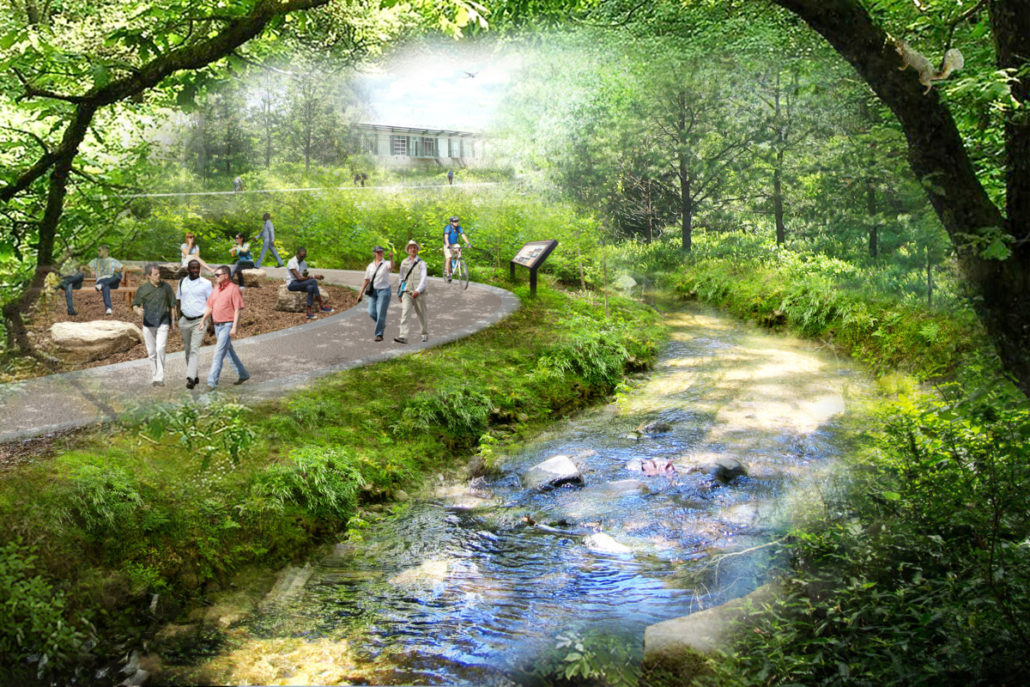 A conceptual drawing of how that same section of the Flint River could look with a little tender love and care (Special: Sixpitch) 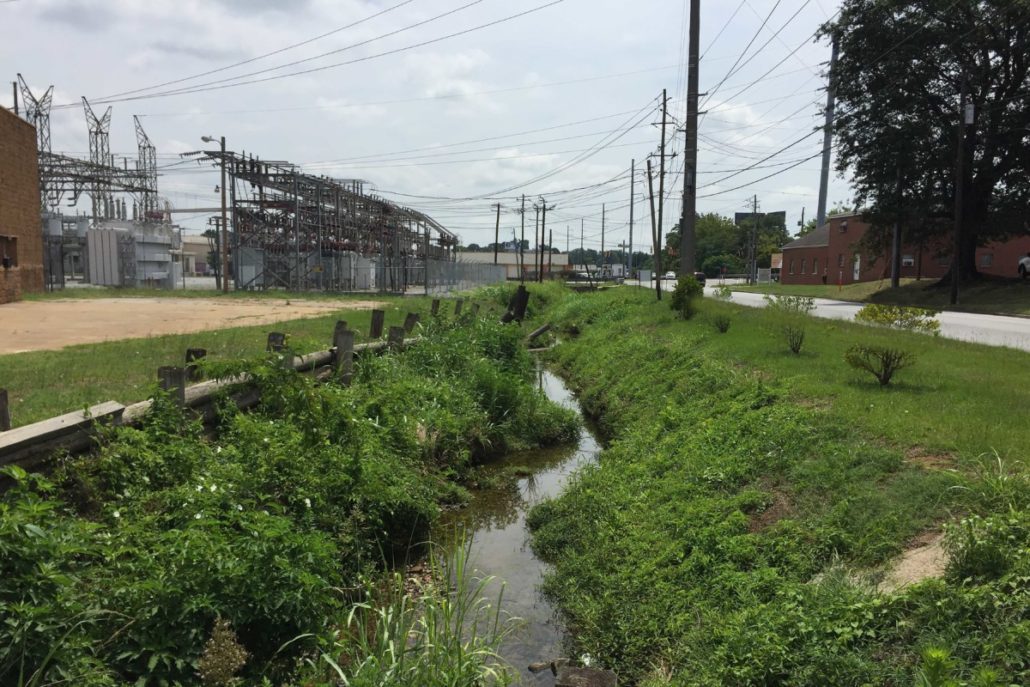 The Flint River is just a ditch in some spots south of the airport (Special: Sixpitch) 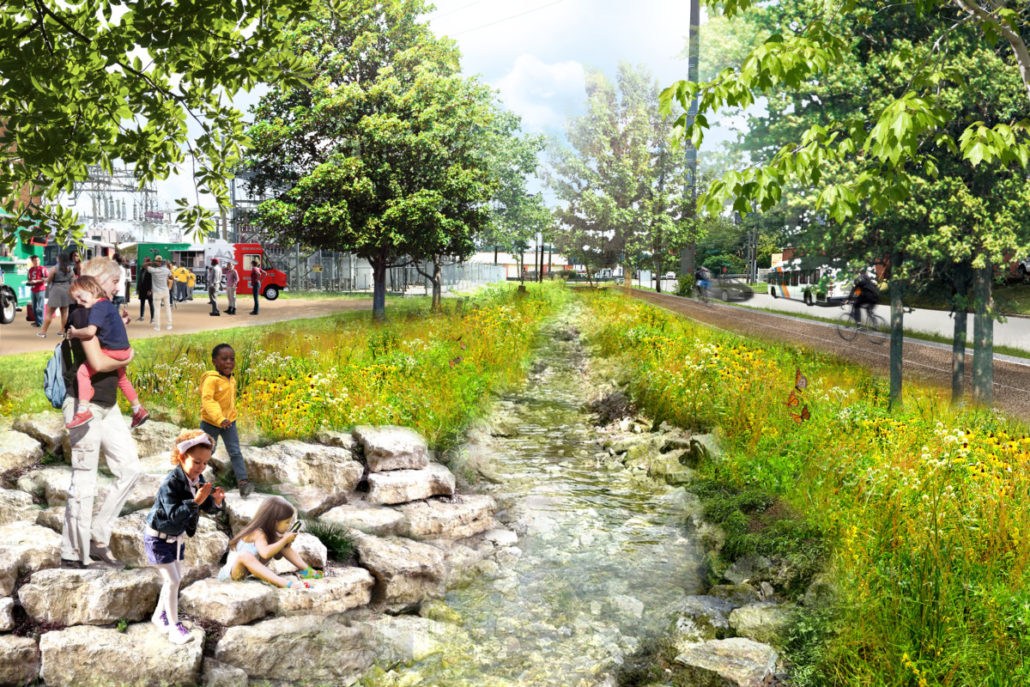 A conceptual image of how that same corridor could look if turned into a natural amenity Special: Sixpitch)

Bacterial testing of river water a new feature of Float on the Flint this autumn
David Pendered July 26, 2018 8:44 pm