Repair or replace? That’s the question facing GRTA as it considers its fleet of aging buses. The answer isn’t obvious. 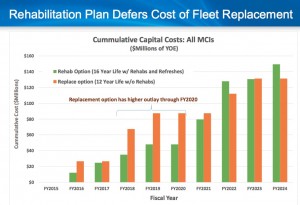 GRTA is considering costs associated with addressing the maintenance and replacement needs of its bus fleet. Credit: CH2MHill

Repair is cheaper for the next six years. But after that, replacement is the less expensive option, according to a consultant’s report presented Wednesday to GRTA’s board.

GRTA officials have presented the figures to Gov. Nathan Deal’s staff, and to the governor’s budget writing agency, the Office of Planning and Budget. The timing suggests GRTA may seek some level of funding in the state’s upcoming FY 2016 budget, which the next governor will present to the Legislature in January.

However, cost along isn’t the only consideration, Kirk Fjelstul, GRTA’s executive director, said during the presentation.

There’s reliability and cost management to take into account.

“We don’t look at what’s cheapest to do – cheapest is to do nothing, ever, and hope stuff doesn’t break,” Fjelstul said. “This is about controlling corrective costs so we have more predictive budgets … and maintain quality service.”

Fjelstul is raising the issue of long-term fleet maintenance for a state authority that has had the luxury of a young fleet. Until now. 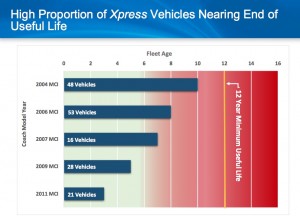 Nearly a third of GRTA’s buses are nearing the end of their life cycle. Credit: CH2MHill

Almost a third of GRTA’s fleet is nearing its life expectancy, according to a report prepared by CH2MHill.

These vehicles are a decade old, and the federal government says buses can be retired when they hit 12 years. If buses are retired before 12 years of use, the transit agency has to repay a portion of the federal funds the agency used to buy the vehicles, Fjelstul said.

GRTA’s fleet was scheduled to receive funding from the proposed transportation sales tax. When voters in metro Atlanta rejected the tax in 2012, GRTA was left without a source of funds to implement a significant program to renew or replace its fleet.

GRTA’s fleet includes 166 MCI buses, which are the familiar ones with the blue X emblazoned on the side. GRTA also owns nine CNG buses that, evidently, are not used in the daily fleet but are available if needed.

Questions raised by board members focused on the benefit of rehabilitating buses, and if the rehab program would be conducted evenly across a fleet that contains buses that may have widely different mileages. 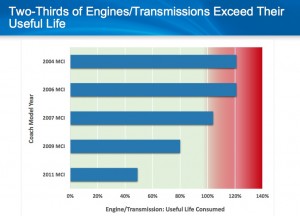 The engines and transmissions in a majority of GRTA’s fleet is at the end of its useful life. Credit: CH2MHill

“In the private sector, from a business standpoint, we want to know the remaining value of those assets,” said GRTA board member J.T. Williams, a developer. “At 2024, we’d have buses that are about to give out, as opposed to new buses.”

GRTA board member Martha Martin wondered if the rehab program would be identical for each vehicle, regardless of its mileage. Martin has owned a trucking company for 43 of her 50 years in the trucking industry.

GRTA Vice Chairman Dick Anderson, who’s served in executive leadership in the public and private sectors, noted that GRTA may no longer need as a big a fleet as it has.

“Rather than rehabilitating 160, why not buy 40 new buses,” Anderson said. “Buy new, and operate at a higher capacity.”

Fjelstul responded that all the questions have merit and will be discussed in the future.

That said, Fjelstul maintained that the primary issue is to develop a strategy that will keep buses that commuters want to ride on the road, and to do so at a predictable cost.

“There’s not a simple answer,” Fjelstul said. “At this moment in time, we’re indifferent. We feel like the best thing for our bottom line is a rehab solution. What’s you’re seeing here is not the budget request. It’s the cost of the program.

Previous Article
More calls for Hawks GM Danny Ferry to step down as focus turns to treatment of star Dominique Wilkins
Next Article
Chattahoochee Riverkeeper’s Sally Bethea to be saluted at 20th anniversary gala on Oct. 14