With the clock ticking on funding for Atlanta’s only region-wide bus service, GRTA is making its case with Gov. Nathan Deal and state budget writers for enough money to keep the buses on the road.

“We’re doing all we can to get assurances,” Jannine Miller, GRTA’s executive director, said Wednesday at the monthly board meeting of the Georgia Regional Transportation Authority.

The strength of Georgia’s economic recovery will be a key determinant of whether the state funds Xpress after June 2013. The bad news is that Georgia’s latest revenue figures, released Dec. 7, don’t send a clear signal about the hoped-for recovery.

The headline on the governor’s revenue report was: “November revenue offers mixed results.”

Deal announced that Georgia’s net tax collection for November was down 0.7 percent compared to November 2011. The $1.35 billion collected represented a decrease of $9 million compared to a year ago, the governor reported.

However, there was some good news. 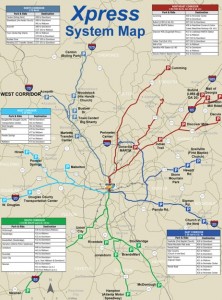 These numbers are important to Xpress and the 2 million riders it serves every year.

They offer the best set of tea leaves available for guidance on the potential for the state to fund Xpress service in the current 12 metro Atlanta counties that are served.

Miller didn’t elaborate on the issue of state funding for Xpress. She touched on it briefly in her routine update to the board.

“We’ve been working very closely with the governor, OPB [Office of Planning and Budget, which serves as the governor’s budget office], and the budget offices of the House and Senate,” Miller said.

“There are a lot of restraints on the budget [and] we’re doing all we can to get assurances,” Miller said. “It will come down to state resources.”

The governor’s report on revenue collections for the month of November included these headlines: