A new era of “streamlined” development regulation has taken effect in metro Atlanta and throughout Georgia, meaning that big proposed projects are able to move more quickly through government review and into construction. 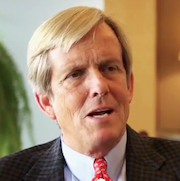 Bob Voyles, a developer who serves on the GRTA board member, asked several questions about Georgia’s new development regulations.

The new rules roll out as official proposals for three big, residential/commercial projects have been submitted since July. Each of them – two in Buckhead and one in Sandy Springs (inside I-285) – is politically sensitive because each is a high impact project that has the potential to create jobs and tax revenues.

The board that oversees GRTA, the Georgia Regional Transportation Authority, on Wednesday heard presentations about the development regulations the state implemented July 1. The board also heard how its own planners and the ARC intend to respond to the state’s actions.

The three hot button projects include: 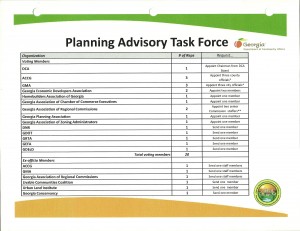 These agencies had a seat at the table to rewrite the state’s development regulations. Credit: Department of Community Affairs

Georgia’s new rules for reviewing big developments were adopted by the board that oversees the state Department of Community Affairs.

Click here to see a larger version of the chart (right), which includes a list of agencies that participated in rewriting DCA’s development regulations.

The DCA adopted the rules in April, less than a year after Gov. Nathan Deal vetoed, in May 2011, Senate Bill 86 – in which the Legislature passed a set of dramatic changes to the state’s development regulations.

DCA’s presentation to GRTA prompted several questions from Bob Voyles, who chair’s GRTA’s land development committee and whose credits as a developer include the 1180 Peachtree office high rise in Midtown.

Voyles said he appreciated the changes, considering his duel roles as a private developer and a GRTA policy maker. He pressed ARC planner Jon Tuley to specify the procedural changes in the review of big-scale projects known as “developments of regional impact.”

All DRIs in Georgia formerly fell under the purview of regional commissions, such as the ARC. That no longer is the case. 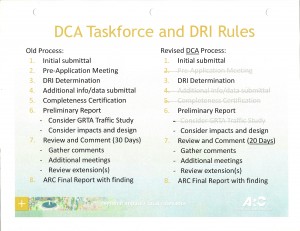 This chart shows the review steps that ARC has eliminated to respond to the new state regulations. The steps with the strike-through marks were eliminated. Credit: Atlanta Regional Commission

Voyles referenced the essay, “Tragedy of the Commons,” in which author Garrett Hardin explored the idea that individuals can deplete a limited resource even though they view it as one intended to serve the common good.

“Someone has to be looking out, because local jurisdictions are always pressed to do something,” Voyles said. “There’s one right now, because of the pressure to grow the local tax digest. Are you comfortable stripping that [DRI review] out?”

Tuley said the change was acceptable. He estimated that just 18 of perhaps 500 DRI reviews conducted since 2000 would not have occurred under the new rules.

“Most of the major projects we can think of, like Edgewood Retail District, Atlantic Station, Perimeter Place, would still be reviewed,” Tuley said. “It’s some of the ones that are a little smaller, a little more on the fence, that ARC didn’t think had so much a regional impact.”

Volyes said his math showed that less than 4 percent of the DRIs would have been affected.

“That’s an important metric, particularly for those groups that think you’re gutting the system,” Voyles said.

Incidentally, the proposed development near MARTA’s Lindbergh Station narrowly missed the new threshold for DRI review. The ARC returned it to Atlanta for consideration, along with recommendations that the site is best suited for office/residential, not a residential area with a 150,000-square-foot retail store.

All the changes underway come in the wake of an effort by the state Legislature to curb the authority of regional commissions to opine on proposed developments.

Senate Bill 86 would have eliminated the review of “developments of regional impact.” It represented the Legislature’s intention to push more decision making about projects back to local governments, as opposed to allowing regional commissions (such as the ARC) to have a larger degree of influence.

Deal vetoed the bill, at least in part, because DCA was already working to revise its development policies, Jim Frederick, DCA’s director of Office of Planning and Environmental Management, told the GRTA board. The new rules adopted in April represent the revisions the department envisioned, Frederick said.

Frederick walked through a visual presentation based on information available on the DCA’s website. One slide state the purpose of the new rules was to meet these goals: