GRTA is working diligently at the state Capitol to support funding for Xpress, the regional bus service that is in line to receive $8.7 million in state funding, if state lawmakers support budget requests by Gov. Nathan Deal. 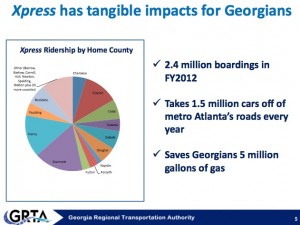 GRTA is presenting a case to lawmakers to support Gov. Nathan Deal’s recommendation to fund the bus service. Credit: GRTA

GRTA, which manages the bus system, is making the case to help lawmakers see the value in state funding for a transit system that reportedly takes 1.5 million cars a year off metro Atlanta’s roads with its 2.4 million boardings in fiscal year 2012.

Jannine Miller, GRTA’s executive director, on Wednesday walked GRTA board members through the presentation the agency is delivering to lawmakers. The message is simple: Xpress represents a good fiscal policy for lawmakers to support.

Xpress is on schedule to run out of operating funds in June. The service continues today only because the state provided $5.4 million to sustain it through the 2013 fiscal year, which ends June 30.

Once that money is spent, there simply isn’t funding available to continue the existing level of service.

Miller’s presentation identifies the value to the state of providing funds to continue Xpress service. It portrays the service as financially responsible and fiscally sound:

The Legislature is in the process of considering the governor’s budget recommendations. Subcommittees are meeting to hear presentations, such as the one by GRTA.

Once their reports are complete, possibly later this month, the Appropriations Committees of the House and Senate can issue their recommendations; the two chambers can vote on the budgets; and then conference committees can begin the work of reconciling differences between the House, Senate, and governor.

The $8.1 million figure is historic because GRTA has never before been funded in the state’s annual budget.

Its inclusion in this budget is significant because lawmakers historically have not eliminated funding from programs once they are established in the state’s major operating budget. Programs funded through the amended budget are much more vulnerable to being knocked off.

Deal hasn’t spoken from his bully pulpit about funding for Xpress. This is how he characterized his thoughts on transportation, in general, in his statement when he released the FY 2014 budget: