Just minutes after he was named GRTA’s executive director, Chris Tomlinson was busy Wednesday talking about potential synergy between GRTA and the state agency that oversees managed lanes. 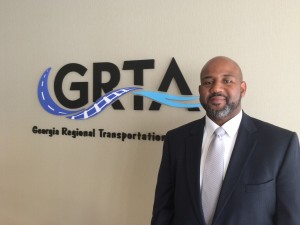 “We’ll roll out incentives to get more people to take advantage of transit,” Tomlinson said. “We hope to shift people out of vehicles, especially at the peaks, and take advantage of what transit providers already are doing.”

This outlook, to be achieved by clearly aligning the leadership of two state agencies that oversee alternate methods of transportation, evidently is what Gov. Nathan Deal had in mind when he nominated Tomlinson to the GRTA post on Nov. 24.

Tomlinson now serves as executive director of the State Road and Tollway Authority. Tomlinson will continue in that position and add the duties of directing the Georgia Regional Transportation Authority. GRTA’s board unanimously confirmed Tomlinson’s nomination at its meeting Wednesday.

GRTA’s Xpress buses travel along the managed lanes that SRTA oversees. Streamlining the management of the two agencies seems to make sense to the governor, especially as GRTA considers expanding  service – such as adding routes to connect the Perimeter business district with Kennesaw and Duluth areas – and making better use of new managed lanes slated to come on line in the future.

Tomlinson said he is has been a regular passenger on GRTA buses. He resides in Loganville and rode a GRTA bus in to work in downtown Atlanta. His perspective from the passenger seat has the potential to shape his leadership of the state agency that now provides some 2 million trips per year.

“One of the unique synergies we have in the transportation space, GRTA and SRTA, is to serve a customer base that comes to us by choice,” Tomlinson said.

“This gives us a unique perspective in the transportation discussion. People don’t have to vote for what we’re doing, but they do when they’re taking money from their pocket [to ride an Xpress bus or travel in a managed lane].”

Tomlinson succeeds Jannine Miller, who served from July 2010 until she stepped down in February to take a C-suite job with Home Depot. Miller quickly was appointed to the GRTA board by Deal, and she continues to serve in that capacity.

At SRTA, Tomlinson has overseen the end of tolls on Ga. 400. That task alone put him front and center in the region’s travel debate.

Behind the scenes, Tomlinson also oversees the state entity that has wide ranging authority in financial and travel arenas. The governor chairs the SRTA board.

In metro Atlanta, SRTA may be best known for overseeing the state’s managed lanes program – at least, since the Ga. 400 tolls were removed a year ago. Managed lanes are integral to Deal’s attempt to reduce traffic congestion and average trip times throughout metro Atlanta.

In addition, SRTA has authority in the area of transportation financing. SRTA can issue tax-exempt bonds to fund construction projects. SRTA also oversees the Georgia Transportation Infrastructure Bank, which has dispensed since 2008 more than $50 million in low-cost loans to fund transportation projects of the state and local governments.