Two more Atlanta contractors — H.J. Russell & Co. and C.D. Moody — have joined the general construction team that will be building the new Atlanta Falcons stadium, it was announced on Tuesday.

Russell and Moody, both minority-owned construction firms, will join the previously announced lead contractors of Holder and Hunt. Holder is an Atlanta-based construction firm that was founded in 1960 by Robert Holder and is now run by his son, Tommy Holder. Hunt, led by Bob Hunt, has built numerous football stadiums including six with retractable roofs. 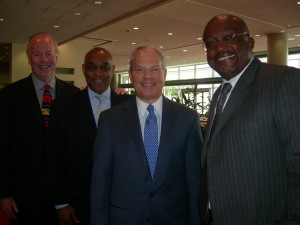 “We are very happy to announce that we rounded out our partnership,” said Tommy Holder, when making the announcement about Russell and Moody. Holder added that he has had experience working with each of the firms. He then asked Bob Hunt, Michael Russell and Dave Moody to stand.

The board of the Georgia World Congress Center Authority approved the general construction team that was proposed by the Atlanta Falcons. The new stadium will have a one-of-a-kind retractable roof stadium that will open and close much in the way that an aperture on a camera lens opens and closes to control the amount of light in a shot. 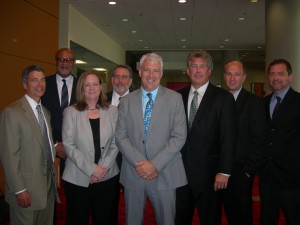 The GWCCA board also approved the revised conceptual design for the new stadium, which is based on the “Pantheon” concept that 360 Architecture had presented to the board in April.

Bill Johnson, the senior principal of 360 Architecture, has continued to work on the concept. Johnson said he has been   seeking to increase the open area of the roof, creating as much transparency of the building as possible, and opening up a window towards downtown that “could be quite spectacular.” 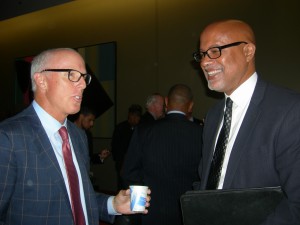 Johnson introduced principals from each of those firms to members of the authority at Tuesday’s board meeting.

The additional team members of both the architectural group and the general contracting group are part of the Atlanta Falcons and GWCCA’s commitment to meet the equal business opportunity goals that have been set by the City of Atlanta. The goal is to have at least 31 percent of the work on the new stadium project go to minority and women-owned firms.

Bill Darden, who is serving as the stadium project executive for the Atlanta Falcons, told the GWCCA board that the “equal business opportunity” plan was being “patterned” after the city’s experience in building the new Maynard H. Jackson International Terminal at Hartsfield-Jackson International Airport.