Have an app for that? Make certain Atlanta has enough air waves to serve mobile wireless users, group says

Everyone in metro Atlanta who has eyes on the new iPhone 5 has grand expectations that it will improve their lives, or at least be a lot of fun.

The only problem is that, eventually, there won’t be enough capacity to transmit all that data through the air waves. Everyone already knows what happens when the mobile spectrum is overloaded – slow Internet service and bumped calls. 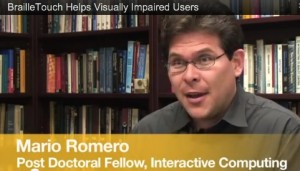 Mario Romero was a post doctoral fellow at Georgia Tech when he helped develop an app that allows for eyes-free data entry on a mobile device. Credit: tech.slash.org

The issue is critical to a surprisingly diverse group of people. These groups include those who use mobile devices, and those who write the apps – applications – that make money for inventors or are given away to serve a some purpose.

The world of users is expanding exponentially, ranging from those who store and use Groupon coupons on their smart phones, to those who arrange meet-ups on Foursquare, to those who buy a burger from a food truck that uses the Square credit card reader or look up directions on Mapquest.

Among inventors, just a glance toward Georgia Tech shows an abundance of apps. They range from Anystop, which provides real-time estimates of when the Tech Trolley will arrive, to BrailleTouch, a prototype app developed by Tech researchers to help blind people and others who want an eyes-free way to communicate with their mobile device.

Capacity isn’t yet a widespread problem in Atlanta. 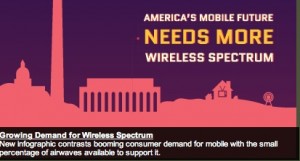 Mobile Future is one of the organizations working to expand consumer access to air waves to handle the growing use of mobile wireless devices. Credit: mobilefuture.org

But the region’s heavy use of mobile devices has prompted an industry group to reach out to consumers here to make sure they’re abreast of the need for Washington to make sure that capacity doesn’t become a problem.

Mobilefuture.org is among the organizations working on the issue and urges consumers to contact their congressional represenatives and “ask them to support policies that encourage continued investment and innovation to build next generation networks and increase the supply of mobile spectrum.”

The issue for these groups is less the physical structures needed to support mobile technology than it is the spectrum itself. The current campaign is for the federal government to grant a share of spectrum to wireless subscribers than the current allotment of 16 percent. The remainder is used by the government and broadcasters.

Congress is already at work.

One topic the House is exploring is how to implement President Obama’s call for federal agencies to give up their unused portions of the spectrum. Obama signed an executive order directing agencies to increase their efficiency in using assigned spectrum, in order for some portion of it to be reassigned to the open market. The proposal has Republican support:

Another topic is job creation in a market segment called the “apps marketplace.”

The goal is to foster the development of apps and thereby promote the creation of jobs in a segment expected to continue growing at a breathtaking speed, according to the backgrounder on last week’s meeting of the Subcommittee on Commerce, Manufacturing, and Trade:

For more information go to mobilefuture.org