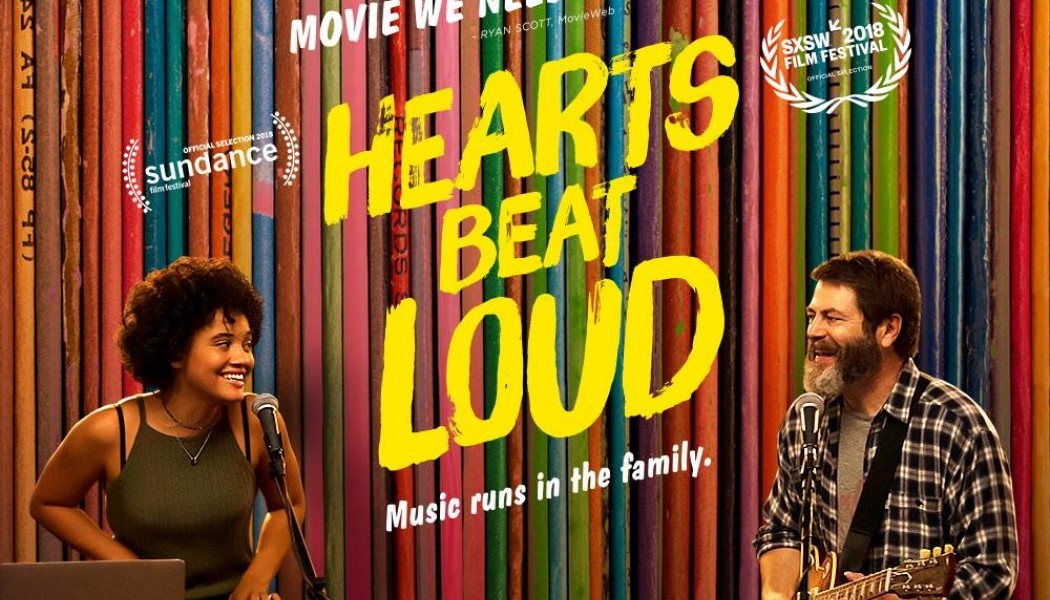 Heartfelt and, yes, heartwarming (aaarrgh, what a buzzkill word!!), “Hearts Beat Loud” reminds us there is life at the movies beyond dinosaurs and third-rate “Star Wars” one-offs.

It’s a small, smart picture about a father and daughter beautifully played by Nick Offerman (“Parks and Recreation”) and KIersey Clemons (“Flatliners,” “Transparent”). 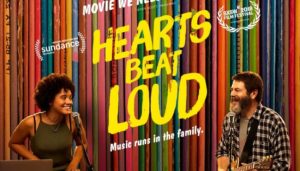 Frank is a widower who has raised his daughter, Sam, on his own. Now he’s facing an uncomfortable onslaught of change.

Sam is taking off for college, heading cross-country from Brooklyn to UCLA to study pre-med.  Perhaps not so coincidentally, Frank, a self-described “purveyor of pressed vinyl,” has decided to shutter his record store, a Red Hook mainstay for almost two decades.

Dave’s just changed marijuana dealers, he explains, and things are working out fine.

Weed is one thing; a daughter, well….

Something that’s always bonded Frank and Sam is music. Time for a “jam sesh” wheedles dad as daughter tries to do a little pre-med prep. (Yes, it’s increasingly clear who the real kid is here) Anyway, their noodling around produces an irresistible little song that Frank impulsively posts on Spotify. Suddenly, We Are Not A Band, as Frank has ironically dubbed them, is in the same rotation as Iron & Wine and Spoon.

And Frank, who never quite gave up his rock-star dreams, begins pumping Sam to postpone college. After all, some music-industry honcho already wants to talk tours and recording contracts. 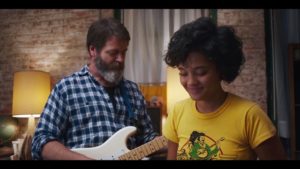 A scene from “Hearts Beat Loud”

One of the myriad minor miracles of the movie is that none of this is presented in a sensationalized A-Star (Or Two)-Is-Born manner. Writer/director Bret Haley’s’ approach is low-key and loving. Nothing is forced, not Frank’s sidelined, probably unrealistic ambitions, nor Sam’s ill-timed romance with Rose (Sasha Lane), who may be fated to be The Girl She Left Behind when college starts next fall.

Further, Haley understands how to be earnest without being overly earnest. To riff off Oscar Wilde, he recognizes the importance of being earnest as well as the riskiness in an era choking on irony and snark.

Offerman and Clemons are infinitely appealing as the movie’s father-daughter core. (Look for this title to show up on a lot of Father’s Day round-ups next year).

But they’re buoyed by an excellent supporting cast. Along with the aforementioned Danson and Lane, there’s a glam Toni Collette as Frank’s landlady (and maybe something more), plus Blythe Danner as Frank’s semi-dementia’d mom, doing an addled Carol Kane impersonation that’s utterly charming (Check out an old episode of the TV series “Taxi” to see what I mean).

Haley is right.  Hearts do beat loud.  We just need to take the time to listen.

Previous Article
Generous families power philanthropy in Atlanta
Next Article
Why Clarkston, Georgia Has Made Parks a Priority, and What Other Communities Can Learn from this Small City