Gwinnett county’s elected leaders are set to decide soon whether the November ballot will include a public vote on a 30-year, one-penny sales tax that would be used to build heavy rail from Doraville to points northeast and to expand bus lines.

But between the two people who will be at the top of Gwinnett’s ballot this year, there’s a gap on transit wide enough to fit a MARTA train.

Nicole Love Hendrickson, the Democratic nominee for Gwinnett County Commission chair, says she has been and is a big advocate of heavy rail. She gives the overall transit plan a ten out of ten and she wants to see it on the November ballot.

It’s because the plan has “22 new local bus routes, microtransit, arterial [priority bus] rapid transit — and we still get the benefit of having heavy rail,” Love Hendrickson said.

Republican candidate David Post is fine with some transit on tires. It’s relatively flexible, modular and easy to reroute, or to add or subtract stops. But he says Gwinnett isn’t densely populated enough to make heavy rail a good bargain.

“If they did heavy rail in Gwinnett County, my grandkids and their kids are still going to be paying for it,” Post said. 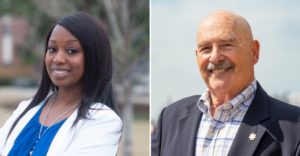 The most expensive miles of the plan are indeed heavy rail lines that would connect with the rest of MARTA’s system at Doraville, then run all the way up to the Gwinnett Place Mall area. That alone would come to something like $3.6 billion in Gwinnett sales tax pennies.

Then there are the “bus rapid transit” or “arterial rapid transit lines” lines that put buses more or less in their own lanes to speed through traffic.  Each of a dozen or so of those (one is a “maybe” project) are priced in the low nine figures in county spending.

Gwinnett’s penny sales tax would raise about $12.8 billion over 30 years for these projects. The federal government would pay much of the rest of the bill — which would total about $31.4 billion.

For Post, the money is too much for what he called a “convenience.” He knows that transit systems don’t make money — even the big ones like New York and London have to depend on public cash.

“But there’s a point where you where you have to say, ‘How much money are we willing to lose before it’s not worth doing?'” Post said. “Because transportation systems are a convenience. But they have to be used.”

Love Hendrickson said that connection to MARTA is only going to benefit Gwinnett in the long run.

“We are behind the times when it comes to mobility and and connecting to the region,” she said. “And this provides us further options … We should be forward-thinking in terms of providing options to residents … [and] also to people that want to come in and do business.” 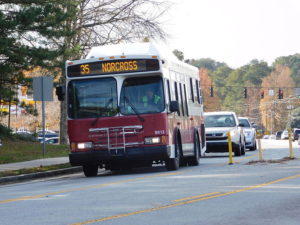 Gwinnett County already runs some bus service, but a penny sales tax would raise a lot of money — and buy a lot more. Credit: R32s on the E Train / CC BY-SA 4.0

It remains to be seen whether the question will be on the ballot though.

Their vote sends it the plan back to the Gwinnett County Commission, which must now decide whether to schedule a public vote on the plan.

The Gwinnett County Commission itself approved the plan back in June and sent it to the ATL.

In March, 2019 Gwinnett County voters turned down a slightly different transit plan, with 54.3 percent of people voting against.

Transit advocates at the time blamed the loss in part on the timing of the vote — in a low-turnout special election.

But some of the same objections that are appearing now also came up last year. For example, that waiting years and decades for heavy rail to open is a bad deal compared to setting up more bus lines now. And for another, that the Interstate 85 corridor would get more transit than would points further south.

Love Hendrickson said the low turnout in 2019 means the vote didn’t really reflect the what people in the county wanted.  But Post said the people have already spoken on the issue.