The great migration of monarch butterflies is underway, and the peak season for these symbols of hope to pass through metro Atlanta begins in a few weeks. 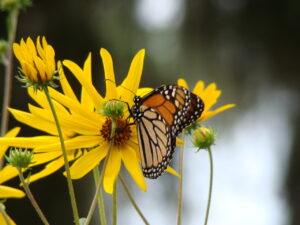 A monarch pauses to take on sustenance from a native Georgia wildflower in preparation for the flight toward Mexico. (Photo courtesy of Christa Hayes, Hayes Environmental Concepts)

From Sept. 29 through Oct. 11, butterflies with trademark orange and black wings are expected to be crossing this region’s latitude on their journey from points north, including Scarborough, Maine across 2,500-plus miles toward a destination in central Mexico. Two or three butterflies may be all that alight at any one time on any given blossom in metro Atlanta, this far from the major flyways. But this is enough for some who monitor monarchs.

Much has been written of the demise of insects in general and monarchs in particular. A just-released study by scientists in the United States and Mexico affirms climate change as one of three likely causes of the monarch’s population loss – climate change; the demise of a favored food, milkweed; and death during the autumn migration to wintering grounds.

All of which prompts Susan Meyers to offer one thought – plant a flower.

“That’s the message I want people to hear – that there is something they can do,” said Meyers, volunteer co-chair of Monarchs Across Georgia. 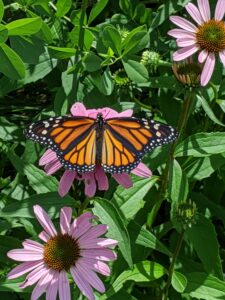 A monarch alights to eat from a bloom planted in Susan Meyers’ backyard in hopes of providing energy to migrating monarchs. (Photo courtesy of Susan Meyers)

Preferably the flowers planted will be ones that bloom in late September, providing monarchs who stop with sustenance for two huge endeavors – flying all the way to central Mexico, and surviving the food shortage that results there from millions of monarchs vying for a limited amount of nectar.

The request is simple and yet could be quite powerful, Meyers contends.

“Maybe it will inspire them,” Meyers said of folks who may hear the message.

“When we hear that climate change is responsible for the declining number of monarchs, it’s overwhelming, the sense ‘there’s nothing I can do,’” Meyers said. “But there are things we can do. Something as simple as planting flowers that bloom from late September into October can help the monarchs. Even in an apartment, you can put out a pot out on the balcony with blooming flowers.”

Meyers counts as colleagues a wide array of community scientists who are awestruck by the monarchs. Folks in Cape May, N.J., for instance, have been tracking the migration since 1990. That precedes by 11 years the formation of the steering committee of Monarchs Across Georgia. 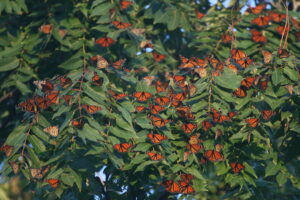 Monarch butterflies number in the tens of thousands as they pass through Cape May, N.J. on their annual migration from Maine toward a wintering place in west central Mexico. (Photo courtesy of the Cape May Bird Observatory)

Debbie Bass, of the Cape May County Department of Tourism, said she was delighted to share information and photos gathered by the Monarch Monitoring Project, a research and education project of New Jersey Audubon’s Cape May Bird Observatory.

One key project is a tracking system that shows monarchs tagged by in Cape May by community scientists being spotted in Georgia locations including Social Circle and Savannah. Cape May tags have been spotted in the Florida Panhandle, Bahamas, Houston, a Caribbean island and the monarch’s destination in Mexico – the Michoacán state, which stretches from the Sierra Madre mountain range to the Pacific Ocean.

Bass highlighted another initiative, which is the same as the one Meyers mentioned – planting flowers that bloom in September and October to provide sustenance to migrating monarchs. The Cape May crowd endorses the National Wildlife Federation’s Garden for Wildlife. The project now covers more than 3.5 million acres of backyards and greenspace planted with habitats that support wildlife including birds, bees and butterflies. 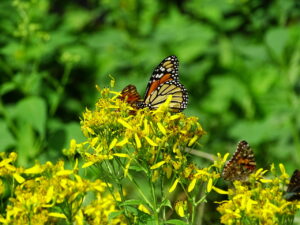 Meantime, the role of climate change on the disappearance of monarch was identified a report made public July 19. Erin Zylstra, the lead researcher, said in an email the statement released by Michigan State University provides a great summary of the research findings. Zylstra also provided the technical article as it was published in “Nature Ecology & Evolution.”

The article contains this prediction:

Which circles back to Meyers and her suggestion of a way to help monarchs on their autumnal exodus. Gardeners as well as monarchs reap rewards from the act of planting flowers that bloom long after blossoms of summer are gone, she said.

“It’s a hopeful thing to do,” Meyers said.

Note to readers: To help nourish monarch butterflies passing through metro Atlanta on their great migration, Monarchs Across Georgia recommends gardeners plant species of milkweeds that are appropriate in North Georgia. A guide for gardeners has been prepared by Georgia’s Department of Natural Resources. 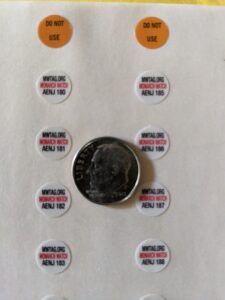 Tags attached to the bottom of one wing of a monarch butterfly contain information that can be reported for free to stations that monitor the butterfly’s migration. (Photo courtesy of Susan Meyers) 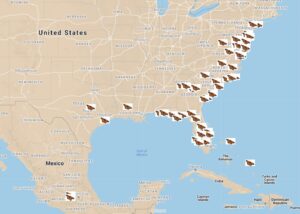 Monarch butterflies tagged in Cape May, N.J. have been tracked as far south as Michoacán, Mexico and an island on the Caribbean Sea. (Image courtesy of New Jersey Audubon)

Previous Article
The way we were
Next Article
In forum on housing affordability, council president candidates reveal how they think and lead