Helping Atlanta do what is hard, but right 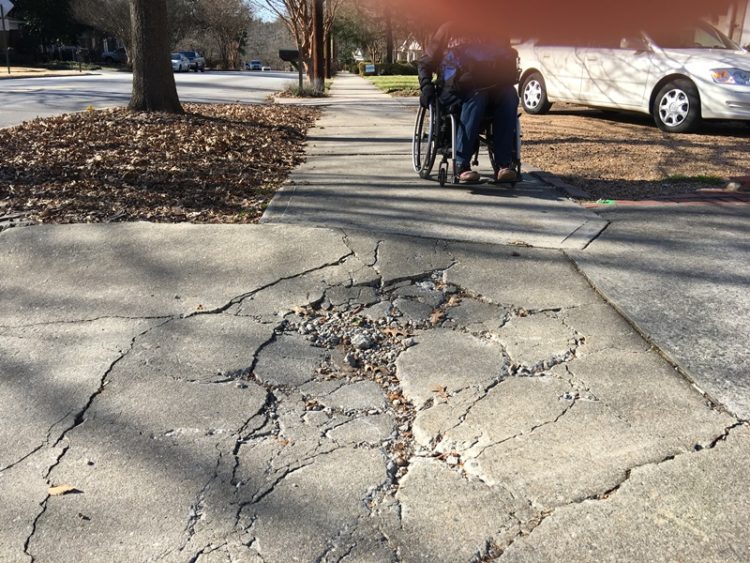 For James Curtis, a plaintiff in a lawsuit filed against Atlanta over dangerous sidewalks, broken pavement at 80 Peachtree Hills Ave. makes traveling difficult and dangerous. Credit: Special to SaportaReport

Wheelchair users recently sued the City of Atlanta for failing to maintain sidewalks that are equally accessible to people with disabilities. The condition of Atlanta’s sidewalks is deplorable, and a class-action lawsuit for violating the Americans with Disabilities Act has been a long time coming. 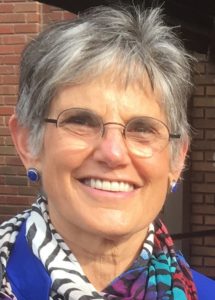 Injuries caused by broken sidewalks have forced the city to spend millions on payments to victims in the past. This lawsuit is different. It doesn’t seek compensation for plaintiffs. Instead, it aims to force Atlanta to modify its practices, install curb ramps and fix broken sidewalks. That’s the kind of concrete action steps we need.

The lawsuit also aims to compel Atlanta to comply with ADA requirements for safe pedestrian access in construction zones.

PEDS, an advocacy group dedicated to making our streets and communities safe and accessible to all pedestrians, is not a plaintiff. Yet we’re grateful to those with disabilities who have the passion and grit to move Atlanta toward a future where sidewalks and curb ramps receive some long-overdue attention.

Broken sidewalks and missing ramps are barriers that prevent people with disabilities from reaching destinations, maintaining their independence, and enjoying the city. Falling, tipping over, rolling wheelchairs in the road, experiencing near misses and being stranded are common facts of life.

The likely outcomes will benefit everyone, not only people with disabilities. If you’ve ever tripped on a broken sidewalk or seen a parent lifting a baby stroller over a curb, a child learning to ride a bicycle or someone struggling with heavy luggage, you know that.

Atlanta’s elected officials express strong support for sidewalk maintenance. Yet they’ve done little to back their words with necessary funding. 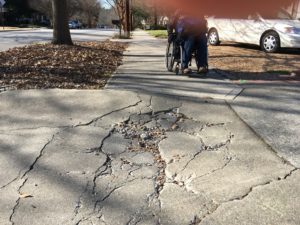 For James Curtis, a plaintiff in a lawsuit filed against Atlanta over unequal access to sidewalks, broken pavement at 80 Peachtree Hills Ave. makes traveling difficult and dangerous. Credit: Special to SaportaReport

Even the Renew Atlanta program – which focuses on infrastructure maintenance – allocates little to sidewalk repairs. In 2014 the proposed project list earmarked $40 million to sidewalk maintenance and $35 million to curb ramps. But by the time the referendum went to voters in March 2015, those sidewalk dollars had vanished; allocation for curb ramps was cut to just $5 million.

A big part of the problem is Atlanta’s own sidewalk policy, which makes individual property owners responsible for repairing sidewalks. The ordinance is unfair, politically unpopular, and nearly impossible to enforce – so much so that the Department of Public Works no longer tries. The policy serves primarily as an excuse for doing nothing.

How much is the city investing to address the backlog of broken sidewalks and missing ramps? No one knows, and officials at the city’s DPW have done little to find out.

In a 2009 settlement with the U.S. Department of Justice, the City of Atlanta agreed to install curb ramps on all streets that had been resurfaced since the Americans with Disabiliities Act went into effect in 1992. Six years have passed since the 2012 deadline, but the city has accomplished little to date.

During a panel discussion in 2016, I asked the DPW commissioner for a status report on the settlement. His response: The city had received an extension.

The current lawsuit heightens the need for transparency. A city spokesperson said Atlanta, “is not in violation of the [2009] agreement, as it is ongoing. The City continues to . . . cooperate with the DOJ by reporting its progress on an annual basis.”

Really? Please show us the data. 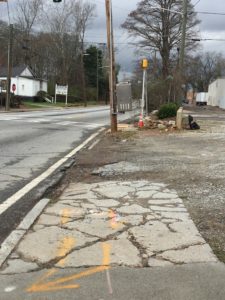 Crumbling and non-existent sidewalks makes this area virtually impassable for a person in a wheelchair, and dangerous for pedestrians. It’s located near 2018 McDonough Road, near Jonesboro Road. Credit: Special to SaportaReport

Atlanta is not the first jurisdiction to be sued for ADA violations. Increasingly, courts have become the primary venue for forcing cities to make sidewalks accessible to all users:

The backlog of broken sidewalks and missing ramps here is enormous. Fixing it will be expensive. Indeed, at a recent Transportation Committee meeting, the DPW Commissioner estimated the cost at over $1 billion.

“We don’t want to fight the city,” Lawson said. “Allocating money that needs to be spent but maybe isn’t popular, it’s a hard thing. We want to help them do what is hard but right.”

While a settlement may take years of negotiation, I’m optimistic the outcome will resolve what might otherwise remain an intractable problem.

Note to readers: Sally Flocks is the founding president of PEDS, an advocacy organization focused on promoting walk-friendly policy, street design, and funding changes. She has been unable to drive most of her adult life, which sparked her passion and awareness of issues important to people who walk. Flocks says the skills she honed earning a doctorate in history have helped her advocate effectively for pedestrian safety. 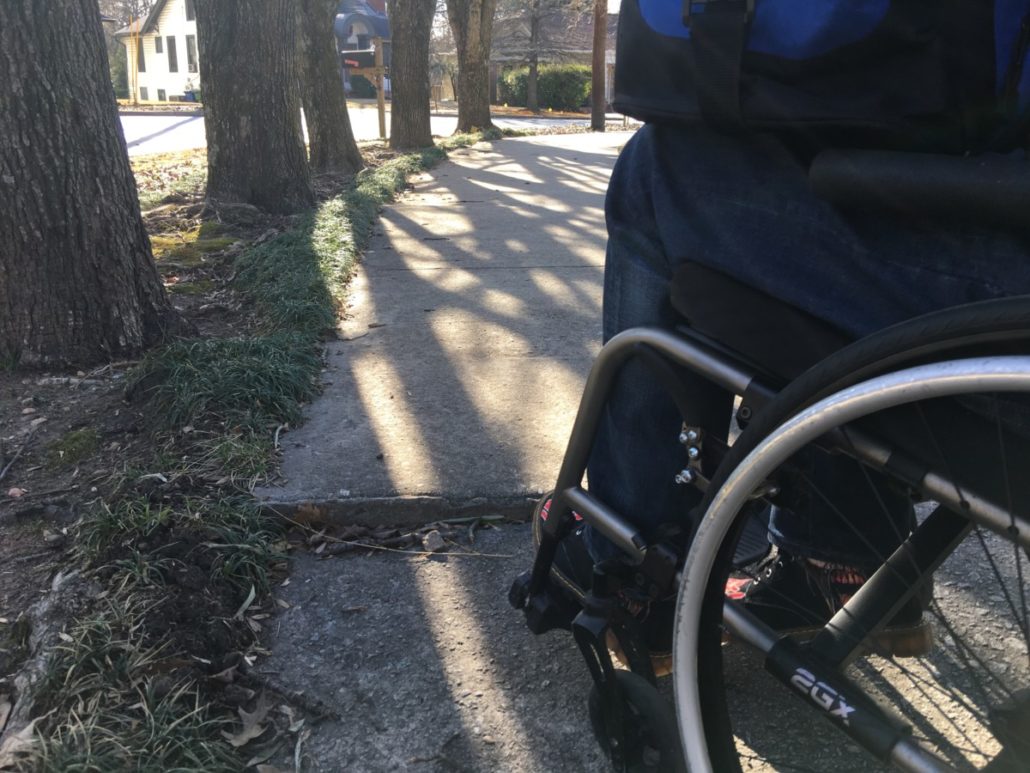 Uneven pavement prevents James Curtis and others from reaching destinations and enjoying the city. Curtis is a plaintiff in a lawsuit filed against Atlanta over unequal access to sidewalks. Credit: Special to SaportaReport 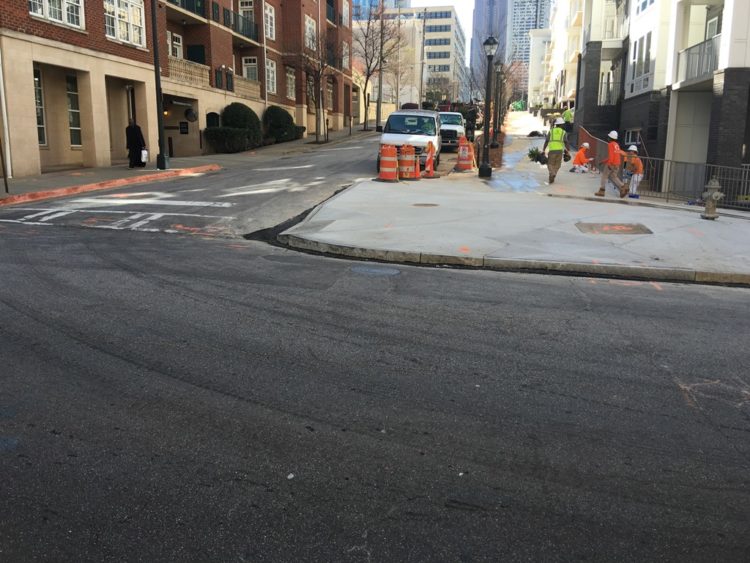