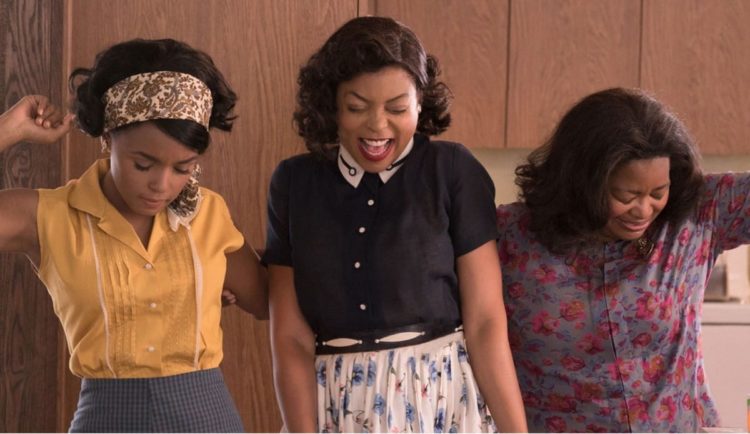 Despite all the bad stuff we experienced (reel and real), 2016 deserves respect for bringing so many important – and often little-known – true stories to the screen. Among them,  “Free State of Jones,” “Jackie,” “Loving,” “Hacksaw Ridge,” “Whiskey Tango Foxtrot,” “Sully,” “Snowden,” “Masterminds,” and “The Birth of a Nation.”

Now add to that list the very affecting (and effective) “Hidden Figures,” about some African-American math whizzes who were crucial to NASA in the early ‘60s.  Given that NASA was still stationed in Langley, Va., and Virginia still had strictly enforced segregation laws, this was not business as usual. 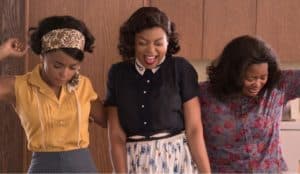 That they were women only ups the ante.

When we meet Katherine Johnson (Taraji P. Henson), Dorothy Vaughan (Octavia Spencer) and Mary Jackson (Janelle Monae), they are stuck on the side of the road.

Car trouble. A cop stops to see what’s going on – though not necessarily to help. If he’s not a good guy, they face a 16-mile walk to work or a long ride in the back of a bus. It looks a little dicey until the officer learns they work at NASA (from look on his face, it’s almost as if they’d told him they were flying pink elephants).

But bless his heart; he’s a huge fan of the space program. That these women are helping USA beat Russia in the space race impresses him to no end. And they know (or so they say) the astronauts. Personally.

The room where they work is marked “Colored Computers.” And their supervisor (Kirsten Dunst) treats them like, well, the help. She’s both condescending and slightly miffed that she even has to talk to “these “people. When Katherine is given a promotion and brought over to work at NASA’s control central, Dunst admonishes her, “We never had a colored in here before, Katherine. Don’t embarrass us.”

Katherine may be a genius, but she is still, in the eyes of her colleagues, colored. And a woman. Aside from her boss (Kevin Costner), no one bothers to talk to her (Dunst is dismissive, but at least she acknowledges her existence). Now that she’s got a better job, Katherine is routinely mistaken for a cleaning lady. She has her own separate but equal coffee pot. And should nature call, well, the only bathroom for “colored women” (Yes, that’s exactly how things were designated back then), is a half mile away, across the NASA campus.) 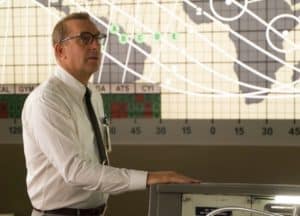 Kevin Costner portrays lead NASA engineer who fights racism in order to build a team that can launch a man into space orbit. Credit: blackfilm.com

The movie quietly yet forcefully expands its focus across the culture as a whole. Told that she could advance in the NASA program if she had a certain degree, Mary opts for night school. She hesitates before sitting down. “I don’t see a colored section,” she says, carefully. “Should I just take any seat?”

And again, yes, this is how it was, even with JFK in the White House and Bob Dylan in Greenwich Village.

In one of the film’s best exchanges, Dunst, hauteur intact, says to Katherine, “Despite what you may think, I have nothing against y’all.”

Katherine quietly, carefully replies, “I know. I know you probably believe that.”

The picture’s climactic duel between woman and machine is snatched right out of “Desk Set,” when Katharine Hepburn and her team of librarians took on an IBM computer the size of the Ritz. But  “Hidden Figures” is so satisfying, you won’t mind a bit.

I’m not sure how “Hidden Figures” will do on the awards circuit. The three stars all deserve Oscar consideration, as does Costner (a long shot for Best Supporting actor) and Dunst (ditto).

Actually, it would be wonderful if the movie as a whole got some recognition. It’s snagged a SAG nomination for Best Ensemble, which is the Screen Actor’s Guild version of Best Picture. But that may not happen in the rarified Oscar aura that tops off an awards season already satiated with true-story movies with African-American themes.

But never mind awards. “Hidden Figures” is smart, funny, beautifully acted and altogether entertaining. And essentially true. What else could you possibly want?