Editor’s note: This story has been updated with additional information from GDOT and corrects Todd Long’s title.

The financial consequences of last year’s transportation sales tax referendum are starting to appear in the coffers of local governments throughout Georgia. 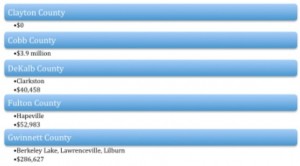 Five counties in metro Atlanta have received a total of $4.3 million in state funds for road maintenance. Click on the chart for a larger version. Credit: GDOT/David Pendered

The first round of checks to be issued for Fiscal Year 2014, which began July 1, has been released. In addition, this is the second year the state is using a new method to provide city and county governments with local assistance grants for transportation improvements. The state Legislature created the program in 2009 in an attempt to streamline the state’s previous method of providing money to local governments to repair and maintain roads.

The five counties that comprise the core of metro Atlanta have received a total of $4.3 million through the state’s new program of Local Maintenance and Improvement Grants.

The largest allocation, so far, was to Cobb County, which received $3.9 million. The smallest allocation was to Clayton County, which received zero dollars. Local governments have through December to submit their applications to share in a total of $122 million in local assistance grants, according to Todd Long, deputy commissioner of the Georgia Department of Transportation.

To receive the money under the new formula, the local governments, to date, have had to provide a total of an additional $860,000, compared to prior years. 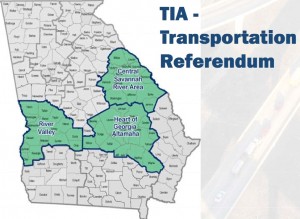 is the result of the state Legislature’s decision in 2009 to combine two previous programs – Local Assistance Road Program and State Aid.

The funding formula for the new program is controlled by GDOT’s director of planning, a position created by the Legislature in 2009 and appointed by the governor.

This year’s program provides $122 million, Long said. According to a GDOT report, the program’s criteria provide that:

In the past, the governor and Legislature provided a total of $40 million to $80 million a year for the two programs, according to a GDOT report. The money was distributed among the state’s 159 counties and more than 500 cities and towns.

The old LARP required no local funding. The money could be used only to pay for resurfacing existing roads. Local governments were required to pay to prepare roads for resurfacing.