An Atlanta nonprofit will be entering into a major partnership with Hilton Worldwide in an announcement that is to be made on Tuesday, Nov. 8.

The Atlanta-based Global Soap Project, a nonprofit organization that recovers and recycles soap from hotels that otherwise would send the product to landfills.

Hilton Worldwide expects that in its first of the partnership with the Global Sap Project that it will result in the donation of more than one million new 4-ounce bars of soap to people in need around the world.

Global Soap Project sorts, reprocesses and remolds used soap into new bars of soap, and then distributes them to people living in developing countries where there’s a great risk of sanitation and hygiene-related diseases.

In addition to the donation of soap, Hilton Worldwide also will invest $1.3 million over the next three years to help provide operational expertise to expand the scope of the Global Soap Project and increase its processing capabilities. 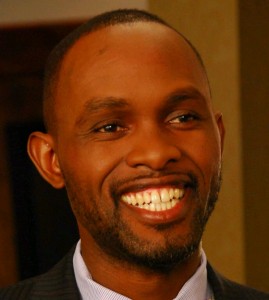 Hilton Worldwide will leverage its global supply chain and its expertise in the hospitality industry to develop a global system that can handle high volumes of soap at zero cost to hotel properties. Hilton also will assume a seat on the Global Soap Project’s board, where that representative can help develop the organization’s strategy and growth.

The partnership with the Global Soap Project is consistent with Hilton’s existing sustainability programs. The hotel chain has more than 1,300 hotel properties with more than 600,000 team members in 85 countries. 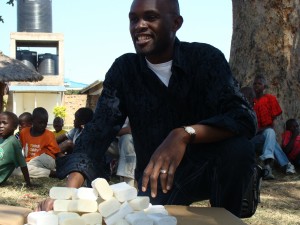 Derreck Kayongo in action distributing soap in communities in need of more sanitary conditions. (Photos from the Global Soap Project)

The Global Soap Project provides a relatively simple solution to some of the world’s most difficult health issues.

Hand washing with soap is among the most effective and inexpensive ways to prevent diarrheal diseases and pneumonia, which together are responsible for more than 3.5 million child deaths each year.

In contrast to North America, where more than two million partially used bars of soap are discarded at hotels every day, a lack of soap can be a barrier to hand washing at schools, community health clinics and refugee camps in developing countries, which rarely have soap or appropriate hand washing facilities.

“When living as a refugee in Kenya, I realized soap was hard to come by, even completely nonexistent sometimes,” said Derreck Kayongo, founder the Global Soap Project. “Even when available, those living on less than a dollar a day had to choose between buying food or soap. People were suffering from illness simply because they couldn’t wash their hands.”

Kayongo said the project is “thrilled” to work with Hilton Worldwide to create a “global, scalable model that will empower hotel properties to support vulnerable populations.”

The Global Soap Project was founded in 2009. Since then it has distributed more than 25 tons of soap to vulnerable communities in 20 countries on four continents.