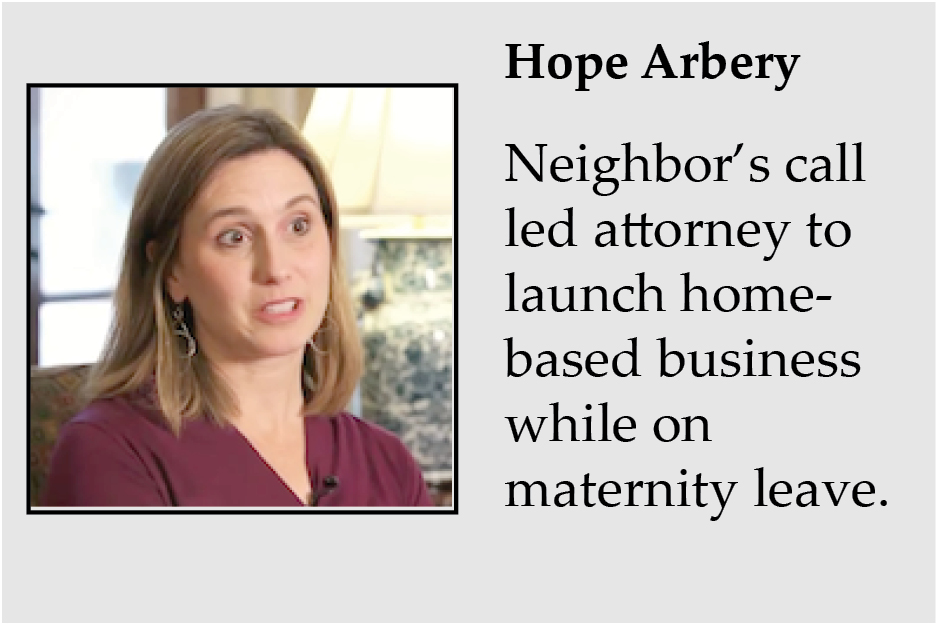 Hope Arbery was a young successful real estate attorney when she was assigned a case for which law school did not prepare her: how to balance the demands of a growing practice with her developing desire to stay home raising two young boys.

Deliberating the issue while at home on an extended break from the firm, Hope’s Moment occurred when her next door neighbor called, asking if Hope knew anyone who could help complete her commercial sewing project that was derailed after the neighbor broke her arm. It was a serendipitous call for both.

Turns out, Hope had been a state sewing champion in her childhood in Abingdon, Virginia, where her dad owns a sheep farm close to their house. Hope had put the needle and thread aside to pursue college and legal studies. Her neighbor’s call prompted Hope not only to get back in touch with her nearly forgotten passion for fabrics, but opened up a new career path that allowed her to stay home with her children.

As Hope helped her neighbor to complete her project, she told her of her childhood love for sewing. “Don’t tell your friends you can sew or your phone will not stop ringing,” her neighbor warned. “If you start sewing professionally, you’ll never want to work in an office again!”

As we prepare this week to celebrate Mother’s Day, we thought we’d take a Moment to feature a working mom. The National Economic Council reports women comprise 47 percent of the U.S. workforce and own 30 percent of all privately held U.S. small businesses – a figure that grew 44 percent from 1997 to 2007. By percentage, fewer women lost their jobs in the recent recession.

Hope, who used to have an office in a large Buckhead law firm with a secretary and a paralegal supporting her transactional real estate practice, soon found that her friends were stopping her in the grocery store to ask if she’d help them with home decorating projects. Discussing options with her husband Chris, who was also a lawyer at a large firm, Hope decided to take a leap of faith and open a sewing business in her basement. Eventually, interior designers began hiring her to complete their custom projects for their clients and Hope found she had a six-month backlog of projects.

Sewing has become a relatively diminished art in America. Decades ago, every home had a sewing machine and women knew how to operate them to mend and make clothes, pillows, curtains or recover a chair or sofa. As the service economy and options for young women in the workplace have exploded, the tradition of passing down skills such as sewing have waned to the point that a larger percentage of young women report they’ve never even picked up a needle and thread.

Hope found that her return to sewing was not just a creative exercise, it helped to sharpen her mathematical and mechanical skills while improving her ability to focus on one task for an extended period of time – a high contrast to the decreasing attention span that many Americans report as a result of continuous emailing and texting and other digital intrusions.

Having grown her business, Pleat Street, over the past 11 years and helping to beautify homes across the country through more than 6,000 projects, Hope now sees an opportunity to share this lost art with a new generation of young women – and men – who are finding the joy of working with with their hands on something more personally fulfilling than a smart phone. Her two boys have learned to sew and Hope has taught sewing skills to a younger generation of students in elementary schools.

“Not only are they able to develop a new skill, the students can improve the interior designs of their homes and point with pride to textile items they designed and made with their own hands,” Hope said. “I loved my career as a lawyer, but this work continues to give me the joy of knowing I’ve improved the environment of homes – and I’ve been able to be home when my boys come home from school.”

Next week in Moments: Milton Little, whose path to becoming president of United Way of Metro Atlanta began with a kiss.