In horrible shape, falling apart — and headed to the conference championship 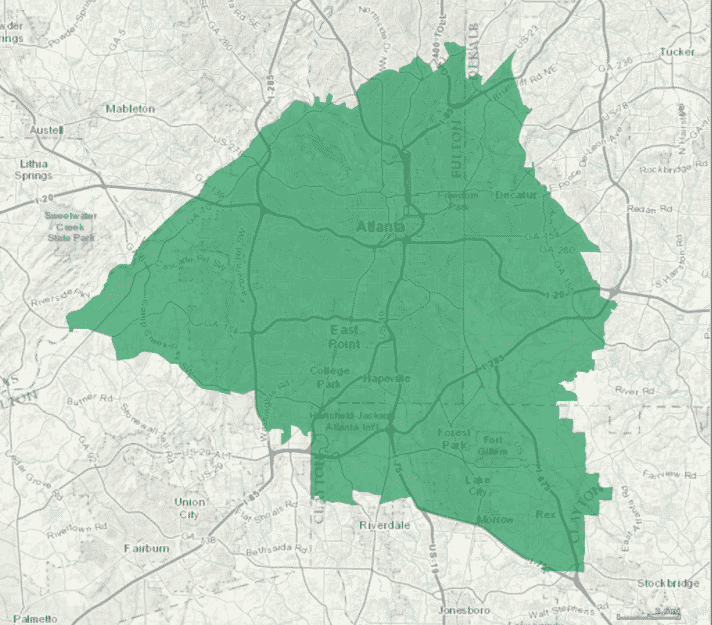 Our Town, always hungry to put itself on the map, suddenly finds itself hosting the Packers in the NFC Conference championship game and the subject of a Donald Trump tweet war. Henry Grady Nirvana, in a perverse, 21st Century way. 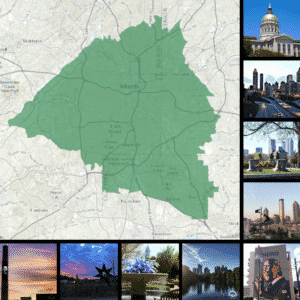 The 5th District that John Lewis represents in Congress contains the spiritual and economic spirit of metro Atlanta, as well as the core of state government. President-elect Donald Trump tweeted that the district is, “in horrible shape and falling apart (not to……mention crime infested).” Credit: Wikipedia, SaportaReport photo pick contributors, Britton Edwards

Trump’s weekend side-slap at Rep. John Lewis’ 5th Congressional District has unleashed a torrent of civic pride on social media. Whether it was appropriate for Lewis to say Trump wasn’t a “legitimate” president, or smart for the president-elect to lash back at a revered civil rights figure right before the King holiday and his own inauguration, the tweets and Matt Ryan’s arm have worked wonders on the local psyche.

Not that it was intended that way. Trump’s description of the 5th District — “in horrible shape and falling apart (not to mention crime infested)” — and his general alarm over “the burning and crime-invested inner cities of the U.S.” evokes Tex McIver’s story of how he mistook some men hanging around outside a downtown Atlanta homeless shelter late on a Saturday night for Black Lives Matter protesters, and asked his wife for the revolver in the glove compartment of their van. It’s less about a place in either case, and more about a delusional sense of racial anxiety, or the exploitation of it, and what might ultimately come about as a result of it.

In a simpler time, something called the “inner city” could be located as the epicenter of the country’s biggest social problems. As we’ve noted before, a number of the worst cases of late 20th Century urban blight have become upscale and gentrified.

Not all the 5th District, which in its latest configuration includes portions of DeKalb and Clayton counties as well as most of the City of Atlanta, has grown more prosperous. The Instagram pictures of Ponce City Market and Centennial Park only tell part of the story. But the district is on much more solid ground, as a center for business, philanthropy and education, than it was when Lewis was elected to his first term in 1986. It isn’t burning and it isn’t falling apart, but on many streets, Google Fiber installations are way behind schedule.

These days, poverty and crime infest the edges of cities, and rural areas have their share of social despair. The United States Donald Trump will govern come this Friday isn’t a country where our troubles fit so easily into the old categories.

It’s been suggested that our civic leader extend an olive branch to Trump in an effort to smooth things over, but our time would be better spent worrying about Julio Jones’ toe. Trump doesn’t seem to have much trouble getting over these things. When he was working on a real estate deal in Atlanta a few years ago he loved the place. He’ll have much more to worry about in a very short time, anyway. 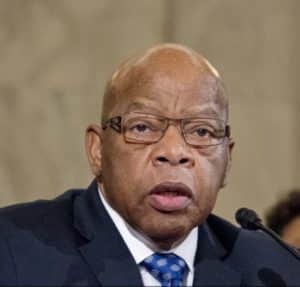 Trump has on several occasions distracted the media from more important stories by tweeting about the passing controversies of the hour. The question is whether that has been intentional or coincidental.

The tweets in response to Lewis’ televised comments may have quashed some of the questions that could have been raised about Trump’s “insurance for everybody” guarantee, but that might have been preferable to getting into a public spat like this at a time when so much else is at stake for his presidency.

It’s easy to repeat the particulars of Lewis’ civil rights sainthood and miss the steely instincts of a politician who had one enormous challenge to overcome in winning his seat — upsetting Julian Bond — and has insured his longevity since then with much attention to his district.

Lewis also has an eye for the jugular, and no hesitation in using his reputation much as, at one time, he might have used his body. That makes him someone the president-elect might want to avoid tweeting about.

Amazon, in the meanwhile, has sold out of Lewis’ biography since the weekend.