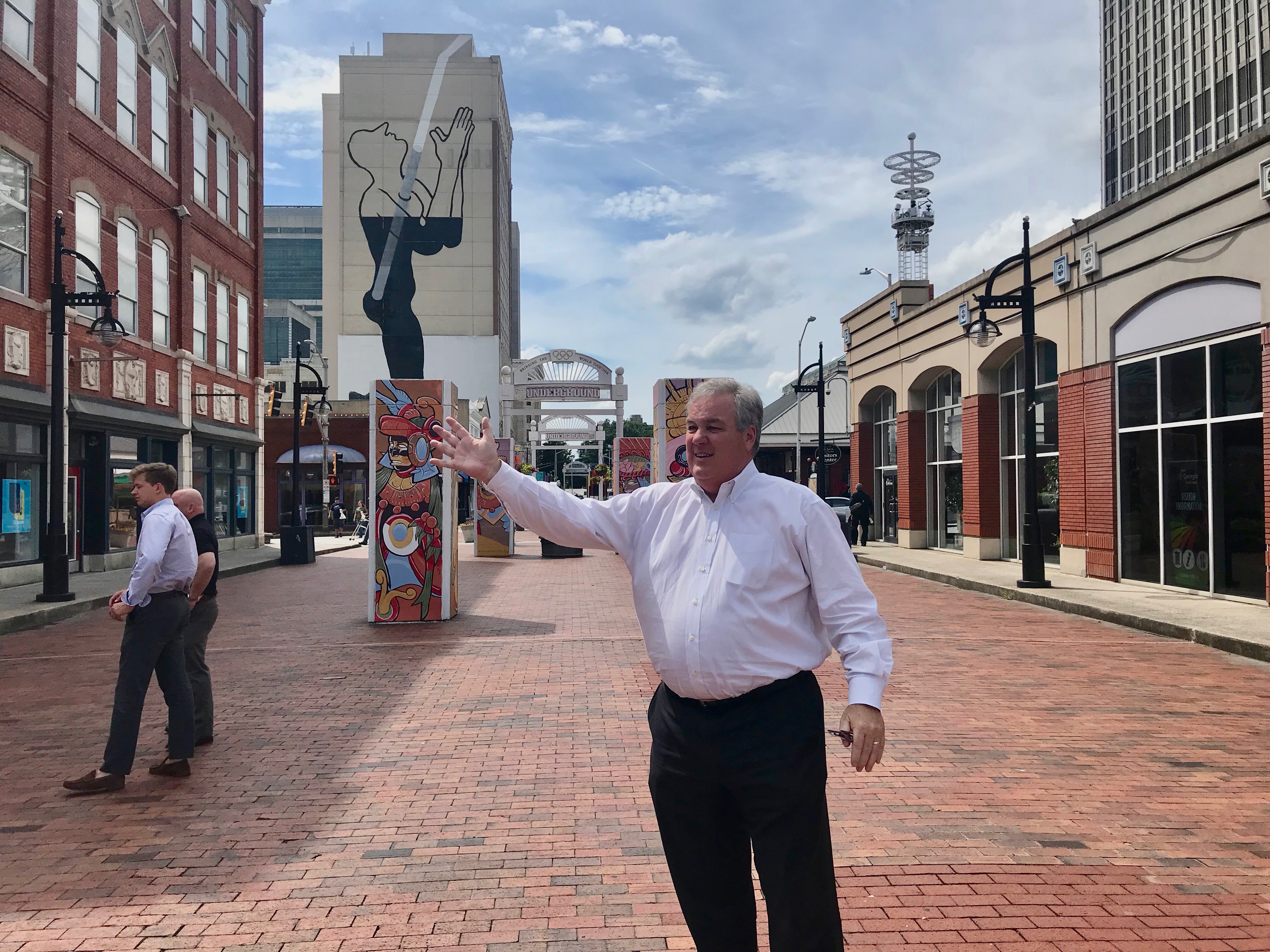 A $450 million plan to redevelop Underground Atlanta is expected to take off in 2020 with the construction of a new hotel, apartments and an entertainment venue.

Smith said the four-block development has signed several letters of intent with other developers and tenants (for residential and retail spaces), and those deals should close within the next 120 days. 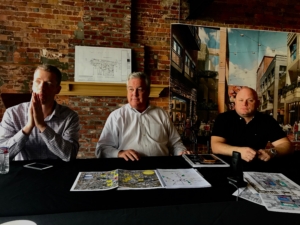 WRS closed on its purchase of Underground from the city of Atlanta for $35 million in March 2017. During those two years, there has been little evidence of activity on the site with the exception of Masquerade moving to Kenny’s Alley in Underground. There even was speculation that the entire development was for sale, which Smith strongly denied.

Confusion may have arisen when WRS was entertaining proposals to sell the air-rights to several development sites on the project. WRS, which specializes in retail development, will continue to own all the land and manage the spaces for the restaurants, shops and entertainment venues that will be on the lower floors and at street level.

At a quarterly community meeting on June 25 at Underground, Smith thanked nearby residents and interested citizens for their patience over the past two years.

“What we have been doing are things you just can’t see. Underground had been neglected for years and years,” Smith said. It has taken this long to stabilize the property by reroofing portions of the older buildings, eradicating mold, removing drywall and bringing the buildings up to code.

“We want it to look like it did 100 years ago,” Smith said. “We are just now prepared to start coming in and getting tenants. Everything we’ve been trying to do is different. We want to get rid of the mall feeling in this whole development.”

On the two blocks south of Alabama Street, Smith said the goal will be to have “eclectic” local retail tenants and restaurants – describing them as mom-and-pops and unique spots that will attract tourists and residents. 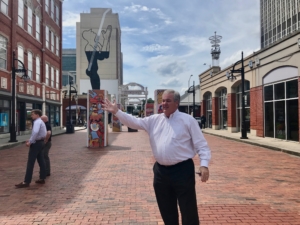 On the two blocks north of Alabama Street, the plan is to have national and regional tenants that will serve the retail needs of the development as well as people nearby. Smith said 19,000 people live within a mile of Underground. And the property is adjacent to the cluster of city, county, state and federal government offices as well as Georgia State University.

“What we are building is a community, and we want people to be able to get fresh foods, meats, vegetables and milk,” said Smith, who added they have moved away from having one “big box” retailer or grocery store in favor of leasing out smaller spaces.

Smith said they are in negotiations with one major retailer that would take 20,000 square feet along Wall Street at Central. WRS also is in negotiations to sell the air-rights on top of that retail space to an undisclosed developer that would build about 270 residential units.

The YOTEL Hotel concept is a new-to-market hotel brand. The United Kingdom-based flag blends “comfort and convenience into compact spaces.” It will have a mixture of smaller rooms that it calls “cabins” and larger “pads” for longer stays to accommodate unique needs of travelers.

The hotel, which will be 12 to 15 stories high, will feature designed open spaces with gyms, restaurants, bars and outdoor terraces for co-working, informal meetings and relaxing.

“We were looking for something different for Underground, not the normal flag hotel,” said Smith, who will have an ownership interest in the Underground property. The plan is to break ground 2020 with a goal of opening in the fall of 2022.

Prestwick and WRS also hope to begin construction on the building that will replace the Exchange in 2020. “There’s absolutely nothing historic about that building that’s coming down,” Smith said.

Of the 130 units, 80 percent will be affordable with rents ranging from about $750 to $1,000 a month for one-bedroom and two-bedroom units respectively. Rents for the affordable units will be at 60 percent of the area median income (AMI) or below. The remaining 20 percent will be market-rate housing.

Chuck Young, a partner of Prestwick, said a $3.6 million tax allocation district grant from Invest Atlanta and tax credit financing from the Georgia Department of Community Affairs was critical to the project.

“We like to make sure our families can live near mass transit so you don’t have to own a car,” Young said. Prestwick has a track record on building affordable housing near MARTA stations so residents can have access to  jobs.

Originally Prestwick had planned to build on top of the MARTA and CSX rail tracks on the block across Alabama Street. “With construction costs, now it’s harder and harder to deliver affordable housing,” said Young, who added the project’s affordability will remain for at least 15 years and likely will be renewed..

Smith said it would have cost about $22 million to build over the rail tracks, a much more expensive effort than the $5 million he had initially expected to spend to bridge over that gulch. 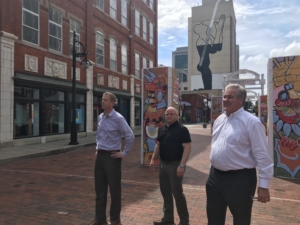 Brian Trapp, a professional drag queen and performer who goes by the stage name Phoenix and who competed on RuPaul’s Drag Race, will lead the cabaret, Young said.

Young said he was drawn to downtown because of the droves of visitors. “It’s a great central location,” he said.

The addition of Future to the tenant mix will help the project be inclusive.

“Originally, when we bought Underground … we thought where it was positioned, it could be all things to all people,” Smith said. “We feel this community will be something where everybody feels comfortable.”

When completed, Underground will have 280,000 to 300,000 square feet of retail, about 630 residential units, 320 hotel rooms and 88,855 square feet of office space. The density of the project has been scaled down, but Smith still expects that as many as 1,500 people eventually will live at Underground.

Smith said he hasn’t identified a development partner for the key site at Peachtree and Upper Alabama streets across from the Five Points MARTA Station, and he is in no hurry to do so. He expects it eventually will be a market-rate residential high rise with as many as 300 apartments.

Another significant shift is parking. At one point, Smith had been looking to add 2,000 parking spaces, but that has been significantly scaled back.

“We are going to add the bare minimum of parking that we need for the development,” Smith said. “We have the most fortunate piece of property in all of Atlanta because of the Five Points MARTA Station.”

As he was taking visitors on a tour of the now-closed section of Underground, Smith was enthusiastic about the potential of the project.

Before Underground closed, it had nearly 10 million people coming to the complex each year, he said.

“You would see the disappointment of people on people’s faces when they came down here. There was nothing exciting about it,” Smith said. “We want Underground to be unique and vibrant. We want this to be a community.” 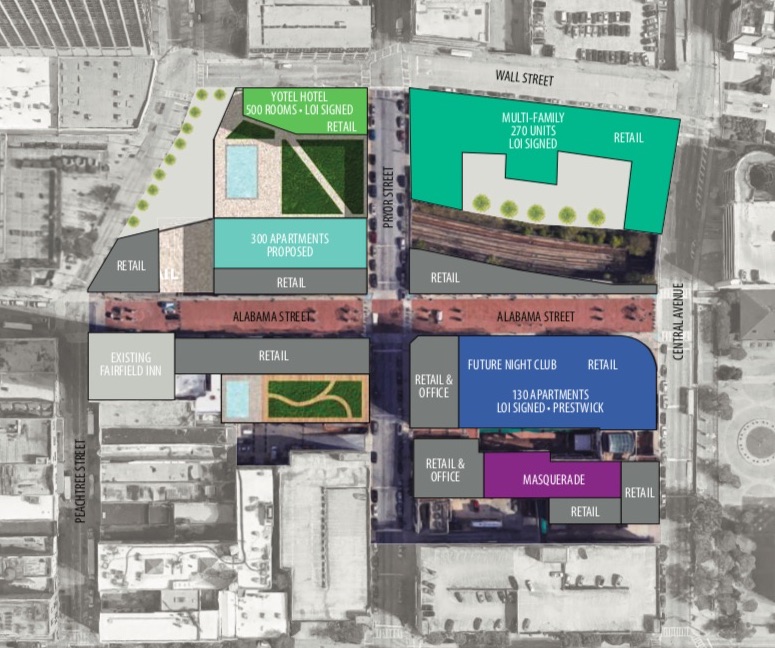