The combined insight of two new reports sheds an interesting perspective on the housing market in metro Atlanta. The question remains: Who’s buying? 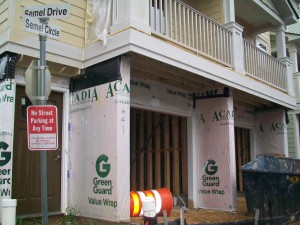 The housing market has rebounded to the point that developers have moved ahead with City Park, located off 26th Street in Buckhead. File/Credit: David Pendered

The most recent Beige Book from the Federal Reserve described home sales as “strong” in the Atlanta district, which covers portions of the Deep South.

In a report specific to metro Atlanta, Bloomberg news reported Thursday that the Blackstone Group has purchased 1,400 homes in the Atlanta area. The transaction is described as the largest bulk sale in the homes-to-lease industry – a business built on folks who don’t want to buy a home or can’t.

The Beige Book was released April 17. The report is published eight times a year and presents an overall summary of the current economy in the nation’s 12 bank districts.

The overall picture of the Atlanta district shows moderate growth and offers a generally optimistic outlook for the overall economy. That’s the view portrayed by key business leaders, local economists and other sources who provide such information in Georgia, Alabama and Florida, plus parts of Tennessee, Louisiana and Mississippi.

Regarding real estate and construction, the Beige Book reports that, “housing markets across the region continued to improve.” Further: “Overall, the outlook for existing home sales growth over the next several months remained positive.”

The general picture is of an improving housing sector. Existing home inventories are contracting to the point that sales are restrained. Prices have risen moderately compared to a year ago.

The Atlanta segment is relatively taciturn. But a few zingers are nestled in the real estate section, including these two:

The Blackstone purchase that Bloomberg reported Thursday highlights a housing sector in the Atlanta area that’s more dour than that portrayed in the Beige Book.

The bulk purchase of rental houses by a leading private equity firm speaks to the impact of a recession that not only knocked homeowners out of their dwellings through foreclosures, but also left some with credit so tattered that they cannot qualify for a unit in some of Atlanta rental apartment communities. Some have turned to rental houses as a place where they can find a roof.

Blackstone paid more than $100 million for the 1,400 units, according to the Bloomberg report. The news story was sourced, in part, to, “two people familiar with the transaction, who asked not to be identified because the deal was private.”

The story said about 16 percent of the units is Section 8 housing, citing another unidentified source. Section 8 is the federal program that helps provide housing for people with low to moderate incomes.

If 16 percent of the units are subsidized, that means 84 percent of them are market rate. Consquently, a significant portion of rental homes in metro Atlanta may now be viewed as strictly a sticks-and-bricks investment by a company that has to provide returns to investors. The policy question facing local governments may involve issues over what type of landlords these institutional investors will be in the rental housing market.

The question also remains of exactly how the overhang of houses in Atlanta is being absorbed. The Beige Book shows the market demand for houses is picking up. The Bloomberg report shows that a significant portion of houses are being purchased as investments in a market segment Bloomberg describes as a fledgling institutional asset class.

Previous Article
‘To the Wonder’ – twirling to nowhere
Next Article
Drought’s grip easing, but 2,000 azaleas died at one home in Rome because of dry conditions