As a crowd of 500 people gathered for the ground-breaking of the Atlanta BeltLine’s Westside Trail – a three-mile corridor that has received $43 million and will take two years to build.

While giving the invocation, Gerald Durley, pastor emeritus of Providence Baptist Church, summed up the sentiment of many in the audience.

“This is the day that God has set aside for this part of town,” Durley said with a booming voice. 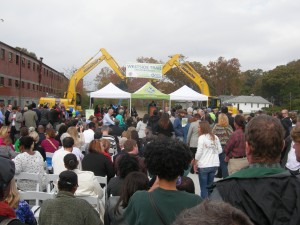 The ground-breaking was held at what will become a key entry point to Westside Trail – at Ailene Avenue and Catherine Streets right next to where the Urban Farm will be developed.

Angel Poventud, a resident of Adair Park who lives in a house that is sandwiched between the BeltLine and the historic neighborhood park for which the community is named, was impressed by the turnout.

As far as he knows, there hasn’t been a gathering of 500 people for a special event along the BeltLine in recent memory.

Sarah Kennedy and Nancy Rigby of the James M. Cox Foundation are joyful at the event

“This is the largest infrastructure investment above ground in this side of Atlanta in 30 years, and it’s the largest expansion of the BeltLine ,” Atlanta Mayor Kasim Reed.

Speaking directly to Fulton Commissioner Darnell, Reed said the Westside Trail was proof that the BeltLine project would serve all sections of the city. It is a perfect counter balance to the 2.5 mile Eastside Trail, which opened a couple of years ago.

“So Commissioner Darnell, today we are headed to the Westside,” the mayor said. “Today we are making a $43 million investment in that promise.”

As he spoke, a MARTA train passed by in the background leaving the West End Station.

“I love that theme music of trains in the background,” Reed said. “Transit is coming to the BeltLine.”

Reed also thanked the philanthropic community for raising $10 million to help the city qualify for the $18 million federal grant.

Jamie Kennedy, son of Cox Enterprises Chairman Jim Kennedy, spoke on behalf of his family and the company. As someone who lives along the Eastside Trail, Kennedy said the BeltLine provides an opportunity for Atlantans to get out of their cars and walk.

Atlanta BeltLine CEO Paul Morris said the three-mile trail would unite 10 neighborhoods that had been divided by an industrial rail line.

“We can hardly wait to get started,” Morris said, adding that the BeltLine will then look to extend the trail to the south in months to come so they can begin to close the loop. The city already owns a majority of the right-of-way along the 22-mile corridor.

Doug Hooker, executive director of the Atlanta Regional Commission, said the BeltLine and the city are the heart of the region. In addition to connecting neighborhoods, Hooker said the BeltLine is becoming its own community uniting all the people who use it.

“It’s amazing how people have come together around the BeltLine,” Hooker said. “So goes Atlanta, so goes metro Atlanta.”

A couple of controversial elements of the Westside Trail do exist.

First, the trail will not be on its own right-of-way as it goes through the West End neighborhood – using instead existing sidewalks that are doubling as multi-use paths. The railroad right-of-way is being set aside for transit, if and when there is money to build that transit line.

Also for that corridor to be wide enough to include both transit and a multi-use trail, the city would have to acquire several industrial buildings that are currently being used.

The second major short-coming with the current plan centers around the plans for how the Urban Farm will connect with the trail and the future transit corridor.

As currently planned, a narrow row of large attractive trees that serve as a retaining wall for the grade difference between the farm and the transit corridor are supposed to be cut down. The BeltLine will then need to build a retaining wall to keep that ridge in place, adding substantially to the cost of the project.

Unfortunately, Morris, a landscape architect who could understand what’s at stake if he had an open mind, was not willing on Wednesday to see the situation for himself and hear directly from residents in the community about their ideas and concerns.

All Morris would say is that the BeltLine would be planting many trees along the corridor.

I continue to believe that we will never live up to our full potential as a city if we are not willing to listen to constructive ideas of how to improve the plans for our public spaces and projects.

Yet Atlanta seems to have lost the art of embracing public involvement and community input – policies that the late Atlanta Mayor Maynard Jackson, a populist and activist at heart, had tried to instill at City Hall 40 years ago.