Thousands of Atlantans, literally of every walk of life, participated in the 28th annual Hunger Walk/Run — a signature event of the Atlanta Community Food Bank. 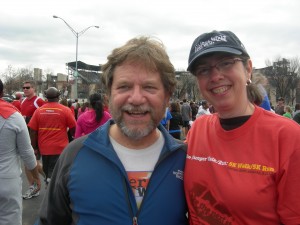 Bill and Haquiqa Bolling before the Hunger Walk

As people gathered to either walk or run the five kilometer course, a band played on the stage while dozens danced and cheered.

All registered walkers were given an orange-red T-shirt commemorating the 2012 Hunger Walk. Other booths were selling food and drinks. And numerous companies and organizations had tents where their teams gathered on a glorious afternoon. 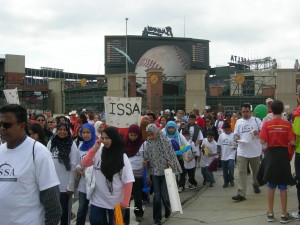 Overseeing the entire event was Bill Bolling, founder and executive director of the Atlanta Community Food Bank, someone I am fortunate to say is one of my closest friends as well as my adopted brother.

On Sunday morning, Bill invited me to join him and his wonderful wife, Haquiqa, on the Hunger Walk. 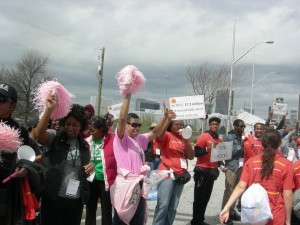 People cheer to walkers along the way

Trust me. There’s no one better to share that experience than with the Bollings.

Before the walk, several people came up to Bill — a true celebrity at the event — asking if they could get their picture made with him. He happily obliged — clearly enjoying the spirit of the event. 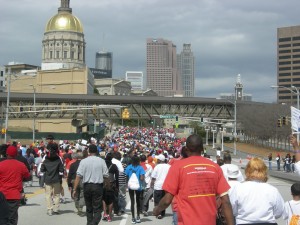 As we started the walk, Bill was especially pleased by the turnout of Muslims — who have increasingly become strong supporters of the Hunger Walk.

“We put the Muslims and Jews in the same tent,” said Bill, who was obviously pleased that he could use the Hunger Walk as a way to bring diverse folks together. “It’s the second year we’ve done that.” 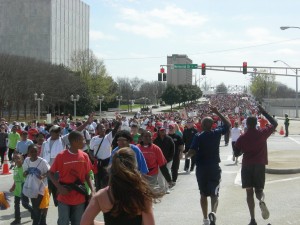 As they head to finish line, runners pass by walkers

As we started walking, Haquiqa accurately observed that the Hunger Walk probably has one of the most diverse crowd that gathers for an annual event in Atlanta. It was not just black and white, young and old — it was ethnically diverse with several groups speaking different languages as they walked.

Bill said that every year about 150 Koreans head up the effort of cleaning up every piece of trash at the gathering site. It’s a job they volunteer for after every Hunger Walk. 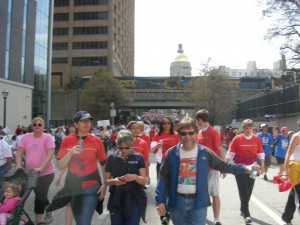 Bill and Haquiqa are joined by colleagues along the walk

All along the way, Bill is repeatedly stopped by friends and fans who appreciate all he’s done for the Atlanta Community Food Bank. And that’s the word of the day — community. Bill has managed to turn a food bank into a way to build a stronger community.

The Hunger Walk started in 1984 in Piedmont Park. Haquiqa told me that the first couple of walks were 20-mile long that lasted most of the day. Again, it was a community building event as churches and homes opened up their doors to walkers along the way. 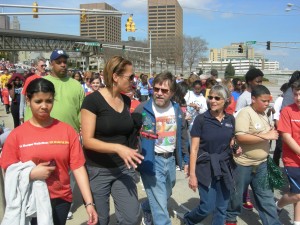 After a couple of years, Haquiqa said they realized they could raise just as much money if the Hunger Walk were shorter. Over the years, the distance of the walk has been cut back — while the number of participants has grown.

On Sunday, the estimate was that 14,000 people participated in either the walk or the run. Bill told me that the Hunger Walk will raise more than $500,000 — proceeds that are shared among the various nonprofits that provide food for the needy. 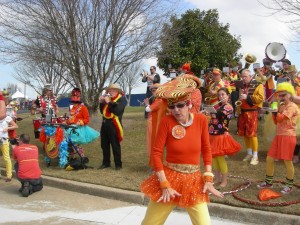 Various performers entertain walkers as they stroll by

As we walk, several people are holding up signs reminding us the central purpose of why we are participating. One woman’s sign says: “In 2011, 17.2 million U.S. households were food insecure.”

All along the way, people are cheering us on — often waving pompoms — contributing to the celebratory spirit of the walk. Dancers, musicians, jugglers and other entertainers delight the walkers.

Even the police officers who have been hired to help close the streets as we walk by are catching the spirit. One female police officer high fives groups of children as they pass by.

It is a day for bonding — on so many levels. Everyone is pounding the same pavement for a common purpose. And as we walk, we’re experiencing the best that Atlanta has to offer.

We literally have taken over the streets as we wind our way from Turner Stadium over to Piedmont Avenue around Georgia State University’s campus — only a block away from Grady Hospital. We turn left on Auburn Avenue and then left again on Courtland Street. We go around the state capitol as we then head back to the Turner Field parking lot.

At the finish line, Bill jokingly holds his two hands — either displaying peace signs or victory.

Actually it was both. 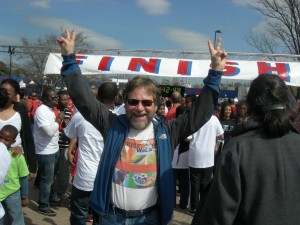