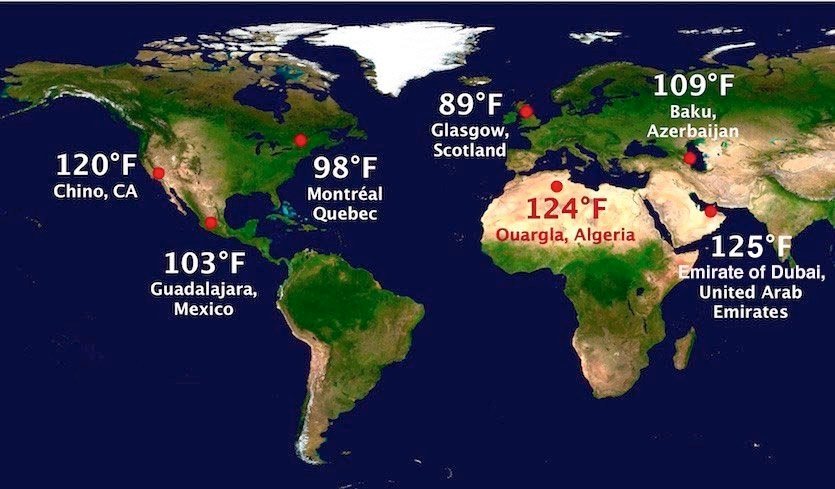 Image from Weather Underground A sampling of all-time high temperatures reported around the world in 2018 thus far, rounded to the nearest degree Fahrenheit. Most of these were set in late June and early July (see details below). The reading of 51.3°C (124.3°F) at Ouargla, Algeria, is the highest reliably measured temperature on record for Africa. Background image credit: NASA Earth Observatory.

In South Korea this summer, mosquitoes are dying from the heat and BMWs have been banned because they keep catching fire. In North Korea, meanwhile, the crops are failing.

These are splinters of what has been the biggest story in the world this year, just about everywhere but the United States. Directly and indirectly, weather has driven the news, and the weather’s been hot.

It isn’t entirely clear why the mechanical defect in some of BMW’s diesel models only causes them to catch fire in South Korea, but as the hottest summer in the nation’s history has progressed, the number of BMW fires — 40 at last count — has soared. The collapse of the mosquito population has reduced the risk of Japanese encephalitis, but at least 42 people have died from the heat, which reached 103 degrees in Seoul. There aren’t regular weather reports from the other side of the border, but if unofficial reports of major crop failures are true, this could be a major factor in the resolution of relations with North Korea.

So it has been across much of the globe. Hundreds have been killed and millions evacuated by flooding in Japan and southern India. Forest fires have raged across Asia and Europe all the way beyond the Arctic Circle. British Columbia, known for its pristine forests and streams, is in the middle of an air quality emergency due to hundreds of fires. Droughts have had a severe impact on crop yields in China, Central Asia, Africa, Europe and South America. Even climate scientists who have predicted them have expressed surprise at the number of extreme weather events this year.

The United States has seen its share of fire and floods this summer, but the heat waves and thunderstorms touched off by presidential tweets take precedence in the news. The two parties have very different positions on climate change and what can be done about it, but neither is going to make the issue the centerpiece of the crucial mid-term election this fall.

That’s not the case elsewhere. Australian Prime Minister Malcolm Turnbull was forced Monday to abandon the plan he had crafted to bring the country in line with the Paris Climate Agreement under pressure from conservatives in his party, putting his ability to hold on to power in doubt. There’s no more consensus on climate change policy in Australia than there is here, but in that country it’s a much more vital question.

That can go on just so much longer, and then either the weather will moderate or its disastrous effects will force their way into the middle of the U.S. political arena. For years, whenever there’s been a major hurricane or record heatwave, scientists have taken care to note the difficulty of linking a single event to a global pattern. Scientists now say they feel more confident in correlating events like those this summer to longer climate patterns.

The New York Times Sunday Magazine recently devoted an entire edition to a a single story by Nathaniel Rich which makes the case that the nation had the chance to avert global catastrophe back in the 1980s but didn’t act when it would have mattered. That has infuriated scientists and climate activists, who have accused the author of giving polluters an easy out with the argument that nothing meaningful can now be done about the changes in progress.

This won’t be the last story of its kind, stories that attempt to locate some tipping point in the past when things might have worked out another way. But politics is always about what to do next.

Although President Trump announced the U.S. withdrawal from the Paris Climate Agreement more than a year ago, the agreement doesn’t go into effect until 2020. In the meanwhile, the U.S. has done relatively well in reducing carbon dioxide emissions, partly because of the conversion from coal-fired power plants to natural gas, and partly because warmer winters have reduced the amount of fuel used in home heating. Yet the administration seems bent on turning back progress, announcing a plan this week that let each state set emission levels for coal-fired plants.

This is predicted to be only the fourth hottest year on record, but it has broken a host of records, including the highest single-day low (June 25 at Qarayyat, Oman, when the temperature never got below 108.7) the highest temperature ever recorded on the continent of Africa, (124.2 at Ouargla, Algeria) and local all-time high temperatures in cities around the world. Climate change is becoming less and less a question of whether it’s real or what caused it, and more and more a question of what we’re going to do about it now that it’s here.