In Atlanta, it’s the ‘Atlanta Way;’ In Seattle, it’s the ‘Seattle Process’

It’s a process that painstakingly seeks to find areas of consensus on issues before tackling areas of disagreements and a process that tries to be inclusive before a decision is reached – even if it seems to take forever.

According to former Seattle Mayor Norm Rice, the Seattle Process had a three-pronged framework that worked when he was in office from 1990 to 1998. Rice outlined the process during a panel discussion Wednesday in front of about 110 metro Atlanta leaders visiting Seattle on the organization’s 15th annual LINK trip.

First, there needs to be social equity and not drive a wedge between those who have and those who don’t.

Second, there needs to be environmental sensitivities as the city seeks to become more sustainable.

And third, there has to be the opportunity to advance economic well-being.

“It’s a framework I still believe in,” Rice said, adding that it includes bringing the community together, engaging citizens and welcoming dialogue.

But that process can take years, if not decades.

“We like process around here,” said Grant Degginger, a former mayor of the nearby City of Bellevue who still serves on the city council. “Sometimes we process for a long time.” 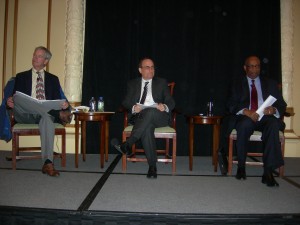 Seattle attorney Tayloe Washburn, a former chairman of the Greater Seattle Chamber of Commerce, told Atlantans how enriching it was for him to go on similar city visits to learn about how other metro areas are addressing their issues.

“We’ve been all over the world,” he said. “I always come back feeling a little droopy. Many other cities make decisions really efficiently.”

One example he mentioned was the extremely volatile issue of whether to build a $4.2 billion, 1.7 mile tunnel to replace an earthquake-damaged viaduct that currently separates downtown from the Puget Sound waterfront.

After years of the “Seattle Process,” consensus for a tunnel was reached among business and union leaders as well as the state and local government officials.

Then at the last out of the ninth inning, Seattle elected a new mayor — Mike McGinn, who opposed the tunnel project on several fronts.

Clearly, there has been a disconnect between the new mayor and the city’s power structure on how to move forward on infrastructure and transportation investments in the city.

When asked whether the “Seattle Process” works, the panelists danced around the question without really answering it.

Mayor Rice offered a telling comment: “If you are designing the process to get you the answer, you probably have the wrong process. You have got to design the process to develop consensus.”

And for Seattle, that means making decisions that are socially equitable, environmentally sustainable and provide economic opportunity, he reiterated.

After half a day in Seattle, I see a striking difference between Seattle and Atlanta.

Unfortunately there are drawbacks to both approaches.

A metro area should not get so lost in the process that it can’t move forward. But also a community must not sacrifice consensus building among a broad-based group of people just so a decision can be reached.