In Birmingham, a rare look at how the hand fits into the glove 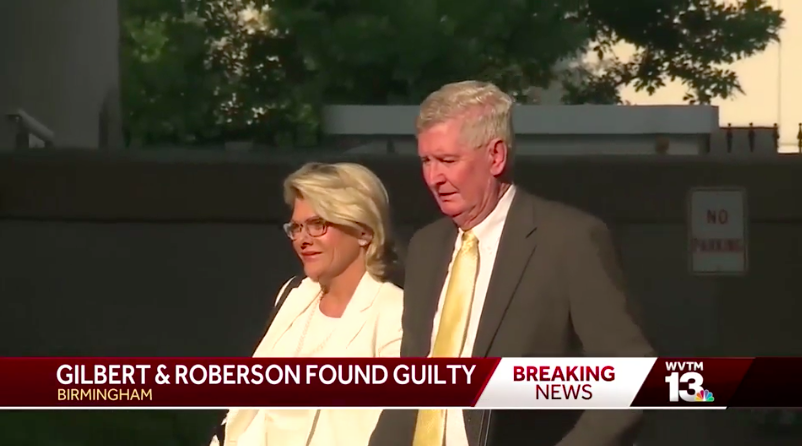 Goodness knows we have enough political entertainment here in Georgia, with one of our legislators biting a fake penis and yanking down his britches on TV, and dueling endorsements from the president and the governor. But something important has been happening in Birmingham.

For the past four weeks, the Hugo L. Black Federal Courthouse has been the scene for an extraordinarily detailed demonstration of how the hand fits into the glove. On Friday, a jury found Joel Gilbert, a partner in the powerful law firm of Balch & Bingham, and David Roberson, chief lobbyist for the Drummond Co., guilty on all six counts involving the bribery of a state legislator. Charges against another Balch lawyer, Steven McKinney, were dropped last week before the trial went to the the jury.

This in itself was an earthquake, in a state where the “Big Mules” of Birmingham have long held sway. But in the unfolding of their case, federal prosecutors traced a much broader web of corruption, stretching from the longtime head of the local NAACP to the governor’s office.

That governor, Robert Bentley, has since resigned and pleaded guilty to misdemeanor campaign finance charges. The powerful former House speaker, Mike Hubbard, is now in his second year out of jail while appealing a four-year corruption sentence, raising suspicions  about the Alabama Criminal Court of Appeals. The Birmingham trial amounted to a long examination of the political culture which spawned this ethical train wreck.

The defendants were charged with bribing former state Rep. Oliver Robinson to fight an effort by the Environmental Protection Agency to have the 35th Avenue Superfund site in his district expanded and put on the National Priority List. Robinson has already pleaded guilty to bribery charges.

Back in the day, smokestacks like those at the Drummond coke plant belched out tons of pollutants like arsenic and lead, which settled into the ground of north Birmingham and neighboring Tarrant and affected the health of the residents of these mostly black communities. The EPA’s decision to move ahead with a cleanup meant Drummond could be billed tens of millions of dollars and face liability exposure, so it turned to Balch & Bingham to help make the problem go away.

Or, as the company put it in its statement after the verdict Friday, “When an environmentalist group raised allegations regarding our operations in the Birmingham area, Drummond responded by hiring one of Alabama’s most well-respected environmental law firms.”

This is much like saying, “When Little Red Riding Hood got lost, we responded by hiring one of the woods’ most well-respected child care professionals, the Wolf.” Balch & Bingham has a reputation as a fierce defender of clients such as Alabama Power in environmental cases.

The team recruited Robinson, who not only opposed the EPA decision on the premise that it would hurt property values in his district, but advised his constituents not to allow their soil to be tested and allegedly recruited community leaders like NAACP President Hezekiah Jackson to get on board with the effort.

Meanwhile, as some of the participants later testified, Gilbert and Roberson were winning Bentley’s support and whipping state environmental officials into line so as to present a solid anti-EPA front. It doesn’t take much to gin up anti-EPA sentiment among lawmakers, so they got a joint resolution out of the legislature. State Attorney General (later U.S. senator) Luther Strange wrote EPA opposing the move, not long before receiving a contribution from Drummond.

Trey Glenn, who acted as a consultant in the effort, has since been appointed EPA’s regional administrator by President Trump.

Some of what the law firm and its client did was perfectly legal, some was barely legal, and some, the jury decided last week, was criminal. What’s fascinating is the way the fine lines that separate these categories got crossed. There’s a hint of Charles Dickens in the way moral collapse played out across the social, racial and political spectrum in this case.

Things have gotten out of hand in Alabama, but they don’t get done a lot differently elsewhere. A lot of dicey business just gets done, without the intense scrutiny of a lengthy federal investigation and trial.

Incidentally, while Drummond defended its executive Roberson in its statement and pointed the finger at its lawyers, Balch & Bingham’s managing partner, Stan Blanton, said in a statement that although the firm wasn’t a party to the case and Gilbert was no longer with the firm, he and his colleagues were “deeply disappointed in any conduct that does not adhere to our commitment to the rule of law and to the communities in which we are fortunate to live and work.” They’re moving on.