The name was Connery.

And nobody did Bond better. James Bond, that is.

The Scottish actor who died over the weekend aged 90 embodied a certain old-fashioned masculinity tinged with the unique ‘60s wit and whimsy that created an astonishing generation of mid-century Celtic hellraisers. Men like Connery and Peter O’Toole and Albert Finney and Richard Burton and Richard Harris and Michael Caine (who is luckily still with us). 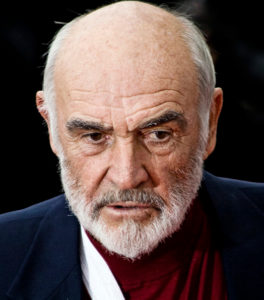 Connery wasn’t born to the martini stirred (actually, he didn’t even like martinis, preferring a good Scotch whiskey)

He grew up poor in Depression-era, working-class Edinburgh. His crib was a bottom drawer. He began delivering milk at age nine and left school at 13. He was a bricklayer, a movie usher, a coal man.  He joined the Navy (hence he tattoos, “Mum and Dad” and “Scotland Forever”).

He tried bodybuilding and represented Scotland in the Mr. Universe competition. He didn’t win, but his buff body got him into the chorus line of “South Pacific” where he sang, “There is Nothing Like a Dame.”

Nothing indeed. After a handful of middling movies – the Disney fantasy, “Darby O’Gill and the Little People” is actually quite charming; “Tarzan’s Greatest Adventure,” not so much – the dames came via “Dr. No.” And we were blessed with the sexiest superspy in the history of cinema.

But Connery prevailed, playing Bond seven times. Reportedly, his personal favorite was “From Russia With Love,” though it was “Goldfinger” that put him into the stratosphere.

Not surprisingly the role became a kind of golden trap. “Those were very, very demanding times,” he told me when I interviewed him (yes, I got lucky, but more on that later). “All the adulation and brouhaha really got way out of hand. The Beatles had the same thing going, but there were four of them to share it.”

He likened the situation to being named Sexiest Man Alive (which he was at age 60). “You really have to keep it at arm’s length,” he noted. “Otherwise, where do you go with it?” 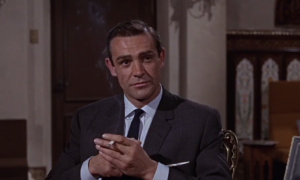 Ultimately Connery went exactly where he wanted to go with it. He went beyond Bond. Yes, there was a relapse, “Never Say Never Again” which was a play on the actor’s own earlier response when asked if he’d ever again don the Bond tux.

But he broke through Bond-age with a trio of films in the 1970s. As a romantic and dangerous Arab sheik in ‘The Wind and the Lion.” As an older, wiser, still legendary Robin Hood in “Robin and Marian.” And as a brash, rascally Kipling-esque soldier who intended to rule a remote mid-eastern kingdom in “The Man Who Would Be King.”

He won an Oscar for his crusty Irish cop in “The Untouchables.” Then, as Indy’s rogue-ish dad, he stole “Indiana Jones and the Last Crusade” from Harrison Ford.

And while not all his non-Bond pictures were hits, a good many of them were quite good: ‘Murder on the Orient Express,” “The Hill,” “The Russia House,” “The Great Train Robbery,” “The Name of the Rose,” “Entrapment,”  “Finding Forrester.”

One of his shrewdest decisions was to embrace autumnal early. He tossed the toupee and let the face lines show. In “Robin and Marian,” he and Audrey Hepburn (as Maid Marian) are perhaps the most gorgeous middle-aged medieval people ever seen on film

And about that interview…it was for another of his good movies, “The Hunt for Red October,” in which he played a Russian submarine commander opposite Alec Baldwin.

More than a hundred reporters had turned up, all on the hunt for the elusive Connery who famously did not suffer interviews gladly. Still, he was a pro and speaking to the press was part of the job.

When he walked into the Bel Age Hotel in L.A., all those jaded journalists were reduced to gibbering fans.

In a word, we gaped.

And I – being a small, sneaky, underestimated Southerner – ended up sitting right next to him.  Oh, and then he touched my arm.  He thought I looked cold. I eventually washed that arm, but it may have been years.

Sean Connery made movie-star charisma look easy, whether it was sleek or weathered, cocky or caring. And perhaps it’s because he could be so intimidating, you almost missed the humor.

When People Magazine crowned him Sexiest Man Alive, a lot of film writers wondered if men who are 60-plus and balding could, indeed, be more virile than most. I tried tossing that one at him and he leaned in and whispered, “Well, it’s years since I’ve been to bed with a 60-year-old balding guy.”

And then there was that twinkle.

Previous Article
When We Look Back at this Moment, We’ll Remember How Local Collaboration Won the Day
Next Article
Storm brewing over Atlanta’s draft flood-control rules