A scene from the "In the Heights" movie

Okay, as someone more into Wuthering Heights than Washington Heights, I’m hardly the target audience for “In the Heights,” the movie adaptation of Lin-Manuel Miranda’s pre-“Hamilton” 2008 Tony-winner.

Still, it’s difficult to resist a picture that makes up in energy and charm what it lacks in depth and originality. Set in Miranda’s old uptown neighborhood, “Heights” centers on bodega owner Usnavi (Anthony Ramos) who dreams of someday returning to the Dominican Republic to restore his family’s beach bar that’s been obliterated by a hurricane. 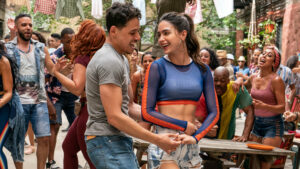 A scene from the “In the Heights” movie

That will take money, but what else is a lucky (maybe) lottery ticket for?

Nina (gorgeous Leslie Grace) has a different agenda. After some humiliating experiences at Stanford, she just wants to retreat. Hard to do when everyone, especially your proud immigrant father (Jimmy Smits), keeps referring to you as the one who made it out.

Both Usnavi and Nina have romantic distractions as well. He can’t get would-be fashion designer Vanessa (Melissa Barrera) out of his head while Nina and Benny (Corey Hawkins), a dispatcher at her dad’s car stand, keep striking sparks.

Other challenges include a heat wave, a blackout, and the seemingly unstoppable gentrification of the neighborhood. 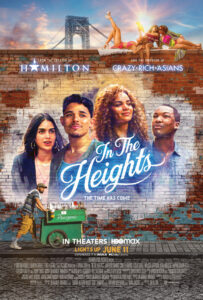 “In the Heights” movie poster

Though unabashedly traditional in form and themes (and gender stereotypes), “In the Heights” grabs you with its unique Latin rhythms and youthful cast. Aside from Smits, the only character old enough to remember when JFK was shot is Usnavi’s abuela (Olga Merediz, recreating her award-winning stage performance), a kind of substitute grandmom for the entire neighborhood. True, musicals are generally a young person’s game, but this cast’s joyful communal enthusiasm somehow seems special.

The cynic in me winced when Merediz apparently takes the A train to Heaven, but the romantic who’s always loved musicals sighed with a kind of dumbstruck pleasure. “In the Heights” is busy and loud and as relentless in its way as the aforementioned gentrification.

But it’s an important part of the whole Lin-Manuel Miranda Moment and at a time when a virus is trying to kick Broadway in its teeth, it’s nice to see Broadway kick back.

“In the Heights” currently is playing in select theaters, and it is available on “video on demand.”